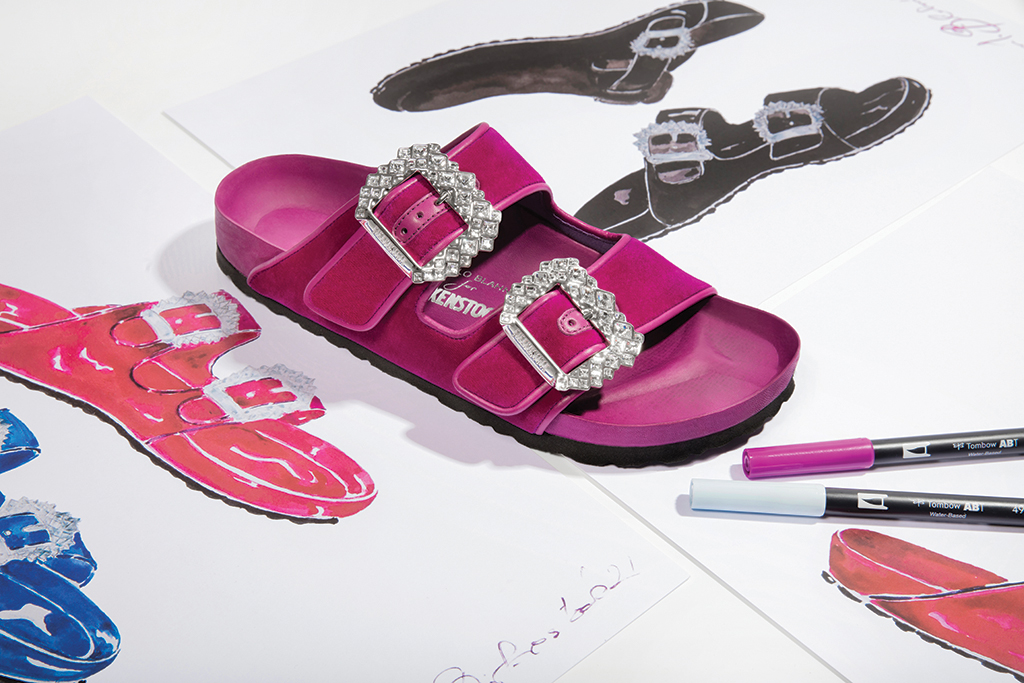 On Nov. 30, Manolo Blahnik for Birkenstock will be honored as Collaboration of the Year at the 36th annual FN Achievement Awards. Below is an article from the magazine’s Nov. 28 print issue on how the two storied footwear brands came together.

It was a perfect marriage of two footwear icons. The Manolo Blahnik for Birkenstock two-part collaboration was a sell-out event for fans and merged the comfort brand’s classics with the essence of the design master.

The hallmarks of the partnership were luxurious velvet uppers and crystal buckles, as well as playful polka-dot patterns on the signature cork-bottom sandals and clogs.

According to the design legend, the first styles from the collection sold out in 12 hours. “It was extraordinary, I couldn’t believe it,” Mr. Blahnik told FN. “I was stunned but thrilled that the collaboration was so well received globally.”

Birkenstock’s global CEO, Oliver Reichert, was similarly pleased by the response. “We still get messages from customers who couldn’t get hold of a pair,” he said. “Among them, also many men, which speaks to the boundless nature of this collaboration.”

The collaboration was part of the Birkenstock 1774 platform, which over the years has produced tie-ups with Dior, Valentino, Rick Owens, Proenza Schouler and more.

Mr. Blahnik and his niece and CEO, Kristina Blahnik, have been avid Birkenstock fans for years — even appearing in the brand’s spring ’20 campaign. The image, shot by photographer Jack Davison in Mr. Blahnik’s first store on Old Church Street in London, shows the designer — who gardens in Birkenstocks — wearing his Black Bostons with a favorite red suit from the London tailor Anderson & Sheppard. “Birkenstocks have been in my wardrobe since the very beginning (of time),” he said at the time. “I have loved and worn mine for many years.”

The campaign marked the beginning of a deeper collaboration meant to unite their design visions, according to Kristina Blahnik. “You’re bringing two houses together that have pure identities,” she said. “One of our key priorities is comfort in a different category.” To gain a deeper understanding, the CEO visited Birkenstock’s German factory just before the pandemic hit in early 2020. “There is a whole world behind the shoe. It’s amazing — the craft and the people who make it. It’s about celebrating that,” said Kristina.

The resulting pieces from drop one, which launched in March, centered around Birkenstock’s iconic Arizona and Boston styles, which were given a Manolo makeover in fuchsia and blue velvet and sparkling crystal buckles.

Drop two, which launched in May, saw the addition of a brand-new silhouette, the Rodra sandal, with a crisscross vamp and buckle strap in white calf hair printed with black polka dots. The same material was also used on the Boston style, while the Arizona in drop two was reimagined with an EVA sole and two transparent PVC straps.

According to Mr. Blahnik, the two drops were created as a whole, but with distinct stories. “It was decided that two releases would be more impactful — the first was rich in color and texture with the crystal touches and the second minimal and monochrome,” he explained. “My absolute favorite style was the polka-dot Boston from the second drop. It was Kristina’s, too, in addition to the Rodra. Spots have always been a signature motif of mine; I just adore them.”

Birkenstock’s Reichert noted that shared philosophies were are the heart of the partnership. “We may come from different ends of the footwear business, but what unites us is the pursuit of uncompromising quality and real craftsmanship in shoemaking,” he said. “This common ground, paired with mutual admiration and true curiosity for the ingenious, are what have made this collaboration successful.”

As for whether the two teams will come back for another round of shoes, Mr. Blahnik told FN, “I have learned to never say never.”