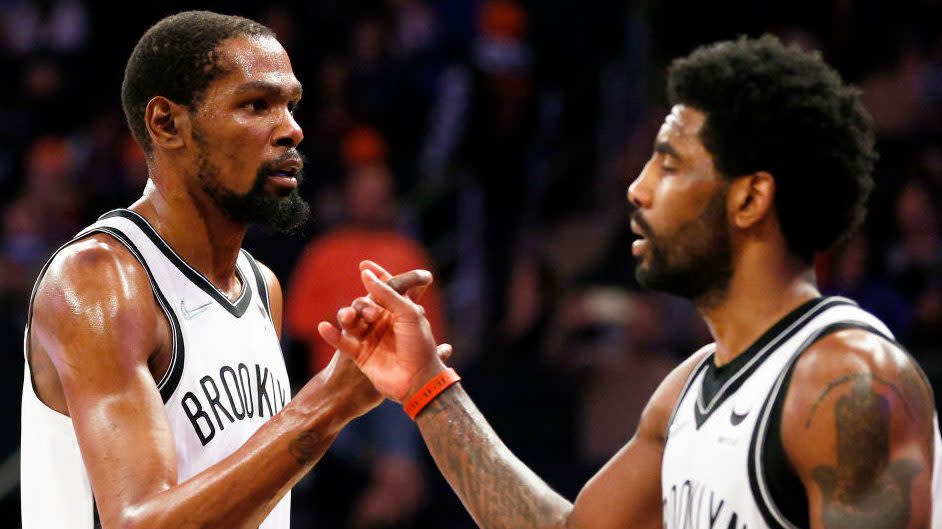 Kevin Durant brought chaos to the NBA offseason when he requested a trade out of Brooklyn. While much of the focus in the wake of his announcement was on the mechanics — Where will Durant be traded? What team can make the best offer? — there hasn’t been as much focus on the other big question:

Why did Durant ask out?

His only official public comment so far is a cryptic Tweet that answered nothing. Long-time NBA writer out of New York Howard Beck tried to answer the question, asked around for Sports Illustrated and got this response.

Those who know Durant cite two primary factors: a rocky Nets season that ended in a first-round playoff sweep; and the franchise’s soured relationship with Irving, his close friend…

As one insider sympathetic to Durant noted, “Kyrie sabotaged everything,” but Durant is reacting more to the effects than the cause, and he now views the Nets as unsalvageable. “There’s no use in (him) taking sides when it’s all too far gone,” the person said.

This fits with the reports Durant was frustrated Nets management didn’t get to know and understand Irving. Through it all, Irving expected a long-term max contract extension from the Nets, and Brooklyn management (finally) drew a line in the sand and said no. Irving was frustrated and unhappy but ultimately had no choice but to opt in with Brooklyn. And while fans will rip Durant for his stance, we’ve all done this — stood by our friend and took his or her side in a dispute even when we knew on some level they were wrong. Durant is just doing it on a larger, more public stage.

See also  Reunited and it feels so good? Count Warriors among teams interested in Durant

Make no mistake, before Durant brought the chaos to the NBA offseason, Irving brought the chaos to the Nets. During the 2020-21 season, Irving played 54 games and went AWOL/took personal time in the middle of the season. Last season he played in 29 games, primarily because he refused to get vaccinated, which violated a New York City workers mandate. Irving’s in-and-out of the lineup situation and lack of commitment to the franchise frustrated James Harden — not a man known as the king of commitment — and Harden forced his way out via trade.

Durant won’t see it that way. In reaction to all this, he has done what he always has done — and should do — and taken complete control of his career and steered the ship where he wants it to go. From the outside we may shake our head at his reasoning, but Durant feels for his friend and is doing what he sees as best.

The only question now is where the story ends — likely with Irving a Laker and Durant… TBD.

Why did Durant ask for a trade? Report suggests rough season, Nets’ poor relationship with Irving originally appeared on NBCSports.com