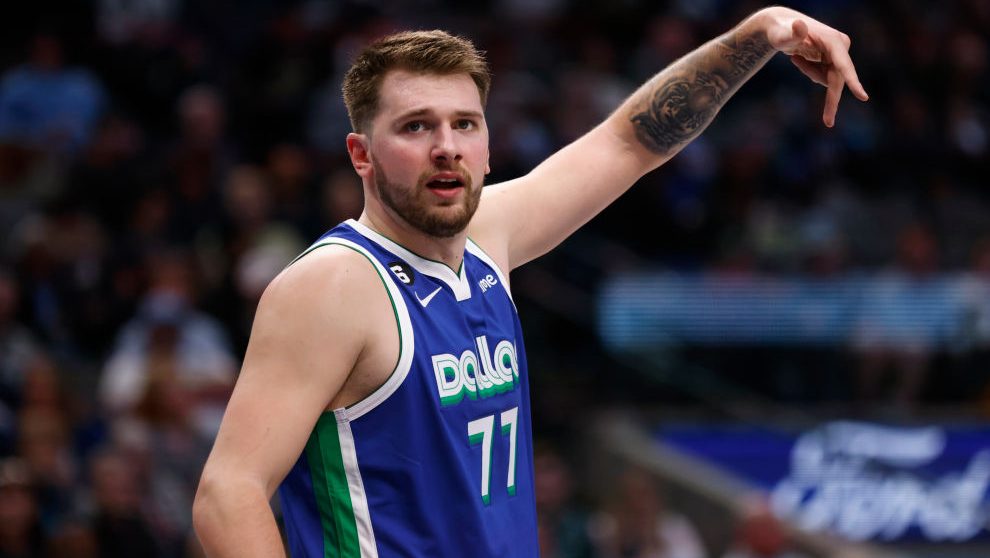 1) Luka Doncic looks like an MVP, but can he keep this up?

The schedule makers gave us a showdown of early-season MVP candidates but also two guys who have had to carry a massive load this season, waiting for their teams to come together around them. Curry has gotten more of that lately as Klay Thompson has started to find his legs and some rotation shifts have improved play off the bench.

Luka is still on a Brunson-sized island waiting for help. Tuesday night that island got smaller when Spencer Dinwiddie got ejected for an elbow to the face of the Warriors’ Jordan Poole.

That just meant more Doncic, and he reminded everyone why nobody wants to play the Mavericks in the playoffs with a 41-point triple-double (12 rebounds, 12 assists).

Doncic was a force of nature, although Curry had his chance in the final 10 seconds but got called for traveling (a call the Warriors disputed).

The Mavericks got the 116-113 win. Tim Hardaway Jr. pitched in 25 points, including five 3-pointers for Dallas, but this was the Luka Doncic show.

Doncic has been asked to carry a massive load for Dallas this season. He has a usage rate of 38 through the first quarter of the season, a number that would rank in the top-10 all time (right around 1987 Michael Jordan and 2006 Kobe Bryant).

How long can Doncic do this without starting to wear down? Without risking injury? Sure those other players like Jordan and Kobe got through the entire season, but they also didn’t make the kind of playoff runs Dallas is hoping for. Coming off EuroBasket, Doncic entered this season in the best shape he has ever been in to tip-off an NBA campaign, but there have already been stretches where he has started to look worn down. Then there are nights like Tuesday when he carries the Mavericks to a win and looks unstoppable.

Doncic is young, but asking him to carry this load also puts a ceiling on how good this team can be. Curry is getting that help. Giannis Antetokounmpo is also putting up historic usage percentage numbers this season, but Khris Middleton will return to the Bucks and take on some of that load. The cavalry isn’t coming for Doncic, not in the short term.

If the Mavs want to win in the postseason, it can’t just be the Luka show. But during the regular season, some nights that is enough. At least until he wears down.

The Portland Trail Blazers miss Damian Lillard (calf strain, his second this season) — they are 1-4 in the current five-game stretch without him, playing their worst defense of the season. The latest of those losses — a come-from-ahead loss to a Clippers team without Kawhi Leonard or Paul George — was maybe the team’s worst loss of the season. Anfernee Simons put up 37, the Trail Blazers led by 18 in the second half, and yet they collapsed against a team whose best offensive weapon was Nicholas Batum (32 points).

The good news for the Blazers is Lillard is due back on Sunday, reports Chris Haynes of TNT.

If you didn’t watch the late game on TNT, you missed a battle of two teams trying to keep their heads above water while their star (or stars) sit out injured.

Portland is still 11-10 on the season but has struggled this past week. What was ugly about Tuesday’s loss was the team just let go of the rope. This was a winnable game, but when it got tight they let go.

Powell scored 22 points in the fourth quarter and took over to get the 13-9 Clippers another win.

The MRI is in and Timberwolves big man Karl-Anthony Towns is out for weeks with a right calf strain, the team announced. Adrian Wojnarowski of ESPN reports Towns likely will miss 4-6 weeks.

Not good, but it looked a lot worse when it happened.

Towns has averaged 21.4 points and 8.5 rebounds a game, and while his stats are down this season — just 32.8% on 3-pointers — the team has struggled at times without him, particularly lineups with Rudy Gobert and Anthony Edwards together, an -11.8 net rating (in non-garbage time minutes, via Cleaning the Glass).

The Timberwolves are not off to the start they thought they would be, and if they don’t figure out a way to win without Towns the next month this season could get sideways on them.

Three things to know: Luka Doncic looks like an MVP, but can he keep this up? originally appeared on NBCSports.com