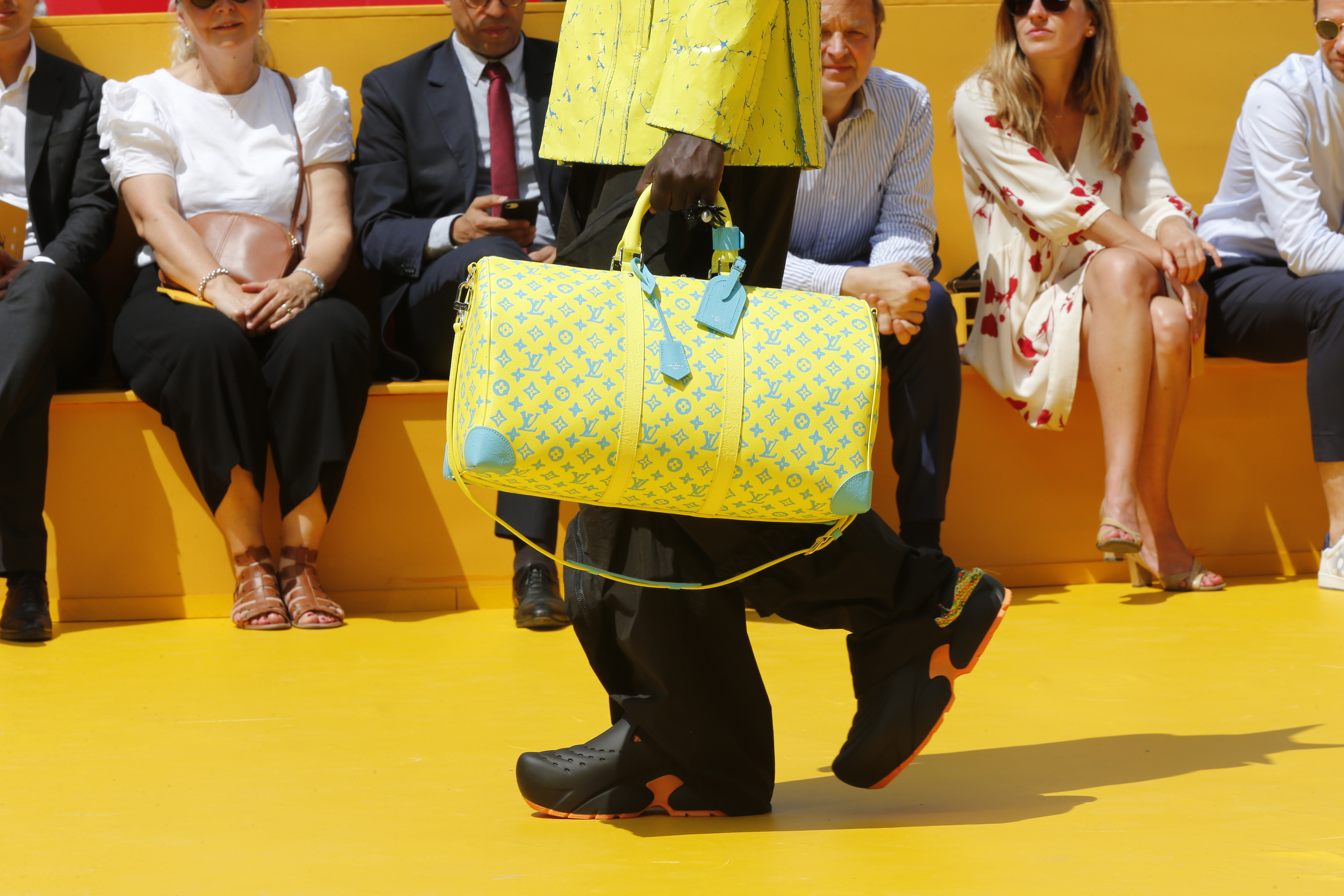 Around this time five years ago, a 38-year-old Virgil Abloh was unveiling his very first collection for Louis Vuitton as the brand’s artistic director of menswear, a groundbreaking line of colorful pieces that would come to redefine fashion and change the positioning of the luxury market forever.

Today, his friends, coworkers and fans continued to pay homage to the late designer, in an equally vibrant spring summer ’23 men’s collection for the brand that carried on Abloh’s legacy of creativity, innovation and use of color.

The front row as as star-studded as it was back in 2018, when friends Rihanna, Kanye West and Bella Hadid cheered on the designer as he became the first Black creative director at Vuitton and as such one of the biggest Black designers in the entire fashion industry. This time around, Naomi Campbell, J Balvin, Justin Timberlake and plenty of other names sat in the front row as a marching band kicked off the show, followed by the collection — and then a closing performance from music artist Kendrick Lamar, seated next to Campbell in the front row wearing a diamond-encrusted thorned wreath.

For all of the pomp and circumstance, the collection was also compelling as ever, continuing to offer new, exciting — but palatable to the masses — ideas from Vuitton, in an aggregation of statement pieces that were high impact on their own and even more so as a full look. Designed by the brand’s in-house studio team (a group formed largely by Abloh himself in his five years at the brand), the collection focused on the ideas of toys as tools for imagination, using a yellow runway as a sort of toy race car track meets Yellow Brick Road to showcase an aesthetic heavily influenced by Abloh’s love of ’90s skater culture.

The pieces themselves built upon some of the silhouettes that Abloh had begun to explore in the collections just before his death in late 2021. Trousers went even more relaxed (skater style, of course) with some suiting styles showing an extreme pleat starting high on the leg. Jackets were updated with new lapels, slight adjustments on the shoulders and chest fits. Both garments and accessories continued to explore the use of Vuitton’s signature monogram, using raised, tactile, braille-like treatments on a series of briefcases. Abloh’s exploration of gender was still there, too, but slightly more subdued this time, in modest below-the-knee skirts worn with suiting jackets (a look destined for an artists such as Balvin, who recently sported the silhouette). Details such as raw-fabric florals, sawtooth hemlines on shirts, paper airplane motifs and flower origami-like suiting buttons had a big impact.

On foot, influences from Abloh’s past design projects were even more powerful. Cartoonish, molded rubber boots were impossible to separate from the legacy of designer’s long collaborative relationship with Kanye West (the current king of the oversized boot, something that was inevitably transported to Balenciaga for its spring ’23 show). And upon closer inspection a series of lace-up snow boots (part of a spring summer collection, yes) were clearly snowboarding boots, a nod to Abloh’s passion for the sport.

The collection also touched on the idea of upcycling, the word itself redefined to include both the sustainability of materials but also of ideas. The goal?  “To de-programme our
minds from the images of obsolescence that lead to overload, overproduction and waste,” according to the brand’s show notes.