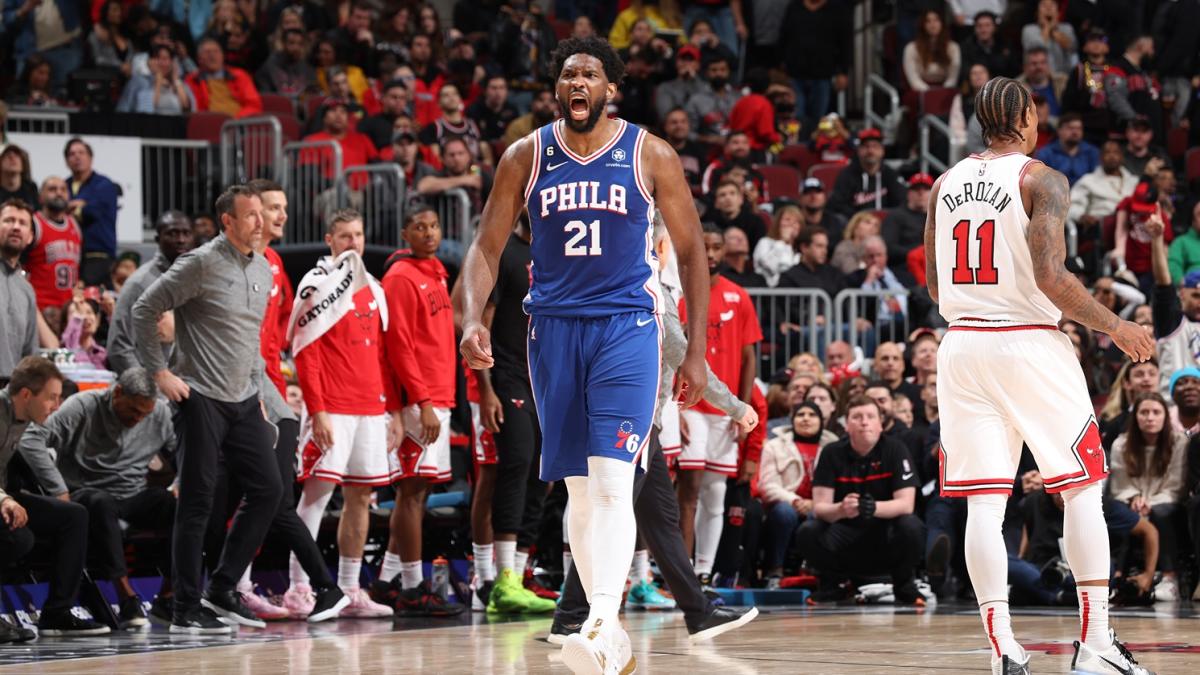 Joel Embiid’s unblemished career record against the Bulls was in serious jeopardy Saturday night in Chicago.

Fortunately for Embiid and the Sixers, his jumper was pure at the game’s most crucial moment.

With the game tied at 109-all, Embiid screened for James Harden (15 points on 2-for-13 shooting, 11 assists) and popped behind the arc on the left wing. He sunk his first three-pointer of the evening.

On the ensuing possession, DeMar DeRozan drove hard but couldn’t score on Embiid at the rim. P.J. Tucker then made an uncharacteristic blunder, throwing an outlet pass that Alex Caruso intercepted. Tucker and the Sixers were relieved to see Caruso miss a potential game-tying three-pointer. They moved to 3-4 this season with a 114-109 win at United Center.

Along with Harden, Georges Niang was the Sixers’ No. 2 scorer. He posted 15 points and made 6 of his 8 field-goal attempts.

The Sixers will finish their road trip Monday night against the Wizards. Here are observations on their narrow victory over the Bulls:

The 28-year-old contributed to a rough transition defense sequence early on. Chicago turned an Embiid giveaway into a layup when LaVine easily slipped behind the defense. However, the team has certainly been better overall in transition defense over its past two games compared to its first five. Just like on Friday, the Sixers’ opponent was credited with zero fast-break points in the first half.

A bit later, Embiid made a nice dish to Tyrese Maxey for a corner three. The 21-year-old was wide open thanks to one of the timely hammer screens P.J. Tucker is always eager to set. Overall, Tucker was excellent in the first quarter. He stonewalled Vucevic before stripping the ball away; scored a short jump hook on the next possession; and buried a corner three to extend the Sixers’ lead to 16-7. Embiid assisted a Tobias Harris triple to stretch the advantage to double digits.

In his first stint, Embiid played slightly over nine minutes and notched eight points on 4-for-6 shooting. The Harden-Embiid pick-and-roll looked borderline effortless. Embiid rolled well and, with Vucevic not providing much deterrence in drop coverage, Harden picked up five first-quarter assists. When the Embiid-Harden duo reunited in the first, Embiid short rolled, squared up Vucevic and knocked down a walk-in-the-park jumper from the foul line.

Embiid accumulated three quick fouls in the middle of the second quarter, forcing him to sit for the remainder of the period. Tucker replicated Embiid’s run of rapid fouling in the third quarter, rattling off three offensive fouls in an approximately two-minute stretch of overzealousness. The Sixers appreciate Tucker’s physicality and constant desire to seek out screens, but they obviously don’t want him to set moving picks on nights when their rotations are already comprised by key players’ fouls.

Vucevic also got his fourth foul late in the third and Chicago briefly played small ball with Derrick Jones Jr. at center.

As for Embiid, he wasn’t sharp to begin the second half. Vucevic made three long-distance jumpers early in the third, and he also forced one of Embiid’s five turnovers by knocking the ball from the five-time All-Star’s hands, off his leg and out of bounds. Embiid wasn’t at his best in the fourth either, but he ultimately came through when it was absolutely necessary.

Leaning on the bench

Matisse Thybulle was the Sixers’ first of six men off the bench and predictably began on LaVine.

Shake Milton also checked in during the first quarter and the Sixers went to an all-bench unit at the end of the period. Presumably, both Maxey’s foul trouble — and perhaps the fact he played 83 minutes over the Sixers’ two-game mini-series against the Raptors — factored into that lineup. That said, Sixers head coach Doc Rivers had indicated Monday that he planned to expand his rotation and Milton would likely have opportunities to earn more minutes.

The Sixers went ahead 32-19 on consecutive three-pointers from De’Anthony Melton and Niang. Melton then smoothly turned defense into offense, as he often does, dishing to Milton for fast-break layup.

Milton stayed on the floor even when Maxey returned early in the second quarter, although Maxey soon was whistled for his third foul. Saturday was the second straight night the Sixers employed a three-guard unit. Melton’s length and versatility should tend to make those units viable at times. Milton also isn’t shabby at all in terms of being able to guard multiple positions and play both on and off the ball offensively.

Not the prettiest, but Sixers find a way

With Embiid on the bench in the second quarter, the Bulls were emboldened to put pressure on the Sixers’ interior defense.

DeRozan cut a deficit as high as 19 points down to six with a twisting reverse layup. Harden tried to answer with a three but came up empty, falling to 1 for 7 from the floor, and Vucevic kept Chicago rolling by drilling a long-range jumper from the top of the key.

At that point, the Sixers’ veteran forwards prevented things from snowballing any further. Harris and Tucker each nailed important, crowd-silencing corner threes, and Melton made a driving layup. The Sixers entered halftime up eight despite DeRozan’s 20 points, Harden’s struggles from the floor, and Embiid and Maxey’s foul issues.

The Sixers’ stability was short-lived, though. The aforementioned foul problems played a part, but the team’s half-court defensive execution also slipped considerably. When the Sixers shifted to zone, they gifted Vucevic a wide-open three. DeRozan converted a mid-range jumper over Harris on the next play to give the Bulls an 81-76 edge. By the fourth quarter, the Sixers were sending full-on blitzes at DeRozan and asking other Bulls to beat them.

Maxey scored 14 points Saturday on 5-for-14 shooting, 30 fewer than his career-best mark the night prior. However, he did deliver a personal 6-0 run late in the third period, as well as an off-balance runner through contact that gave the Sixers an 85-83 lead.

Every positive play from a non-star Sixer felt essential because Harden struggled to create off the dribble in the second half and was frustrated by the lack of foul calls in his favor. He did draw a couple of veteran’s calls late in the fourth quarter, much to the chagrin of the Bulls and the home crowd. The 33-year-old went 11 for 11 from the foul line.

Embiid also received a generous call with 61 seconds left but missed both free throws. He was 6 for 9 on the night and now has 2,589 made foul shots in his career, tied with Moses Malone for seventh on the Sixers’ all-time list.

Montrezl Harrell did well as Embiid’s backup early in the fourth, taking two charges and jamming in a dunk off of a Harden feed. Niang also made several crucial plays, including a mildly surprising runner and a catch-and-shoot wing three that put the Sixers up 99-95. Niang doesn’t tend to look great when he tries to grab defensive rebounds or step in for charges, but he’s always glad to fire jumpers. The Sixers are surely thrilled he made most of them Saturday night.