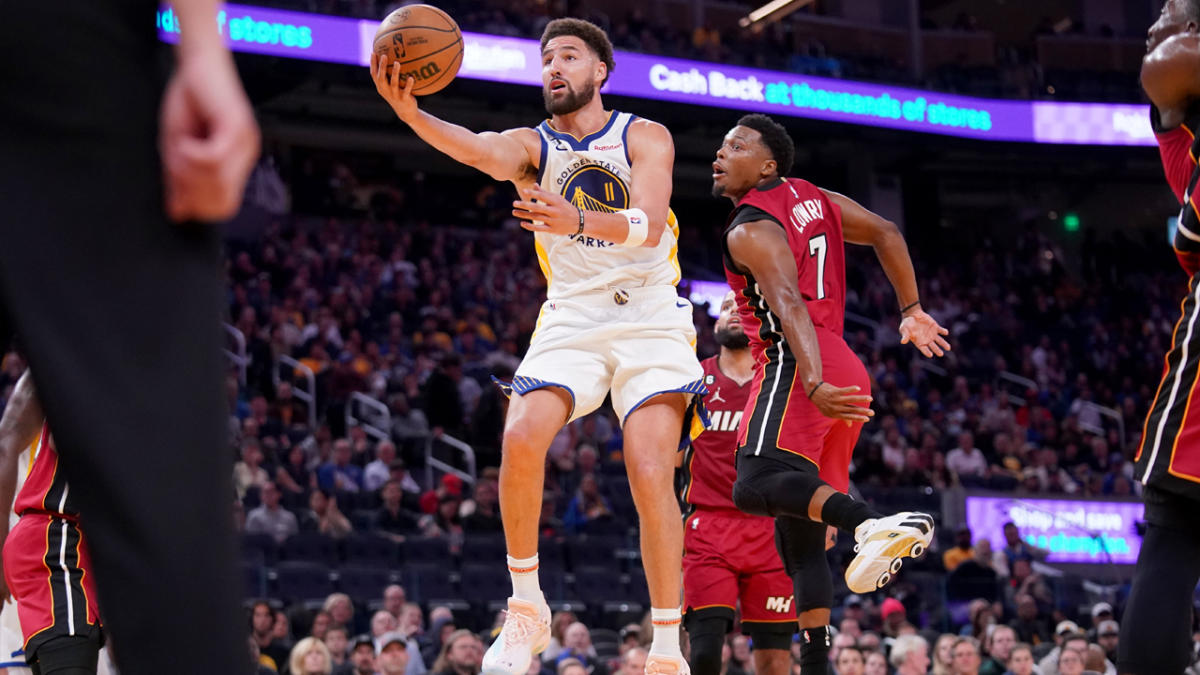 In the midst of a slow start to the 2022-23 NBA season, Klay Thompson had been stewing for a few days. He let out some of his anger Tuesday night when he was ejected during the Warriors’ loss to the Phoenix Suns.

The rest of Thompson’s pent-up frustration came out at the end of his postgame press conference following the Warriors’ bounce-back win over the Miami Heat on Thursday night at Chase Center.

The Warriors’ shooting guard caught wind of comments made by TNT’s Charles Barkley after Golden State’s 29-point loss to the Suns, and two days later, after answering questions from reporters, Thompson ended his press conference by calling out the Naismith Memorial Basketball Hall of Famer.

“I’ve got one thing to say,” Thompson said after the Warriors beat the Miami Heat 123-120 on Thursday night at Chase Center. “So, it hurts when someone like Charles Barkley, with the platform that he has, says you’re not the same player prior to the injuries you had. It’s like ‘No, duh, man.’ Consecutive years, like. I tore my ACL and Achilles in consecutive years and still helped the team win a championship. It hurt hearing that because I put so much freaking effort to get back to this point. It’s hard to even put into words what I had to do to be the player I am today.

“I played 55, 57 games in three years. Give me some freaking time to get that back. To hear someone say ‘Oh, he’s not the same player as he was prior to the injuries.’ Like, duh. Who goes through that and comes back…I don’t know, it just hurt my heart hearing that. But you know, I’m going to internalize it and it’s going to be fuel for me to be even better. I’m very proud of what we accomplished last year and I feel like I was a huge part of it. I’m not going to let these injuries be a crutch for me. I’m just going to keep going and I’m going to have a great year. You can bet on that.”

Thompson wasn’t playing well against the Suns when he began jawing with Devin Booker. In the third quarter, Thompson was ejected, finishing with just two points in the loss.

Shortly after the game, Barkley felt emboldened to go on a rant about Thompson and Draymond Green.

“This team is older, Ernie [Johnson]. That’s what’s really happening to them,” Barkley said on “Inside the NBA” on Tuesday. “They’re older. Go back and look at the Finals, who were the guys that helped them win? It was [Andrew] Wiggins and [Jordan] Poole … it’s going to be up to those young guys, [Jonathan] Kuminga, [Moses] Moody, Poole and [James] Wiseman. Because I think, as much as I love Klay, he’s slipping. Same thing with Draymond. They’re not the same. In the Finals, you can see they’re not the same guys they were two or three years ago. So when I watch the Warriors play, I say ‘oh man, Father Time is knocking on the door of a couple of those guys.’

“These guys have won four championships, that’s like playing two or three extra seasons,” Barkley continued. “They’re passed 30 (years old), you factor in Klay who’s had two major surgeries. I think you saw tonight he’s like ‘this young boy is kicking my ass, ain’t nothing I can do about it.’ There was a time when Klay Thompson was the best two-way guard in the NBA and he’s not the same guy and that’s because of injuries. Is he done? No, I don’t think he’s done. I think he’s slowing down and it’s catching up with him, that’s why he’s frustrated.

“I think the same thing with Draymond, he’s slowing down, we just saw in the Finals. Because his game is dictated on energy and once you get past 30, you start losing — especially if you play deep in the playoffs every year — that’s why I said Steph [Curry] got a lot more work to do now, those young guys really are going to have to step up or this team is not going to win the championship if those young guys don’t start carrying the team.”

Thompson rebounded with a 19-point performance against the Heat. He shot 6-of-19 from the field and 5-of-14 from 3-point range.

Steph Curry was asked about Thompson’s postgame comments and noted that he felt his backcourt mate had been in a good mood all day long, likely because he was fueled by what Barkley said.

“The comments are part of our success, like you’re always going to be in a spotlight and people care about how you’re playing and care to comment positively or negatively because they know that will move the needle,” Curry told reporters after the win Thursday. “And when you say certain names, people are going to pay attention. But it’s interesting because certain guys forget what their careers looked like on the back end. So you can kind of cast and throw those stones but Klay’s still in here, like you said, helping us win a championship after the two hellish years that he had.

“And now, it’s just balancing, for him, the expectations of what he was before the injuries and what he can get back to, all the while maintaining his impact on winning. I’m sure he’s comparing to the stat lines and percentages and all that, but I think I heard coach [Steve Kerr] talk about it earlier. He’s gone through this, even before the injuries, where slow starts don’t really hold him down, don’t kill his confidence. But when you come off a championship, you have such a hunger and a desire to get back to what he wants to be personally. And he’s going to get there. It’s just a matter of sticking with the program, the time that he puts in. His competitive fire that comes out every single night. And he’s going to make shots. We’re not worried about that. It’s a long season.”

Thompson’s stated personal goal is to return to his NBA All-Star form, and he knows it will take him time to get back to that level. He just wishes Barkley understood that.