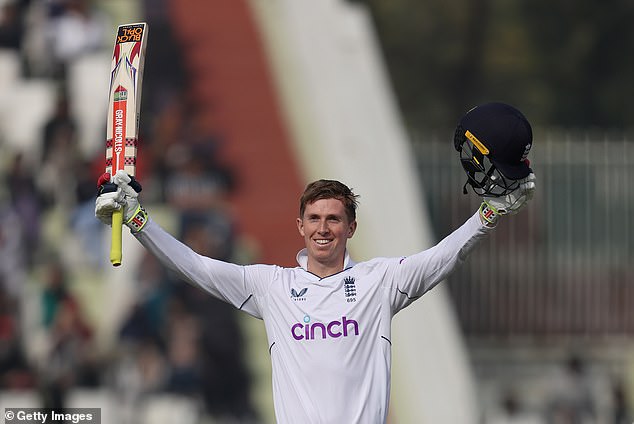 Zak Crawley set England on the path to a record-breaking day of Test cricket, then suggested their next goal was to ‘get a big one and score a thousand’.

See also  Dinesh Karthik not a finisher? Srikkanth gives a massive statement on Karthik's role in the team

He immediately added that he was joking, but if the adrenaline was still pumping after England amassed 506 for four against Pakistan, then no one could blame him. No one was prepared to say he was talking nonsense, either.

‘I’ve never seen a day like that, said Crawley. ‘It’s a record for day one of a Test, so it was unbelievable.

‘It was obviously a good wicket to bat on, but it’s more about entertaining the crowd than winning. Winning is great, but part of our goal is to make people want to watch Test cricket and hopefully that’s happening.’

Ollie Pope, the third of England’s four centurions, admitted that he and Harry Brook (the fourth) had drawn strength from Crawley’s punishing opening stand of 233 inside 36 overs with Ben Duckett (the second).

‘It started from the get-go, with 14 off the first over and that put them under pressure straightaway,’ Pope told Sky Sports. ‘They panicked a little bit, and it looked like there wasn’t anywhere they could bowl to those two. It’s an ideal start to the tour.’ 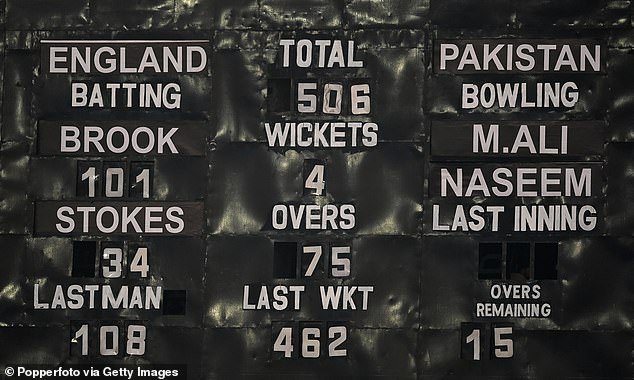 Brook, meanwhile, could also celebrate hitting the occasional left-arm spin of Saud Shakeel for six fours in an over – a first in Test cricket by an England player.

‘They were all bad balls,’ he said with a smile. ‘I just tried to put them away, really. I was probably happier with that than the hundred, to be honest.’

Duckett had been the only one of the quartet to be struck down with the virus that had swept through the England camp and threatened to delay the start of the Test. 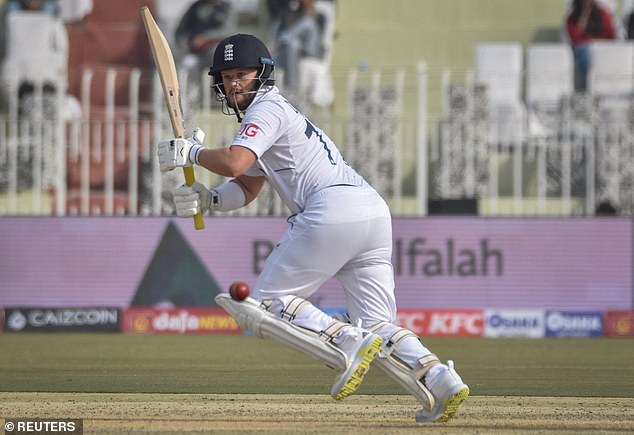 ‘It all happened really fast,’ he said. ‘Towards the end of Tuesday night it just came on. I felt fine going to bed and I found out next morning that there was about 13 or 14 others.

‘It wasn’t the best build-up to a Test match and certainly not the best for me, in my first one back for six years.

‘But it would have taken a lot for me not to come to the ground and play, and Stokesy said: “Let’s get out there and let’s take them on.”’