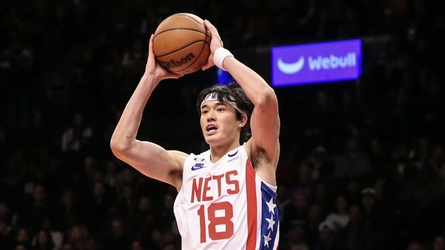 Watanabe suffered a sprained left ankle, according to Brooklyn, early in the second quarter and was ruled out for the rest of the contest.

Royce O’Neale entered for Watanabe at the second quarter’s 9:15 mark and the Nets holding a 35-34 lead.

The Nets trailed the Mavs 53-50 at halftime.

In five minutes off the bench, Watanabe scored three points on 1-of-3 shooting from long range.

Ben Simmons (knee) will return to game action on Monday when the Nets play the Dallas Mavericks, he told reporters.

Simmons said he “feels great” and thinks he will be limited to about 20 minutes during his return.

Simmons did not travel with the Nets for their games against the Wizards on Friday in Washington, D.C., and the Hornets in Charlotte on Saturday, and has missed four straight games.

Simmons is averaging 6.2 points, 6.5 rebounds, and 7.3 assists over 31.8 minutes per game over six contests this season.

Nets interim head coach Jacque Vaughn said after Friday’s win against the Wizards that Joe Harris (ankle) and Seth Curry (ankle) will be available for Saturday’s game against the Hornets in Charlotte.

Harris played Friday, but as he comes back from ankle surgery the team is being cautious with his minutes. Curry has been dealing with an ankle injury and has missed the last three games.

The Nets announced that Ben Simmons is out for Monday’s game against the Indiana Pacers due to left knee soreness.

The team hopes that Simmons will return to the court Tuesday against the Chicago Bulls, according to The Athletic’s Shams Charania.

Prior to Monday’s game against the Pacers, the Nets downgraded both Ben Simmons and Seth Curry.

Simmons was originally not on the injury report, but has seen been designated as questionable for Monday’s game with what the team calls left knee soreness. Simmons did play in all six of Brooklyn’s games this season, including 35 minutes in Saturday’s loss to Indiana.

Curry, who has been dealing with an ankle injury that cost him the first week of the regular season, was downgraded from questionable to out. He’s played in just one game this season, so far.

The team did report that this is a part of their injury management with Curry.

With tipoff approaching between the Nets and Pacers at Barclays Center, Brooklyn announced that guard Seth Curry is officially available to play.

Curry, who has been recovering from a left ankle injury, will look to help the Nets break a three-game losing skid, as they’ve started the season just 1-4.

The Nets listed Seth Curry (ankle) as questionable for Saturday’s game at home against the Indiana Pacers.

Curry has yet to play in a game this season as he recovers from a left ankle injury.

The 32-year-old did not commit to playing on Saturday, but plans to go through his pregame routine to see how he feels before tip-off, according to The Athletic’s Alex Schiffer.

Seth Curry (ankle) traveled with the Nets for this week’s two-game road trip but will not play in Monday’s 8 p.m. matchup against the Memphis Grizzlies or Wednesday’s 7:30 p.m. battle versus the Milwaukee Bucks, Brooklyn head coach Steve Nash explained.

The Nets return to Brooklyn for a four-game homestand that starts with a 7:30 p.m. tip-off Thursday against the Dallas Mavericks.

Back-to-back 7:30 p.m. starts with the Indiana Pacers follow Saturday and Monday, before Tuesday’s 7:30 p.m. finale versus the Chicago Bulls.

Prior to Friday’s game against the Toronto Raptors, head coach Steve Nash gave an update on Seth Curry (ankle).

Nash believes that Curry will be able to travel with the team next week when they face the Memphis Grizzlies and Milwaukee Bucks. It’s yet unclear if or when he’ll play on the upcoming trip.

Joe Harris (foot) is activated for Friday’s game, but will come off the bench.

Joe Harris (foot) is being listed as probable for Friday’s game against the Toronto Raptors, according to ESPN’s Adrian Wojnarowski.

Harris was inactive for Wednesday’s season opener against the New Orleans Pelicans, even though the sharpshooter hoped to make his return for the first game of the season. The 31-year-old played in just 14 games last season before undergoing surgery.

Nets coach Steve Nash gave an update on Joe Harris‘ progress Wednesday prior to the team’s preseason game against the Milwaukee Bucks.

Harris underwent ankle surgery in November 2021 and had another procedure done in March 2022, and will look to get back on the court in almost a year.