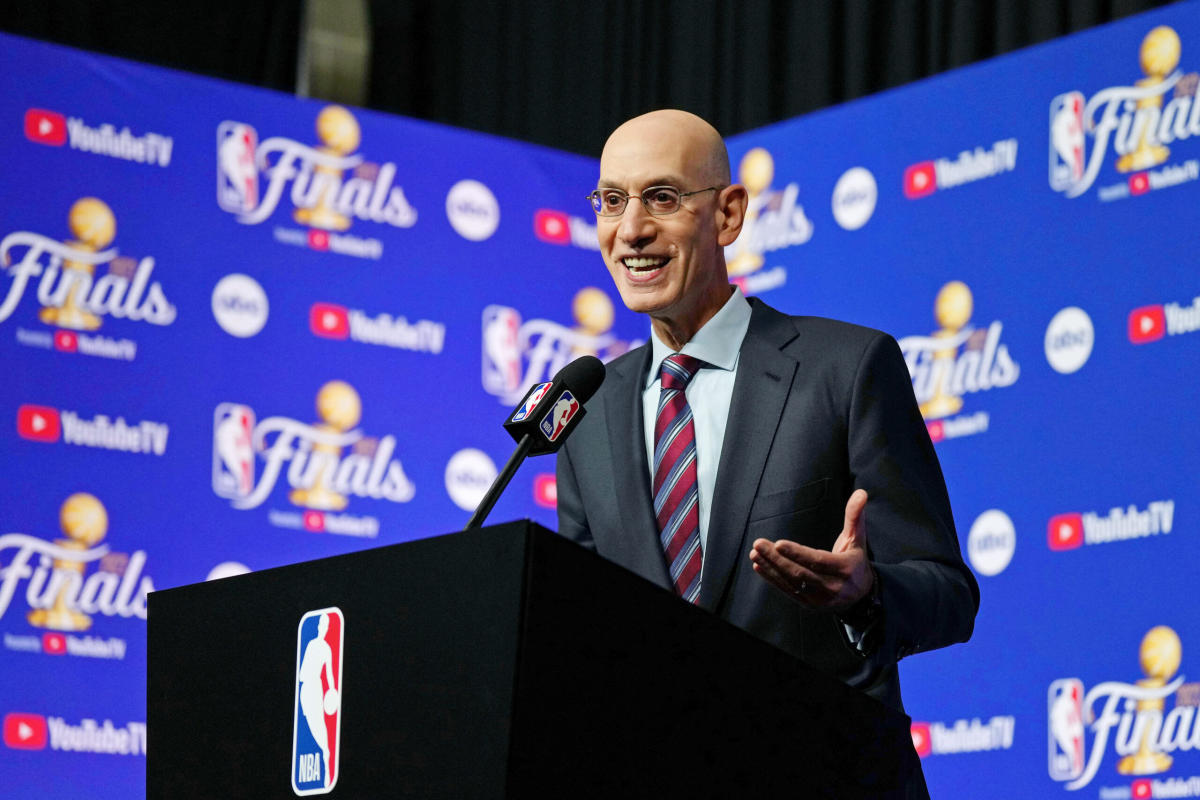 According to ESPN’s Adrian Wojnarowski, the NBA is pursuing an “upper spending limit”, or a hard cap. Unsurprisingly, it has already been met with significant resistance by the NBPA.

It’s understandable why owners would want this. As Marc Stein points out in his report on the subject, a hard cap would limit the exorbitant spending big market teams like the Warriors make. However, putting a cap on total player salaries would limit the amounts certain players can make while also falling short of significantly adding more parity to the league.

Below we analyze the current luxury tax system and how a hard cap could fall short.

That question may very well be summed up in this tidbit by Stein:

Sources like say that an appetite for the USL [upper spending limit] not unanimous among the league’s 30 clubs. Word is that there are some resistant teams out there fearful that an actual payroll line that absolutely can’t be crossed, as opposed to the template in operation now that relies on the luxury tax and repeater tax to do the job of a hard cap, could make it even harder to retain their best players.

The luxury tax system was implemented as a measure to limit team spending, and thus make the league more balanced. It first started out as dollar-for-dollar where teams paid an additional dollar for every dollar they were over the luxury tax threshold.

The system was revamped following the 2011 lockout with higher dollar-for-dollar penalties and tiers where teams pay higher amounts for every $5 million increment they go over the threshold. It also added the repeater tax designation which increases each tier by an additional $1 for teams that have been taxpayers in three of the last four seasons. The payments are then put into a pool at the end of the season with half of it being distributed evenly to non-taxpaying teams.

The nature of the tiered system often allows tax payments to accelerate to very high amounts. This year is projected to have the largest luxury tax pool in history: $696.5 million from 10 taxpaying teams, which would lead to a $17.4 million distribution to the 20 other teams. There’s a good chance that figure will decrease with taxpayers potentially looking to save money and the Sixers getting out of it completely since they’re just $1.2 million over.

Of this year’s projected $696.5 million distribution, 61.6 percent of it is coming from just three teams: the Warriors, Clippers, and Nets, all of whom are projected to pay over $100 million each. To put in perspective how punitive the current system is, the Warriors’ $176.5 million luxury tax payment is only $14 million less than what they’re actually paying their players this season.

The now two-decade system has boiled down to this simple understanding: teams that are willing to pay it can spend as much as they want while the rest collect some money from it. It’s clear that as nice as a $17.4 million check at the end of the season is, the free money isn’t satisfying non-taxpayers anymore.

When the system was implemented 11 years ago, no one envisioned teams willing to spend over $100 million in luxury tax penalties to compete at the highest levels. Yet as Basketball Related Income (BRI) has exponentially grown, so has the tenability of a team paying nearly the equivalent of their total player salaries in luxury tax payments. If the current luxury tax system was meant to act as a proverbial hard cap, then it is now outdated for the types of teams whose spending this system is intended to control.

With the NBA set to generate even more revenue over the next few years, certain aspects of the CBA do need to be worked on to adjust to the additional money coming in, including the luxury tax system. And while a hard cap could solve a lot of these issues, it will be a hard sell to make to the players.

Arguments against the hard cap

According to Wojnarowski, the new proposed system would eliminate the luxury tax system entirely. However, there are no additional details as to any other changes that could be made to accommodate such a shakeup, such as the potential elimination of Bird rights for a pure cap space league like in the NFL, or any possible modifications to the minimum or maximum player salary.

These details may be vital because how certain teams build their rosters could impact certain players. A hard cap wouldn’t take away overall revenue from players. As negotiated in the CBA, players are entitled to 49-51 percent of BRI. But how much of that money is spent and to who could be impacted by a hard cap.

As ESPN’s Bobby Marks notes, 86 percent of players earn $19.9 million or less this season. The current system under the soft cap allows non-maximum players to earn as much as the open market would pay them. If there’s a hard cap there would also need to be measures made so as to not take away money from these players.

But can a hard cap level the playing field that much more? According to Wojnarowski, there is already some skepticism on that as well as some concerns that it can actually hurt the teams it aims to help:

Beyond the NBPA, there is also skepticism among smaller NBA marketplaces who worry that an upper spending limit would fail to create the competitive parity that the league is hoping to achieve, instead causing well-constructed smaller market teams to have to break up cores of contending talent despite a willingness to enter into the luxury tax, sources said.

A top-heavy contender with multiple maximum-salaried players might need to make sacrifices under a hard cap, and the best example of a small-market team with this model are the Nuggets. They have three maximum-salaried players, including Nikola Jokic set to earn the supermax. Under a hard cap, other core Nuggets could be forced to leave money on the table to remain with the team or become cap casualties.

In regards to leveling the overall playing field, the NBA’s desire for parity-nirvana might not be more than a fantasy at the moment. It can be argued that the current level of talent in the NBA is at an all-time high while also having its highest level of parity. And this sentiment can be felt despite the potential tank wars that could commence in the second half of the season.

Despite the high level of talent all around it is still really hard to build a really good basketball team. The draft is only two rounds, which leaves teams with little room for error when making selections. And historically, the game is dominated by stars, which often requires luck to get. It’ll take a while for the basketball development farming system to evolve and start producing an abundance of talent able to expand the draft and sustain ultra-parity.

A hard cap league could allow teams at the bottom to string together the most competitive team they can, but the difficulties of team building will remain. Factor in the current draft system (which has its own anti-competitive challenges but that’s a different time and place) and it’s really hard to see if a hard cap will significantly improve parity around the league. The only “parity” a hard cap is guaranteed to achieve is bringing teams like the Warriors down a notch.

The hard cap is being proposed because the current luxury tax system fails to stop extreme spending at the top, but a hard cap might actually fail to make the league much more balanced while possibly hurting non-max players.