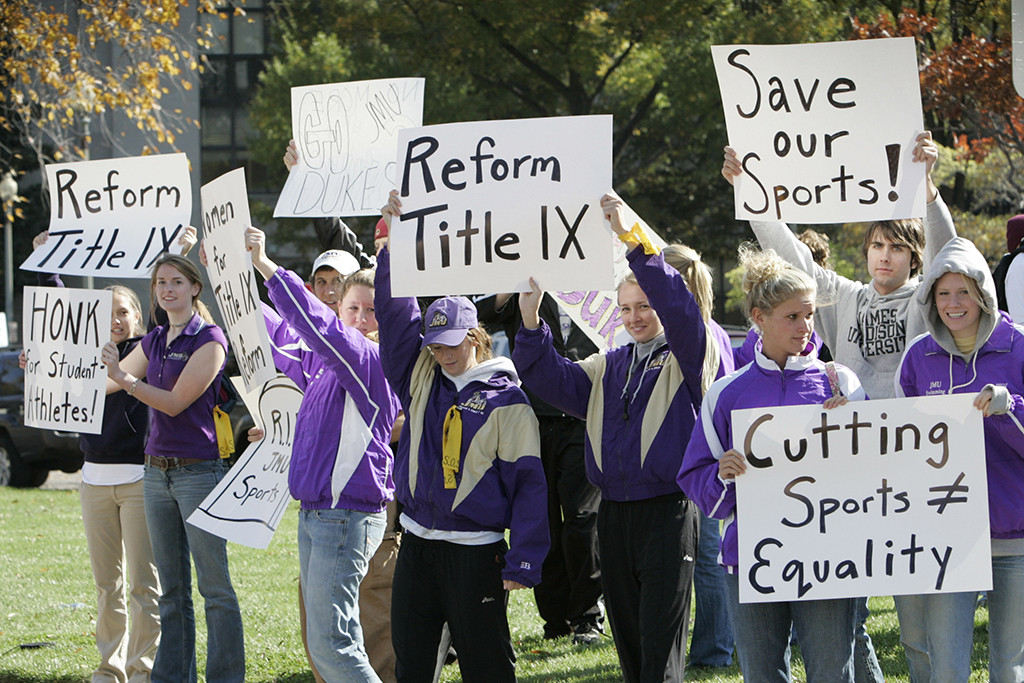 It’s been 50 years since Title IX’s 37 words changed everything.

“No person in the United States shall, on the basis of sex, be excluded from participation in, be denied the benefits of, or be subjected to discrimination under any educational program or activity receiving Federal financial assistance,” Title IX of the Education Amendments Act of 1972 declared.

It was just the beginning of a hard-fought battle to push for equal rights in education and athletics for women, with pioneers such as Billie Jean King and Gloria Steinem leading the charge.

Since Title IX, women’s participation in college athletics has increased. Women make up 44% of all NCAA athletes — compared to 15% pre-Title IX, for instance. It was a time when fewer than 30,000 women played college sports, according to a NCAA Sports Sponsorship and Participation Report. Despite this progress, however, women’s collegiate athletics still lag behind men’s, where men have 60,000 more collegiate sport opportunities compared with women, per the same report.

Though the battle continues, advocates say now is the time to celebrate the accomplishments of the women who led this fight for equality. And more importantly, they add, Title IX isn’t just a sports law — it’s a civil rights law standing in plain site.

“It’s horrifying to hear how women were spoken of [50 years ago],” said Dawn Porter, co-director of ESPN’s “37 Words” docuseries. “Women couldn’t go to law school because there were quotas, sports scholarships didn’t exist, [but we have] to stop to celebrate what we accomplished. We shouldn’t settle but celebrate that we have power.”

To celebrate the 50th anniversary, ESPN’s four-part series charts the Title IX impact on American culture and the lives of women who paved the way. Parts 1 and 2 premiered on June 21, with parts 3 and 4 set to air on June 28.

Porter, who directed the project alongside Nicole Newnham, said it was a privilege to bring attention to athletes such as the 1976 Yale Women’s Crew team that protested unequal treatment, Olympic sprinter Wyomia Tyus and the 1999 U.S. Women’s World Cup Soccer team. “Women today are standing on the shoulders of these women before them to fight these battles,” she said.

Newnham added: “The thing I love the most about the series is that it’s a story about women helping women, and women looking to the next generation and saying, ‘I may not benefit from this action, but the girls behind me might.’ And that’s exactly what’s happening. We are still fighting the same fights.”

For Molly Kazmer, the first player signed to the Women’s Professional Basketball League in 1978, charting new territory for women athletes didn’t go unnoticed. “We were aware that we were paving the way for the future,” she said. “We had to overcome society’s stereotypes of female athletes and get people to take us seriously.”

The Women’s Professional Basketball League only lasted three years and it wasn’t until the NBA established the WNBA in 1996 that women could play professionally again after multiple failed attempts during the years in between.

“We all just loved what we were doing. We were so happy to be the pioneers of the sport,” Kazmer added, noting her salary contract was only $6,000 per year. “It’s amazing we’ve made progress, but it’s a constant battle. Pay has a long way to go but as long as we are making progress in those other areas, [such as more media attention and on-the-court opportunities], then the pay will eventually catch up. We have to keep at it.”

Meanwhile, the next generation of changemakers includes athletes such as Paralympian Jessica Long. Born with fibular hemimelia, Long’s legs were amputated below the knees at 18 months old, so she could be fitted for prosthetic legs, learn how to walk and ultimately swim. Since then, Long has earned recognition as the second-most decorated U.S. Paralympian with 29 medals and 52 world champion medals in swimming. She has also been an advocate for a fully-realized Title IX and access and opportunity for all.

“The generation before us is the inspiration that keeps me going,” said Long, who participated in a Capitol Hill briefing and discussion on Title IX for legislators, policy makers and advocates in Washington D.C., today. “I truly feel that it’s my next role as a Paralympian athlete to grow the movement. They’ve done their part as trailblazers for women in sports, now it’s my turn to continue the legacy.”