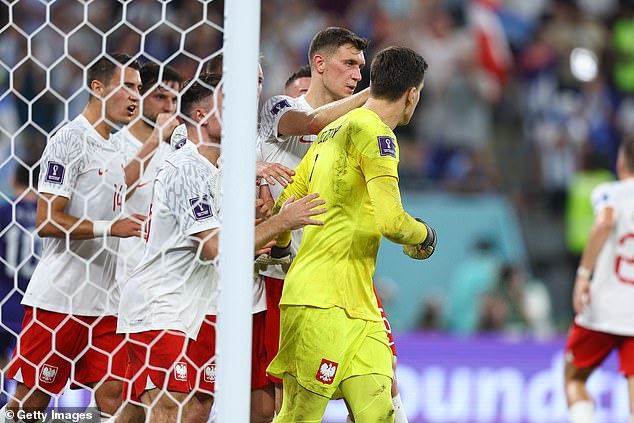 Wojciech Szczesny has revealed he knew which way Lionel Messi was going to go with his penalty by the way he approached the ball.

Messi missed what had appeared to be a decisive spot-kick in the first half as Argentina chased the goal to ensure their safe path to the last-16.

On a night of high drama in Group C, goals from Alexis Mac Allister and Julian Alvarez ensured Argentina finished top of the group – with Poland advancing with them by virtue of a superior goal difference to Mexico.

Speaking after the game, Szczesny admitted he ‘owed it’ to his team to save Messi’s effort from 12 yards having given away the penalty for a foul on the Paris Saint Germain star.

‘Now I can say that I knew where Messi would shoot, but at the time I wasn’t so sure. Leo looks at the keeper on some penalties and hits hard on other,’ he said.

‘I knew that if he was going to hit hard, it would be more to my left. I saw that he was not stopping, so I went, I sensed, I defended. 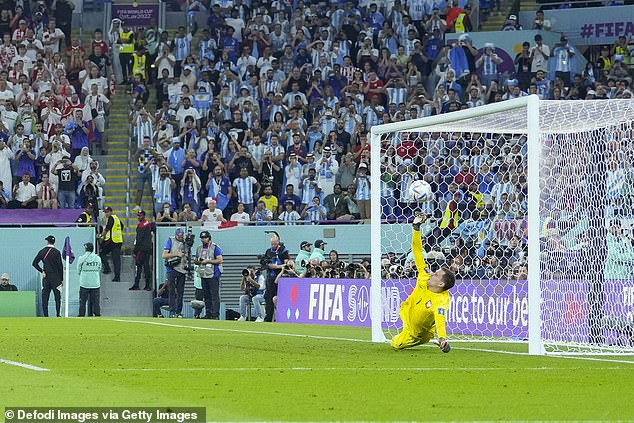 ‘I’m happy because that penalty gave something in the end. Very big satisfaction. I owed it to the team.’

He had also said after the game that you need some ‘luck’ when facing Messi from 12 yards.

On the penalty award, Szczesny, perhaps understandably, doubted the awarding of a spot-kick but said it gave him an opportunity to ‘show off’.

See also  Liverpool have been 'papering over the cracks' for MONTHS, says Steve McManaman

‘I immediately told the referee that I touched him (Messi) with my hand in the face, but I only hit him on the side of his face,’ the Pole said. ‘I told him there was contact but I don’t think there is a penalty. The referee decided otherwise and that’s fine – I could show off.’ 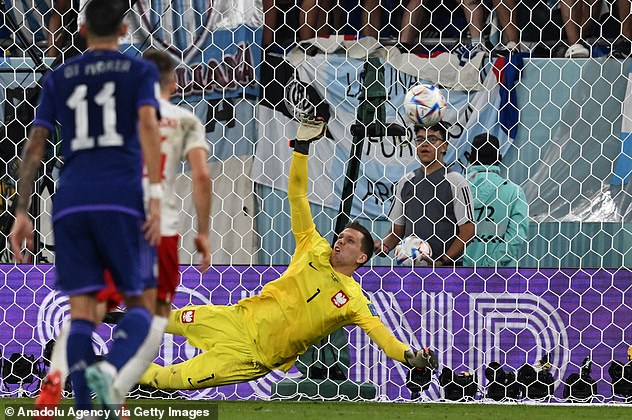 Speaking to Norwegian broadcaster TV 2 Sport post-match, the former Arsenal goalkeeper revealed the details of his and Messi’s bet before jokingly admitting he may now be ‘banned’ by FIFA for breaching betting rules.

‘No I didn’t [think the penalty would be given],’ said Szczesny.

‘We spoke before the penalty and I told him I can bet him €100 that he wasn’t going to give it.

‘So I’ve lost a bet against Messi. I don’t know if that’s allowed at the World Cup. I’m probably going to be banned for it. I don’t care right now.’

For a significant part of the evening, Poland looked to be advancing to the knockout stage for the first time since 1986 by virtue of having received fewer yellow cards than Mexico – who they drew 0-0 with in their opening game. 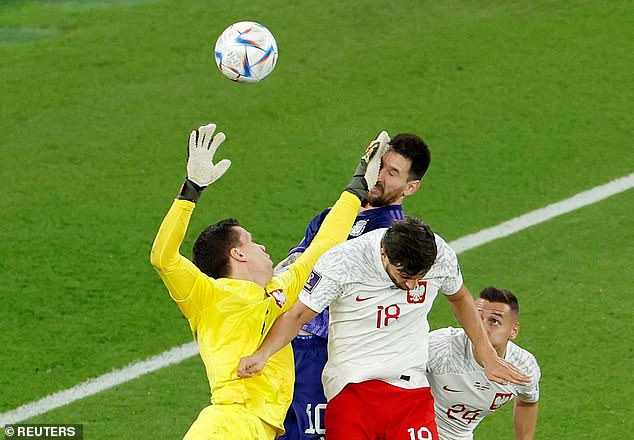 Admitting after the game that Poland are not of the same ‘calibre’ as Argentina, Szczesny said that ‘for the first time I am happy to lose’.

‘It was hard because we played against a team not of our calibre,’ he said.

‘He can hold the ball for 90 minutes and not let us smell it. It’s fun to play against such teams, once in 100 you will win. Today I failed, but I think for the first time I am happy to lose.’

Poland face France on Sunday bidding to reach the quarter-finals for the first time in their history.