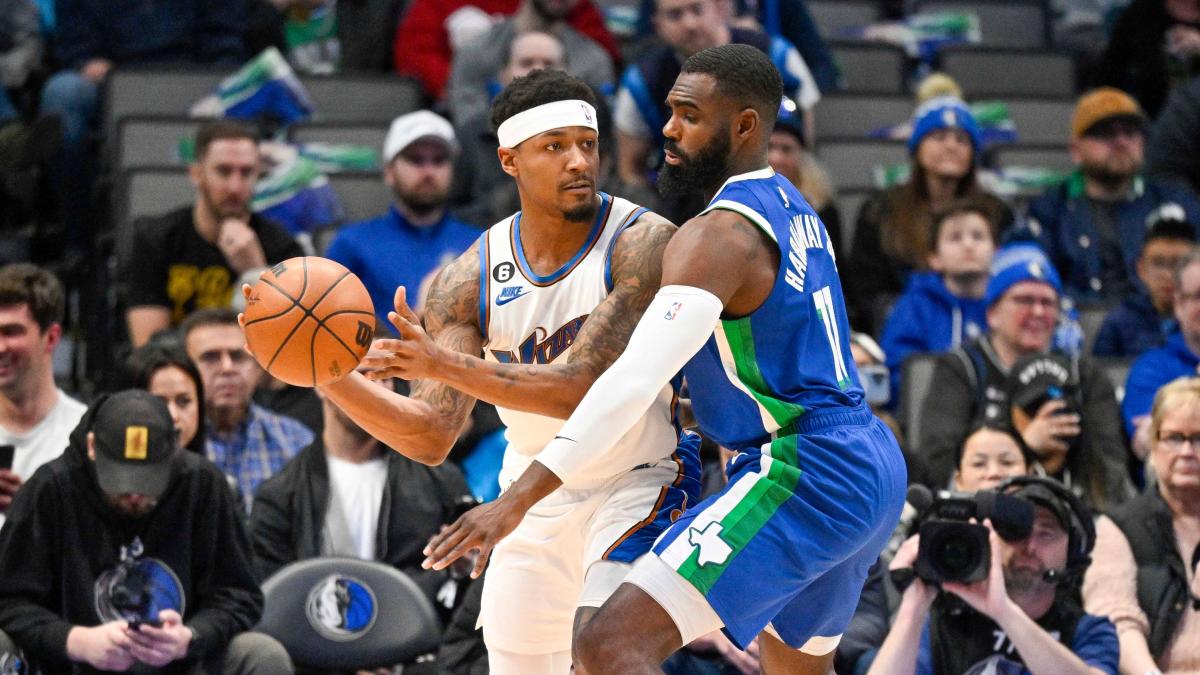 The Washington Wizards beat the Dallas Mavericks 127-126 on Tuesday night. Here are five takeaways from what went down…

Tuesday was the first game for the Wizards since they traded Rui Hachimura and announced Kristaps Porzingis would miss multiple games due to a sprained left ankle. That made their matchup with the Dallas Mavericks not exactly the start of a new era, but certainly a moment in time in which they could turn the page and start anew.

That new chapter opened with a victory, as Delon Wright stole Luka Doncic’s pass to Spencer Dinwiddie in the closing seconds to seal it. Kyle Kuzma (30 points) made the go-ahead free throw with five seconds on the clock and was the top scorer in the effort to offset Doncic’s 41 points.

That’s three straight wins for the Wizards, who began a five-game road trip in Dallas. They are now 21-26 on the year and 4-2 in games played without Porzingis.

Wizards president Tommy Sheppard gave an unexpected and very specific reason for why he traded Hachimura during Tuesday’s broadcast and that is it was in part to clear the way for Deni Avdija. According to Sheppard, Avdija will have a better chance to develop now that Hachimura is elsewhere, namely because there will be more minutes to go around. The two first-round picks also had some overlap with the position they play and their skillsets, if you consider the fact they are of similar size, are at their best with the ball in their hands and neither are above-average outside shooters.

So, in a way the onus is now on Avdija to capitalize. Trading a player like Hachimura whom the Wizards used the ninth overall pick on was not a decision they made lightly. Avdija has been given a major vote of confidence and a prime opportunity. He was solid in his first stab at it with 15 points, 10 rebounds and three steals. It will be interesting to see how he is used moving forward and how he performs in the new role.

With Porzingis out for at least a week and possibly several weeks, the Wizards have big shoes to fill. They began that process on Tuesday by promoting Corey Kispert to the starting lineup to start at the three alongside Kuzma at the four and Daniel Gafford at the five. Kispert was effective scoring the ball with 14 points and seven rebounds.

Gafford also put up solid numbers with nine points, seven rebounds and a block. But he also got into foul trouble, which is going to be something to watch as he takes on more responsibility. Gafford had two fouls by the midway point of the first quarter and later fouled out in only 19 minutes. It was his second straight game fouling out. In addition to Gafford having more responsibility, the Wizards also gave Anthony Gill a lot more playing time (19 minutes) than he’s used to.

Barton got some run

With Hachimura gone and Porzingis out, that evidently opened the door for Will Barton to get some rare rotation minutes. Barton hadn’t played in four straight games and was out of the regular rotation for over a month. But he checked in early in the first quarter of this one and, to his credit, took advantage of the opportunity.

Barton immediately made a corner three just eight seconds into his first shift and right after that made a nice pass to Deni Avdija. He then made another three, again from the corner. Barton showed enough to keep playing and finished the game with eight points on 3-for-5 shooting. It was the type of performance that could get him another chance in the next game.

Avdija and Barton were part of a strong overall bench effort in what was the first game for the second unit without Hachimura, who has been the best scorer in that group this season. The Wizards’ bench outscored that of the Mavericks, 39-to-26. Wright also had 10 points, six assists and three steals, continuing his upward trajectory on the offensive end.

If the Wizards still intend to make the playoffs, compensating for Hachimura’s loss is going to be crucial. They were 14-8 this season when he scored at least 10 points and went 3-13 during his month-long absence due to an ankle injury. It’s always possible the Wizards add something to the bench ahead of the Feb. 9 trade deadline, but right now it looks like others are just going to have to fill the void. Tuesday was a good start.