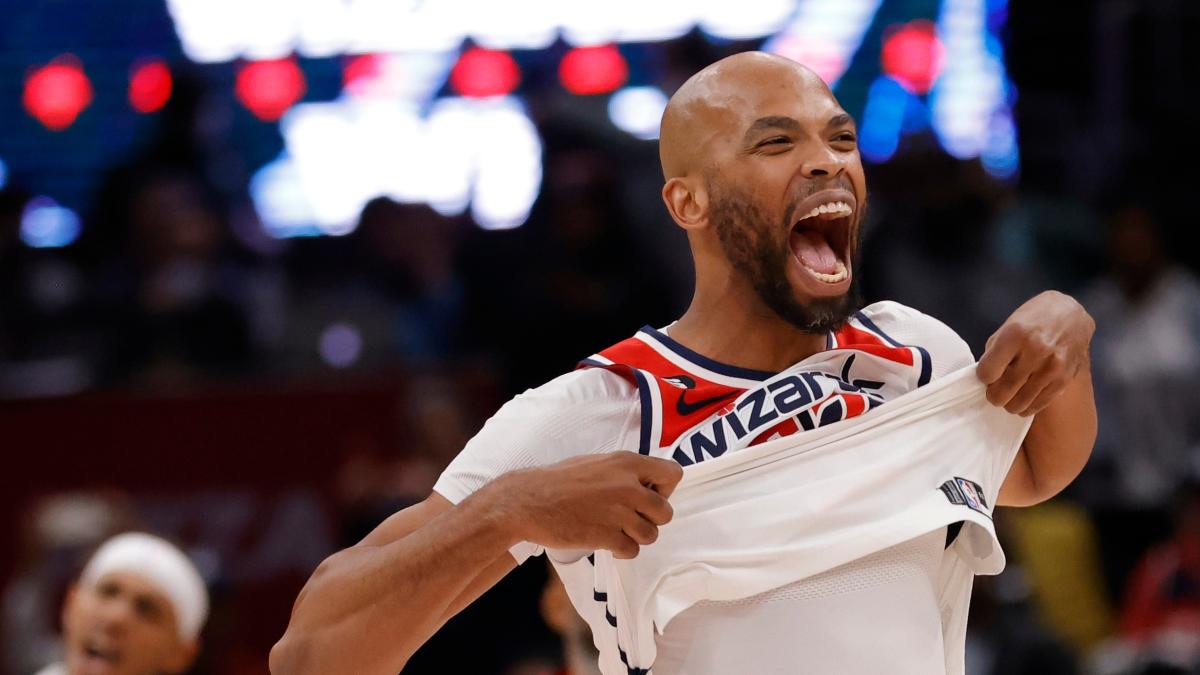 WASHINGTON — Taj Gibson hadn’t played in four games, but as the Wizards continued to get pushed around by a Heat team missing just about all of their best players, head coach Wes Unseld Jr. looked down his bench searching for someone to match Miami’s physicality. He called on Gibson, a 37-year-old veteran, who has been in the NBA long enough to have played a few games just like this one.

Miami was without Jimmy Butler, Bam Adebayo and Tyler Herro among others. There are inherent challenges to playing a team with a roster full of obscure players. They still have NBA talent, but their games are less known. The Wizards’ veterans did not have experience guarding Miami’s deep reserves and weren’t familiar with their tendencies.

Combined with the Heat’s usual brand of elite fitness and off-ball movement and you had a recipe for a first-half disaster. The Wizards gave up 69 points, as the Heat made nine threes and had four players reach double-figures.

Gibson helped change the tone for the Wizards in the 2nd half, as they locked down on defense to hold the Heat to 35 points across the third and fourth quarters, and then only two more points in overtime. It was enough for a win, albeit a bit of an ugly one.

Gibson played 16 minutes, doubling his previous season-high. He did not score, but grabbed eight rebounds, including three on the offensive glass. He blocked a shot, got a steal and used four fouls to remind the Heat they were not going to get to the rim without resistance.

It was enough to earn him the defensive player of the game belt, an honor the Wizards introduced this year in their postgame locker room after wins.

“I worked hard for this today,” Gibson said.

Gibson added he will put the belt in his kitchen, on display for his family to see. He said what meant the most about it was how it showed respect from the younger players on the team, the same guys he battles in practice and shares his knowledge with throughout games.

“My teammates kept pushing me and pushing me. I kept hearing them calling my name from the sideline,” he said.

Unseld Jr. said he went to Gibson because he wanted more aggression on the defensive end. According to Bradley Beal, the Wizards’ coach blasted his team at halftime, using some colorful language to get his point across.

He came out of the locker room with some changes in mind. One was giving Gibson some rare playing time, to see if he could light a spark.

“It paid off at the right time. Wes made a great adjustment and it helped us win the game,” Kuzma said.

The Wizards went extra big with their closing lineup. Kuzma essentially slid over to the three with Gibson at the four and Kristaps Porzingis at the five. They countered a smaller Heat lineup with size.

It worked. Gibson had to wait patiently for 11 days to appear in a game, but he got his chance on Friday and made the most of it.

“You’ve just gotta be ready to help your team. I was lucky Wes called my number,” he said.