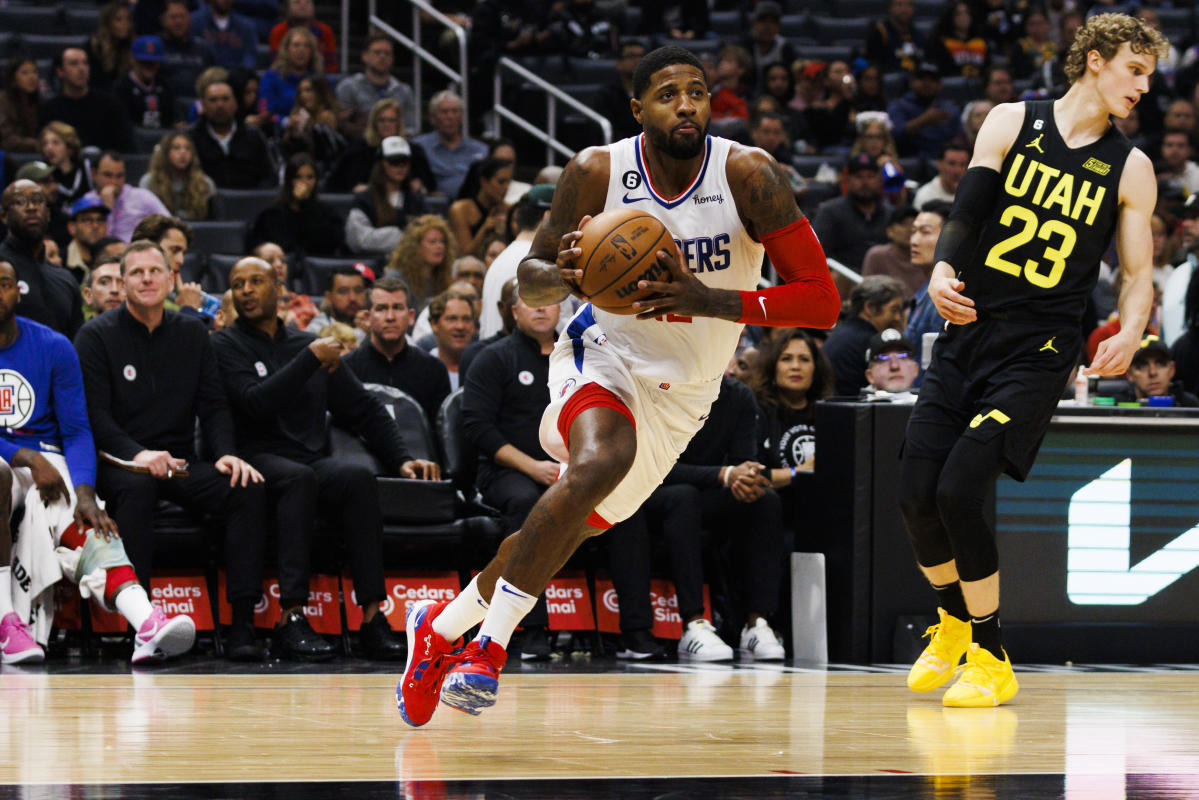 If you were wondering whether something was up with the Clippers, fret not. Allow head coach Tyronn Lue to soothe your jangled nerves.

Sure enough, his Clippers would soon win three straight, with nary a moonfall in sight.

The fact that Lue had to say that, though, called to mind that viral tweet about your T-shirt generating a lot of questions already answered by your T-shirt. If you have to remind everyone, five games into a season that began with championship chatter, that things aren’t really that bad … well, they couldn’t be all that good, either, could they?

The Clippers, more than any team in the NBA right now, exist in the eye of the beholder. They enter Wednesday’s meeting with the rival Lakers at 6-5, coming off a loss to the soaring Jazz and a comeback win over the Cavaliers. Glass half-empty: That slots them in seventh place in the West. Glass half-full: That’s just a game and a half out of second in a tightly packed conference.

Which one are they closer to: top seed or play-in? Well, your mileage may vary.

The glass-half-full view: There are worse fates than being above .500 when you’re sporting a Kawhi Leonard-shaped hole in the middle of your roster.

Expected to return to the fold after missing all of last season rehabilitating the ACL he tore during L.A.’s 2021 postseason run, the two-time Finals MVP has logged just 42 minutes thus far, and is once again sidelined for an indeterminate period due to persistent stiffness in his surgically repaired right knee. The Clippers have twice staked the fate of the organization on Leonard’s legs — first when they swung the blockbuster deal to land him and Paul George in the summer of 2019, and again when they signed him to a four-year, $176.2 million contract extension just two months after his ACL tear. The entire conceit of “Clippers as contender” rests on a fully operational Leonard and George serving as linchpins when it matters most; when you don’t have that, there’s not much to do besides tread water and wait to get whole.

Glass half-empty: Even without Leonard, just “treading water” falls well below the title-hunting expectations associated with the NBA’s highest payroll — and an estimated $145 million luxury tax bill. The win-loss record underplays how rocky a start it’s been for a team with the NBA’s eighth-worst point differential: The Clippers have been outscored by four points per 100 non-garbage-time possessions on the season, according to Cleaning the Glass. That’s a net rating you’d expect to produce a 31-win also-ran, not a championship hopeful.

Playing the long game with a player as vital as Leonard makes all the sense in the world, and no team in the NBA would be expected to simply replace a player capable of averaging an efficient 25-5-5 on punishing late-model-MJ pull-up daggers. But when you’ve built what some analysts (cough, cough) have called the league’s deepest roster, you’re supposed to be able to find ways to keep things humming even when the best-laid plan goes awry. On that score, the Clips have struggled mightily … thanks largely to some mighty struggles to score.

The only team producing fewer points per possession than the Clippers is the 2-8 Lakers, whose woeful shotmaking has commanded much heavier scrutiny than that of their co-tenants. L.A. has needed superstar performances from George just to stay afloat recently. And, to his credit, he has provided them, earning Western Conference Player of the Week honors while averaging 31 points on scorching shooting to go with 5.6 rebounds, 5.2 assists and two steals over his last five games.

Even with George balling out, though, the Clips still rank at or near the bottom of the league in a ton of offensive categories, including 3-point makes and accuracy, assists per game and points created via assist, and frequency of shot attempts generated at the rim or from the short corners. Their process for generating offense has often looked like drudgery; from the sound of things, it’s felt that way, too.

“We got to find a way to have fun, have some joy,” newcomer John Wall recently told Law Murray of The Athletic. “Like I told the guys in the locker room, I said, ‘Enjoy it. I had the game taken away from me for two years.’ We just don’t be having no joy, not having no fun. I think we all feel like it’s a lot of pressure on us.”

You can almost feel that pressure bleeding through the screen whenever a Clipper decides it’s time to put on a cape and play hero ball. As much as Lue has said he wants his players to “get into the paint and make the right play” when they’re not open, the Clips seem to have a hell of a time breaking down coverages and pressuring the rim, ranking 24th in the league in drives per game and 28th in paint touches.

Some of that owes to a lack of ball and body movement on a team that’s second-to-last in both passes thrown and total distance covered offensively. Only three teams spend more time than the Clippers attacking in isolation, according to Second Spectrum tracking: the Mavericks, Raptors and 76ers, who employ some of the league’s highest-volume and highest-efficiency iso attackers (Luka Doncic, Pascal Siakam, James Harden and Joel Embiid, respectively). All that quantity hasn’t always amounted to much quality, though: L.A. ranks a middling 17th in points produced per chance in one-on-one play, struggling to consistently create the advantages that lead to easier shots.

See also  Should NBA retire No. 6 of Bill Russell across entire league?

There just aren’t that many Clippers who regularly beat their defenders off the dribble, force rotations and bend the defense to create openings for other teammates. Even when someone gets two feet in the paint before kicking out to the perimeter, the pass often sails to a teammate who still has a defender in his mug — a recipe for east-west pondering rather than north-south puncturing, which typically ends in a contested jumper:

More minutes for Terance Mann, who averaged just under five drives per game last season and routinely takes the bulk of his shots at the rim, might help provide a dose of dynamism and catch-and-go aggression. To wit: The fourth-year wing scored 16 points on nine shots with five assists in a season-high 30 minutes against Cleveland on Monday; in their best offensive performance of the season, the Clips outscored the Cavs by 20 points with Mann on the floor.

Then again, Lue might bristle a bit at leaning harder on a player who has turned the ball over much more frequently this season … which, frankly, has been an across-the-board concern for the Clips. Those dribble-dribble-dribble-stepback possessions can be brutal, but they’re better than the ones where you lose the ball before even getting a shot up — and, for such a veteran-laden team, that seems to happen an awful lot of the time.

L.A.’s tied for 25th in the NBA in turnover rate, coughing it up on 16% of their offensive possessions. Turnovers of all stripes can be damaging to an offense’s flow, but the ones where you give the ball directly to the other team really hurt. The Clippers are committing 8.24 live-ball turnovers per 100 possessions, according to PBP Stats, ninth-most in the NBA — with plenty of them turning into runout buckets for the opposition.

These Clippers really can’t afford to be giving away possessions, because they don’t create many for themselves. They don’t take the ball away from the other team much, ranking 23rd in opponent turnover rate. With the exception of Ivica Zubac’s minutes, they’re not extending their own possessions or capitalizing on the ones they do keep alive, sitting dead last in both offensive rebound rate and second-chance points per game. Despite Wall’s occasional forays into transition play, they don’t really push tempo, taking longer to shoot on their average trip than all but five other teams, according to Inpredictable.

Add all that to how often L.A. hands opponents the ball, and you’ve got a recipe for the league’s fewest field-goal attempts per 100 possessions. Combine that with one of the NBA’s lowest free-throw rates, and you’ve got an offense that just isn’t getting enough bites at the apple — effectively starting every game down a handful of points, just by virtue of losing the possession battle.

You can still win that way with cohesion, brilliant shooting and a top-notch defense. But while the Clips have fielded the NBA’s No. 4 defense this season, holding opponents to just 109 points-per-100, the other two elements just haven’t been there yet.

With Leonard out for all but two games, Wall yet to play 30 minutes or in both ends of a back-to-back as the Clippers slowly integrate him after his extended absence in Houston, and other players in and out of the mix for a variety of issues, Lue has had to use five different starting lineups in 11 games. L.A.’s most heavily played lineup — George, Zubac, Marcus Morris, Norman Powell and Reggie Jackson — has logged just 52 minutes together (and gotten blitzed by 32 points in them). For his part, George thinks all the roster shuffling has played a role in the choppy offensive flow and subpar shooting.

“It’s a work in progress,” George told reporters after Sunday’s loss to Utah. “… The uncertainty of the lineups just created a little inconsistency within our offense. But it’s early in the season. I think that’s the good part about it. And I believe — I’m very optimistic that this team will find our stride and start playing our best basketball.”

Performances like Monday’s win over Cleveland — which saw L.A. hit a season-high 17 3-pointers while committing a season-low nine turnovers against the league’s second-stingiest defense — support George’s calls for optimism. It’s a solid bet that a roster featuring nine players who have shot better than 36% from deep in their careers will eventually make more than 30 percent of its corner threes. When that regression to the mean comes, Kawhi or no Kawhi, L.A.’s offense will start to run more smoothly. Combine that with what has mostly been a snare-drum-tight defense, and the Clippers may well resemble the versatile and dangerous league-wrecker that so many anticipated they’d be heading into the season.

But then: the glass-half-empty take. While the shooting was better, the offense never really came around last season, either, and it’s anyone’s guess how confident you can be that Kawhi will solve that problem. The Clippers’ failure to make more hay against one of the West’s softest schedules could come back to bite them when the slate turns tougher — especially if they can only rely so much on the ongoing super-heroics from George, who’s now 32 and has missed 93 games over the last three seasons.

A team that can surround two of the world’s best two-way wings with capable complements against virtually any opponent sounds like a champion. A team with only one star-caliber creator you can rely on to generate a good look when it counts sounds like the fodder champions feast on. Eleven games into the season where it’s all supposed to come together, we’re not yet sure which one the Clippers are. No, the sky isn’t falling. You’d be forgiven for feeling like it looks pretty cloudy up there, though.