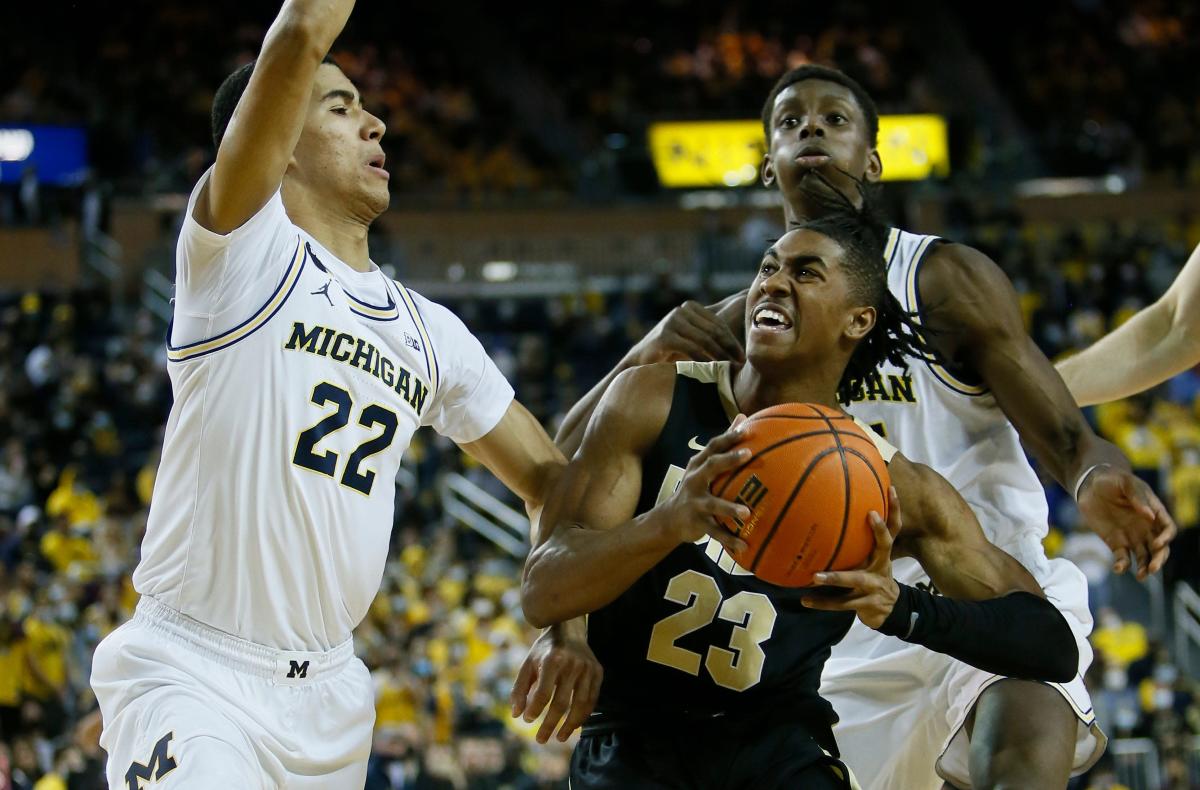 The 2022 NBA draft is just over 48 hours away and the rumors continue to swirl.

From teams looking to trade up, to those reported to be heavily favoring one prospect over another, it can be tough to keep it all straight and sort out the smokescreens from the truth.

But what we do know is after Thursday night, there will be a much clearer picture of the trajectory forward for general manager Troy Weaver and the Detroit Pistons

A number of NBA draft analysts released their latest mocks leading up to Thursday. Here’s who they have the Pistons taking, what they said and where they see former Michigan basketball and Michigan State standouts going:

For weeks (and maybe months) the word has been the Pistons hope Purdue standout Jaden Ivey is still available at No. 5.

In ESPN’s latest mock, Jonathan Givony has Ivey going at No. 4 to the Kings, but instead of going with fellow Big Ten star Keegan Murray — who makes sense for a number of reasons — he has Detroit grabbing Arizona standout Bennedict Mathurin.

Givony writes that the Pistons like the idea of pairing the 2022 Pac-12 Player of the Year with Cade Cunningham because of his ability to work in open space and knock down shots coming off screens. In addition, Murray is 21 years old (and will be 22 this fall) while Mathurin, 19, has more time to develop.

“Mathurin drew strong reviews on the private workout trail, excelling in competitive action, individual drills and interview sessions everywhere he visited and boosting his stock into the mid-lottery in the process,” Givony writes. “Detroit’s front office and coaching staff is said to be especially interested in the All-American and Pac-12 Player of the Year’s intriguing combination of current productivity and future upside at just 19 years old.”

Givony sees Michigan’s Caleb Houstan going No. 38 overall to San Antonio Spurs in a pick the Spurs got from the Los Angeles Lakers.

Houstan averaged 10.1 points, 4.0 rebounds and 1.4 assists in his lone season with the Wolverines.

Christie, a former five-star recruit who was pegged as a potential lottery pick before last season, averaged 9.3 points, 3.5 rebounds and 1.5 assists during his Big Ten All-Freshman season in 2021-22.

If Pistons fans want Ivey, they won’t be happy with this mock draft either, which also has the Purdue star going just one pick before the Pistons get to the podium.

Instead, Sam Vecenie sees Detroit going with what many believe is the safest option at No. 5, Iowa standout Keegan Murray. Of course, much of this depends on what Detroit does with Jerami Grant, who is in the final season of his three-year, $60-million contract and will be looking to get paid after next year.

Murray, a 6-foot-8 wing, would be in line to be that replacement.

“Murray has quite a few fans in the Detroit front office,” Vecenie writes. “He would fit exceedingly well with Cade Cunningham and Saddiq Bey offensively as long-term building blocks.

“I think this one would come down to Murray or Arizona wing Bennedict Mathurin. Mathurin had a very strong workout in Detroit and is absolutely in play in this spot.”

See also  Who hit the first three-pointer in NBA history?

Unlike Givony, who doesn’t see Christie going until the back-half of the second round, Vecenie doesn’t see teams waiting on the sharp-shooting wing who has an NBA scoring skillset once he puts on more weight.

Vecenie pegs Christie as the first pick of the second round, going 31st overall to the Indiana Pacers.

Houstan, the sharpshooter from Michigan, doesn’t have to wait much longer to hear his name called in this scenario either, with Vecenie projecting the Oklahoma City Thunder to grab the 6-8 wing at pick No. 34 — the fourth pick of the second round.

If you thought Mathurin was a curveball, Matt Norlander of CBS Sports’ mock draft will need a whole new word for it. Here’s his top four: Paolo Banchero, Jabari Smith, Shaedon Sharpe, Mathurin.

That leaves not only Ivey, but the 7-foot unicorn Chet Holmgren available for the Pistons at No. 5. In Norlander’s mock, he has the Pistons going with the Gonzaga big man.

Norlander’s hesitation — and rationale for Holmgren dropping from what is widely expected a No. 1 or 2 position to No. 5 — is the same as everybody’s concern with Holmgren: His frame.

Holmgren weighs just 195 pounds. He was extremely effective at Gonzaga, putting up 14.1 points and 9.9 rebounds per game while shooting 39% from three, but he’ll see stronger, more athletic big men in the NBA.

“I think it’s more than reasonable to project at least one of the big three to not be a top-five player in this class by the time we look up in 2030 and take stock of all that’s happened,” Norlander writes. “Since Holmgren’s still dogged by questions about his frame and shelf life as a durable presence, I’ll pick him to be the worst of the three.

“I don’t question his work ethic or love for the game at all. I can’t wait to see him in the NBA, but I think he winds up as a good, but a bit inconsistent, modern stretch-center.”

In the end, one of the four mock drafts does have the Pistons selecting Ivey.

It’s easy to see why the Pistons want Ivey in the modern NBA. He’s fast, athletic, can get downhill, attack in transition, handle the ball and would likely make a dynamic backcourt running mate with Cunningham.

SI’s Jeremy Woo said this move has the potential to give Detroit one of the top backcourts in the league.

“Ivey should immediately be a force in transition and attacking the paint with NBA spacing, but he’s still refining his game as a playmaker and learning to defend with intent,” Woo writes. “His strengths should take pressure off Cunningham to create every shot, and conversely, he’ll be able to cover for Ivey’s shortcomings in the half court. It’s a strong match in theory.”

Much like the earlier mocks, Woo sees the two wings from Michigan and Michigan State going in the second round. Woo has Houstan going to the Magic — he would be the third Wolvlerine in Orlando, pairing with brothers Mo and Franz Wagner — and joining whomever the organization takes at No. 1 overall.

He then has Christie going to the Sacramento Kings, and if his earlier projection in the mock plays out, he would join fellow Big Ten standout Keegan Murray, who Woo has the Kings taking No. 4 overall.