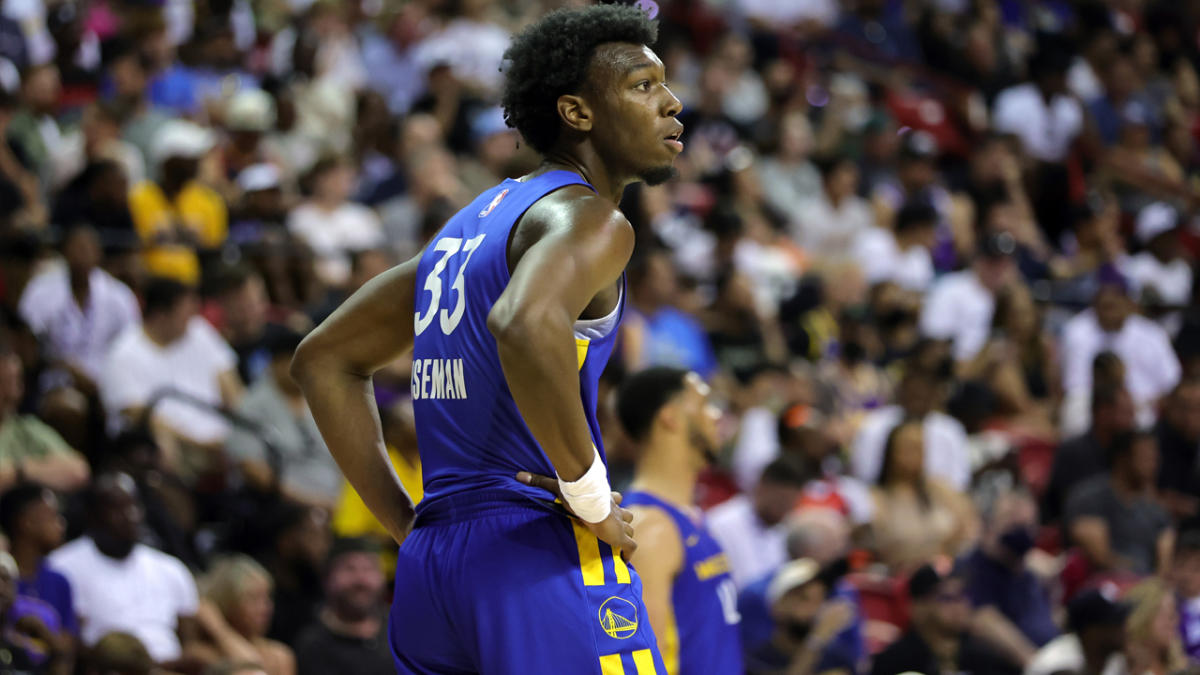 The Warriors hoped James Wiseman would be ready to suit up for games in November. Didn’t happen. In December, he was back on the surgeon’s table for the second time in eight months. Arthroscopic procedure.

Not until March – 11 months after undergoing surgery to repair a torn meniscus in his right knee – was Wiseman cleared. With the regular season nearing an end, the Warriors decided it best for the 7-foot-1 center to focus on getting healthy in the G League.

Warriors last season: 82 games, plus 22 in the postseason.

Wiseman last season: 0 games, and lot of observation from the bench.

Insofar as the Warriors consider Wiseman one of the keys to their next phase, they were cautious, while Wiseman dealt with frustration and exasperation.

Finally, in July, with the Warriors using the Las Vegas Summer League as a testing ground, Wiseman was cleared to play. His joy was visible. He was rusty but there were flashes of his burgeoning talent.

After 14 months in his personal purgatory, Wiseman’s future looks like freedom.

The Warriors go into training camp this week exuding optimism, a belief that Wiseman is capable of playing meaningful minutes and, moreover, will be productive – particularly on defense.

That’s because the big man has been showing well in workouts with his teammates. His running and jumping are smooth, his general movements becoming more decisive.

Every sign, spoken and unspoken, indicates Wiseman will be coming off the bench in relief of starting center Kevon Looney and providing a dimension the Warriors currently lack: Someone with a 9-foot-6 standing reach and enough athleticism to make good use of it.

Wiseman has added about 15 pounds to his frame, which as a rookie had the appearance of a well-fed, broad-shouldered skeleton. Still, do not expect to see him planted on the block, trying to back Nikola Jokić into the baseline. That’s not Wiseman’s game, which is not to suggest he won’t find buckets in the paint. He’s better equipped, physically, to hold his own.

The message from the coaching staff to Wiseman is to be useful on offense but concentrate mostly on making an impact on defense.

On offense: Run the floor in transition, set effective screens for the team’s shooters, be a consistent lob threat and occasionally showcase his soft shooting touch, whether through pick-and-pop action or a 3-point shot.

On defense: Rebound, protect the rim, rebound, be a willing and competent practitioner within the team’s defensive switching scheme. And, uh, never stop pounding the glass.

There will be times when Wiseman looks lost, but the Warriors have seen enough to believe that won’t be a habit. Jonathan Kuminga played 70 games as a rookie last season – yes JK has more NBA experience than Wiseman – and there were times he looked lost. It’s part of the process.

The Warriors hope Wiseman can give them 16 to 20 minutes per game, with the potential for more. His individual stats will matter a bit, but his impact will be best measured by how the team plays when he’s on the court.

Keep in mind that Wiseman is 40 months removed from graduating high school and has since played a total of 42 games. He might someday be gold, but he’ll have to shed a lot of green.