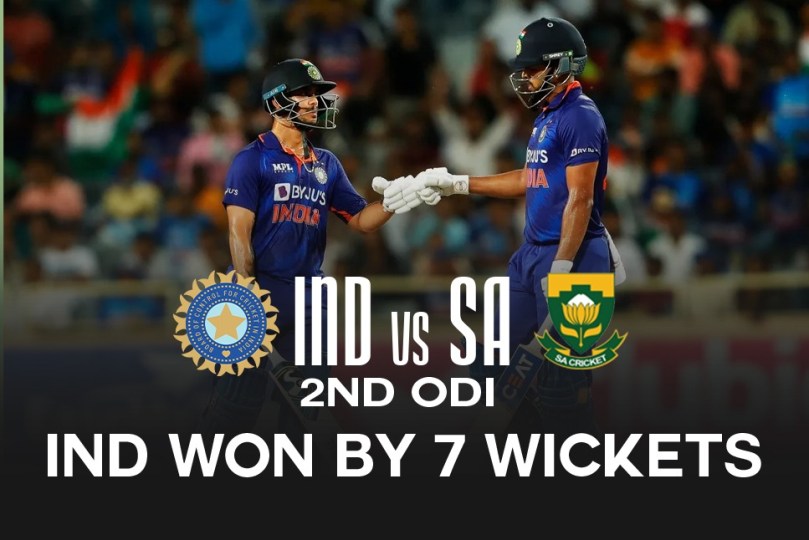 IND vs SA Highlights – India win by 7 wickets: Shreyas Iyer and Ishan Kishan have restored parity in the three-match ODI…

Chasing a target of 279 was tricky on a slow pitch of Ranchi. Shikhar Dhawan and Shubman Gill once again did not have a good outing. Dhawan continued his frustrating run against left-arm seamers, being dismissed for 13. While Gill and Ishan Kishan looked good together, But Kagiso Rabada removed Gill for 28. Then on, Shreyas Iyer and Ishan Kishan anchored. They were slow to start with against Proteas seamers. But as they found their groove, the two took on Proteas spinners. Keshav Maharaj went at 6.40 while Aiden Markram conceded at 7.30. Bjorn Fortuin was decent. However, he too conceded close to 6.

Iyer and Kishan added 162 runs for the 3rd wicket off just 155 balls. While the spinners were expensive in Ranchi, Ishan Kishan took a particular liking to Anrich Nortje’s speed. Ishan dazzled his home crowd with 7 sixes and 4 fours en route 93 off 84. All the talk about his not being effective against express pace vanished when Ishan pulled a 148KPH delivery of Nortje for a 6.

A magnificent run-chase by #TeamIndia against South Africa to register a victory by 7️⃣ wickets in Ranchi! 🙌🏻

“It’s a good feeling. It’s 1-1, so very excited to play the decider at Delhi. I am really happy with the way we contributed to the team. It is my home ground, there were too many people watching. When I was fielding they were asking me to get a hundred today. Unfortunately, I missed it. No worries, I’m just happy that my team won the game today and maybe in the next game I will give my best and make my team win again,” Ishan Kishan said after the match. On the other end, Shreyas Iyer looked a man on a mission after being snubbed from the T20 World Cup 15-member squad. After missing his century despite good start, he was determined to get to the triple-figure mark on Sunday. With 15 fours, he played calculated shots and never looked uncomfortable against short balls with the wicket keeping the ball low on a black soil surface.

Iyer remained unbeaten on 113 off 111 balls. After 161-run stand with Ishan, he added another 73-run stand with Sanju Samson to take India to the target with 25 balls to spare. Samson remained not out on 30 off 36 balls.

“When I went into bat, felt that the wicket was playing good. The talk between me and Ishan was to play the ball on merit, build a partnership. Tomorrow is going to be a travel day, and then the match. Let’s see what is in store for me. I’m not someone who changes a lot to the bowler or instance. It’s just instinctive, and believing in myself,” Player of the Match Shreyas Iyer said at the post-match presentation.

Don’t miss the LIVE coverage of the #INDvSA match on @StarSportsIndia. pic.twitter.com/vsne3WHFQq Earlier, Some excellent bowling from Mohammed Siraj (3/30) at the death helped India restrict South Africa to 278/7. South Africa were heading to 300+ score with Reeza Hendricks (74) and Aiden Markram (79) adding a 129-run stand. India fought back in the last 10 overs to keep the score to a chaseable one in Ranchi.

The ace pacer had the last laugh though as he dismissed Quinton de Kock in the third over for a paltry score of five runs. The batter dragged an outside off delivery onto the stumps.

Janneman Malan then played a few eye-pleasing shots to take the South African inning forward. The batter looked set to play a long innings but was sent back by debutant Shahbaz Ahmed giving him his maiden ODI wicket. South Africa finished at 40-2 after the end of the 10 overs.

Aiden Markram then joined Reeza Hendricks at the crease, the duo then steered the South Africa innings to take them past the 150-mark. Hendricks reached his fourth ODI fifty in the 26th over with a punch to the sweeper cover. Markram followed in the footsteps of his fellow teammate to bring up his fifty in the 28th over.

Hendricks was looking to up the ante but was caught at the boundary after failing to connect the ball sweetly. Shahbaz Ahmed gobbled up the catch at the deep square leg boundary to send back the batter for a score of 76 runs of 79 balls.

Heinrich Klaasen was the next batter who occupied the crease with Markram and shared a quick-fire partnership of 46 runs from 40 balls. Klassen was dismissed by Kuldeep Yadav after the batter tried to clear the boundary at long-on but failed to do so. India struck again in the next over as Washington Sundar dismissed the well-set Markram for 79 runs.

David Miller and Wayne Parnell were at the crease for the Proteas at the end of 40 overs with the team’s total at 221-5, looking to capitalize on the platform laid by the previous batters. Both the batters looked to make a late flourish but the Indian bowlers bowled to their plans, keeping the visitors in check. The scoreboard pressure kept building as the Protea batters failed to find the boundaries. In the end, they could only post 277/7. Mohammed Siraj was the pick of the bowlers as he took three wickets for 38 runs.