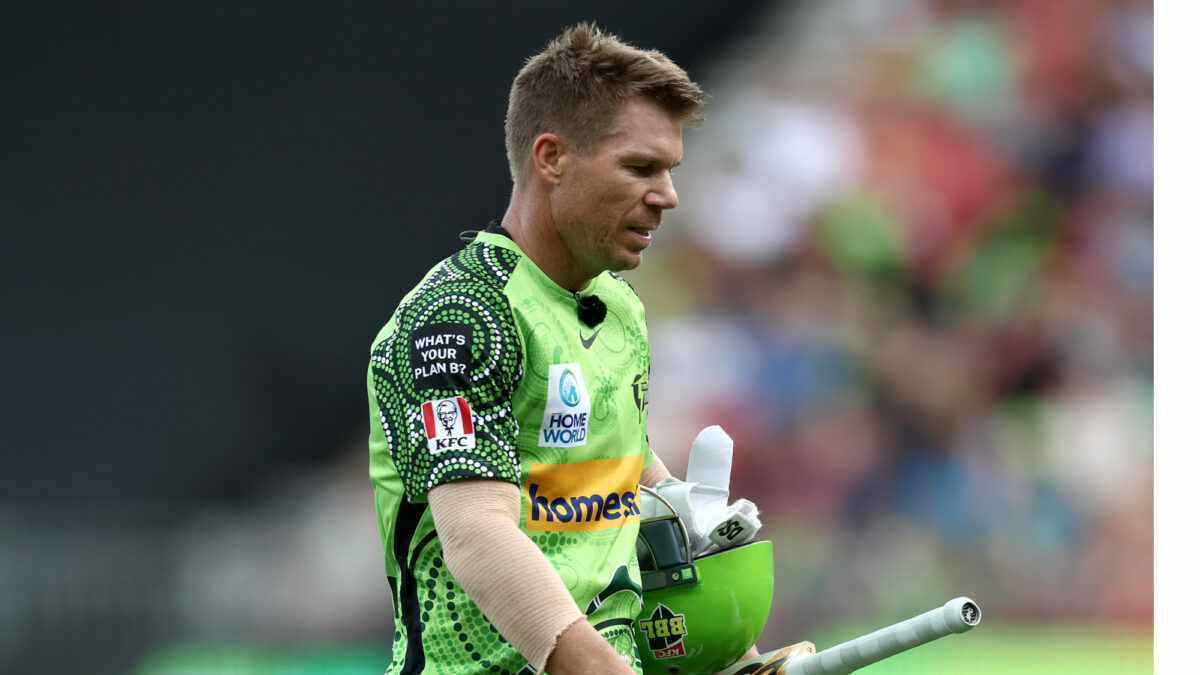 The Sydney Thunder have staggered to a three-wicket win against the lowly Melbourne Stars, booking their spot in the BBL finals.

Chasing just 120 to win at the MCG, the Thunder slumped to 5-60 and were in danger of blowing a golden opportunity to seal a place in the top-five.

The Thunder were staring down the barrel after being 7-88 with star opener David Warner (two) failing for the fifth time in as many innings but Stars captain Adam Zampa dropped a sitter to give Daniel Sams a life.

Sams smashed an important, quick-fire 28 before Zampa (3-26) bowled him in the next over to keep the Stars in the match.

But the damage from Zampa’s dropped catch had been done with captain Chris Green and Nathan McAndrew steering the Thunder home with seven balls remaining, securing fourth spot and a home final.

The win knocked Hobart out of fifth spot after the Hurricanes had earlier on Wednesday beaten Brisbane in a thrilling encounter at Blundstone Arena.

The Thunder will host the Heat at Sydney Showgrounds on Friday night in a knockout final.

“Honestly, the batting we need to rectify it,” Green told the Seven Network. “It wasn’t good enough unfortunately.

“I think to creep in and have a crack now at finals is exciting for us. We have taken them (Thunder fans) on our rollercoaster journey this season. But (the Heat) are a side we beat twice this season already.

“We know they are playing good cricket at the back end and we know we will have to play good cricket to beat them.”

During the Stars’ innings of 7-119, Pakistan spinner Usman Qadir dominated with figures of 3-24. Qadir claimed the key scalps of Tom Rogers (35), Australia white-ball player Marcus Stoinis and big-hitting Beau Webster to put the Thunder in a commanding position.

Former Australia player Hilton Cartwright top-scored for the Stars with a patient 36, but fell to Thunder captain Chris Green (2-19). Veteran bowling allrounder Nathan Coulter-Nile’s miserable form with the bat continued, falling for his fourth duck in a row.

The Stars completed a horror campaign on the bottom of the ladder after winning just three of 14 matches.

The Hobart Hurricanes have pulled off a remarkable two-run victory over the Brisbane Heat, only to fall short of making the Big Bash League finals.

The Heat were well on track to run down the Hurricanes’ modest total of 9-120, needing 16 runs from the final three overs in Launceston with five wickets in hand.

But the chase imploded, with top-scorer Jimmy Peirson (39 from 37) falling to Nathan Ellis in an 18th over that went for four runs.

Hurricanes quick Joel Paris then got rid of Michael Neser in the next over and conceded just two.

Brisbane required 10 runs for victory off the final over, bowled by part-timer Tim David, but managed just seven despite a heaving maximum from Tim Bazley off the third-last ball.

Bazley needed a four off the final delivery to win the match but could only squeeze a single, leaving the Heat at 8-118.

The win lifted the Hurricanes to fifth on the ladder, but they were pushed down to sixth and out of the finals when the Sydney Thunder toppled the Melbourne Stars at the MCG on Wednesday night. “What a game. We obviously took a risk bowling myself and Riley (Meredith) out early. We knew full well that Tim (David) was going to have to bowl the 20th (over),” Ellis, who took 2-26, told FoxCricket directly after the match.

“Fortunately it just came off. We got a couple of wickets at the right time. For Tim as a part-time off-spinner to do that. It was unbelievable. It was just one of those days where any time we came up with a plan it came off.”

The Heat missed a golden chance to secure third spot and hosting rights for ‘The Knockout’ final on Sunday. They finished in fifth spot and will travel to Sydney for ‘The Eliminator’  against the Thunder on Friday night.

The Heat fell to 4-30 in the sixth over of the chase, before a 73-run partnership between Peirson and Sam Hain (26 from 34) ironed out a big chunk of the total.

The Hurricanes earlier wobbled to 9-120 after losing the toss and being sent in to bat.

Mac Wright was their sole lone spark with the bat on a tricky pitch, scoring a run-a-ball 56 in his first match of the summer.

Marnus Labuschagne pulled off two sharp outfield catches – a low diving effort to get rid of Ben McDermott (two from seven balls) and an overhead grab to remove danger man David (four from six). Brisbane’s rookie left-arm quick Spencer Johnson (2-20 from four overs) was impressive early and at the death.

Since 2018, the Indian cricket board (BCCI) has been staging a three-team Women’s T20 Challenge alongside the hugely popular IPL for the men and faced demands to start a women’s tournament.

On Wednesday, the BCCI announced the sale of five franchises for the Women’s Premier League (WPL), which will be played in March, for amounts surpassing those raised at the launch of the men’s competition 15 years ago.

The owners of IPL’s Mumbai, Delhi and Bangalore franchises are among the five entities who purchased teams in the WPL for a combined total of more than $800 million.

The Adani group made the highest bid of approximately $223m to buy the Ahmedabad franchise, while Capri Global Holdings agreed to pay $131m for Lucknow.

“Today is a historic day in cricket as the bidding for teams of inaugural WPL broke the records of the inaugural men’s IPL in 2008,” tweeted BCCI secretary Jay Shah.

“This marks the beginning of a revolution in women’s cricket and paves the way for a transformative journey ahead not only for our women cricketers but for the entire sports fraternity.”

Allrounder Sthalekar – who represented Australia between 2001 and 2013, winning four world titles along the way – took to social media to express her delight at the development.

“It sure is HISTORIC,” she wrote. “The women’s game breaking records already & they haven’t even played a game yet. This is so exciting. Congratulations to @BCCI & all involved.”

The BCCI has already sold the tournament’s media rights for the next five years to Viacom 18 for $165m which translates into per-match-value of $1.2m.

Tahlia McGrath has hailed her award as the ICC women’s Twenty20 International cricketer of the year as a “pretty special” reward after her spectacular 2022 breakthrough.

McGrath scored 435 runs in 16 matches at an average of 62.14 and took 13 wickets over the year, earning her the prestigious accolade ahead of India’s star opener Smriti Mandhana, Pakistan allrounder Nida Dar and New Zealand captain Sophie Devine.

The award marks a spectacular rise from the 27-year-old from Adelaide, who only made her T20I debut in October 2021 but has since constantly shone in the shortest format of the game.

She began the year with a thumping unbeaten 91 off just 49 balls and three wickets against England and ended it with more exceptional performances on the tour to India.

“It’s an absolute honour to win this,” said McGrath, reflecting that her highlight had been winning the Commonwealth Games gold in Birmingham during which she scored 128 runs at an average of 42.66. 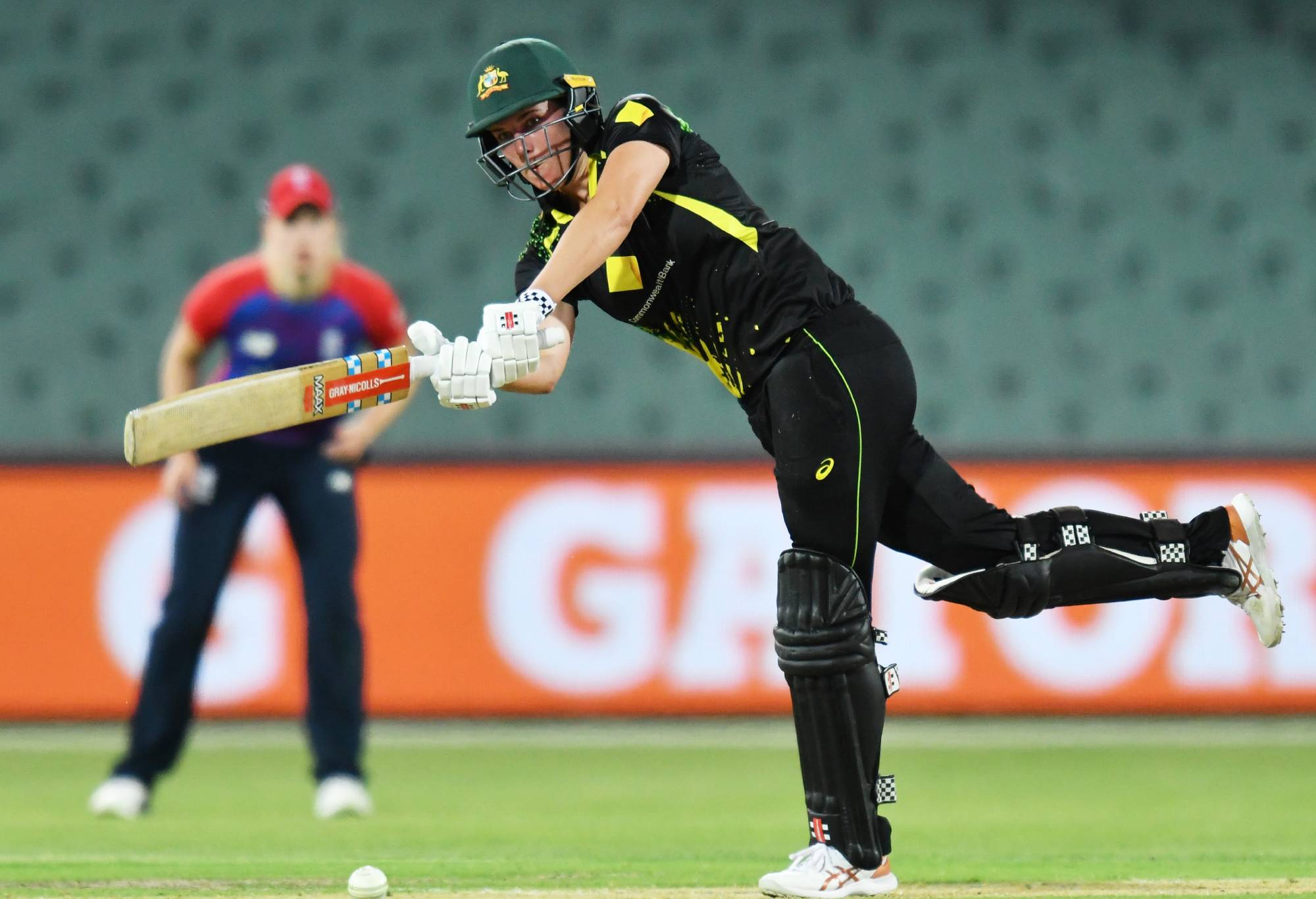 “I’m pretty fortunate to play in the team that I do and lucky to play with some of the best players in the world. This one’s pretty special.”

McGrath’s teammate Darcie Brown missed out on the ICC women’s emerging player of the year award after being on the shortlist, with the accolade going to another pace prospect, India’s Renuka Singh.

The 2.08m paceman Jansen has made his biggest impact so far in Test cricket, but will next set his sights on troubling England in the ODI series that begins in Johannesburg on Friday.

India’s white-ball sensation Suryakumar Yadav took the men’s T20I player of the year as the only batter to score more than 1000 runs in the format in 2022, with two centuries and nine half-centuries.

On Thursday, the final major awards will be announced, with Australia’s Beth Mooney on the shortlist for women’s cricketer of the year alongside England’s Nat Sciver, Indian Smriti Mandhana and New Zealander Amelia Kerr.

Jofra Archer is ready to do the “hard yards” for the twin challenges of the Ashes and World Cup this year, but England’s pace ace is aware of the expectation he faces ahead of his international return.

Archer was England’s spearhead in the 2019 50-over World Cup triumph and then took 22 wickets at a dizzying 20.27 in that summer’s Ashes, but his career has since been railroaded by elbow and back injuries.

Having collected eight wickets in five matches on his competitive comeback in the SA20 this month, Archer is on the verge of a first England appearance since March 2021 in an ODI series against South Africa this week.

While a red-ball outing remains some way off for Archer, who says he is now at “about 80 per cent” fitness, he is happy to do whatever it takes to feature for England against Australia this summer.

“It is an exciting prospect to think about playing with the guys again, especially with the brand of cricket they are playing, which is very exciting,” Archer said.

“I need to spend the next two, three, four months fine-tuning the body and making myself a bit more resilient. Let me sort that out first then I can look forward to holding the red ball in my hand again.

“Overs are overs and you train and bowl until you feel good. Obviously, I might have to do some extra bowling during the weeks when I’m in India (for the IPL, likely in April and May).

“But that is absolutely fine because I want to play in the Ashes, so I’m going to have to do all the hard yards to tick those boxes.”

His breakout displays in 2019 mean Archer is held in the utmost regard and the 27-year-old accepted the flip side is there will be a lot of curiosity regarding how he fares in the weeks and months ahead.

Red and white-ball captains Ben Stokes and Jos Buttler have attempted to put Archer’s mind at ease, with the fast bowler seemingly set for England’s first ODI of the year in Bloemfontein on Friday which marks the start of the countdown towards the defence of their World Cup title in India in the autumn.

“Ben said there is no expectation, so did Jos,” Archer said. “It’s nice to hear it, but people will have expectations anyway. Hopefully I can do a half decent job to help the team.

“If I don’t do well when I play, a lot of people will be watching. I will be judged again and no one will remember the good stuff I’ve done in SA20. You are only as good as your last game.

“This is our first ODI of the year so I’m very glad to be playing from the start and, when we do get to India, hopefully I’ll be there, and everything will seem worth it.”