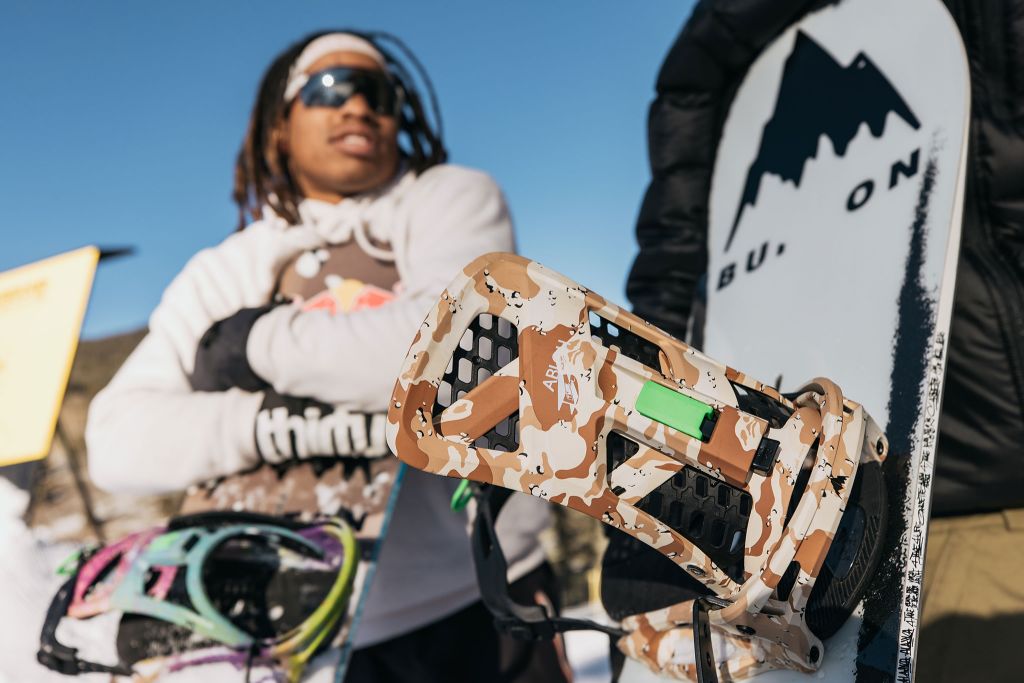 Throughout his prolific career in fashion, art and architecture, Virgil Abloh made it known that it was youth culture that drove his creative mind. It was the designer’s ability to distill and combine the interests and aspirations of young people alongside his own childhood memories and fascinations into a more democratic view of fashion that lured giants like Nike and Louis Vuitton to work with him.

With Burton, it was just as personal. An avid snowboarder who had spent his Midwestern childhood skateboarding and snowboarding at a time when both were subcultures on the precipice of pop influence, Abloh first partnered with the Vermont-based snowboard brand back in 2017 for a women’s collection, in partnership with fellow snowboarder an then-Vogue editor Selby Drummond.

Snowboarding must have been on Abloh’s mind during the last year of his life, as the designer worked on not one but two projects surrounding the sport. First, there was a custom Louis Vuitton snowboard case for Shaun White in honor of the athlete’s last Olympic Games at Beijing in February and for the debut of his own brand of snowboards, called Whitespace.

And now, there is a long-awaited second collaboration with Burton, which will debut on March 22 with a series of boots, bindings and boards that are all distinctively Ablohnian. Burton also unveiled today a series of 10 exclusive snowboards that are up for digital auction off within the next 48 hours, with proceeds from the auction going to Abloh’s Post-Modern Scholarship Fund, which has raised more than $1 million since the designer founded it in July 2020 with the aim to the next generation of Black fashion industry leaders. The starting bids of the “Board 0” boards (which are directional camber bend styles) began at $1,977, in honor of the year Burton was founded, in 1977. To commemorate the collection, Burton is also committing $300,000 over the next three years to causes within the snowboarding community dedicated to increasing BIPOC representation within the sport.

“We both figured out pretty early on that we wanted to create something bigger than just a collab with some product,” Burton chief creative officer Adrian Josef Margelist told FN today upon the auction kickoff.

Margelist first connected with Abloh in October 2020, shortly after joining Burton, to discuss a second collaboration with the designer. “It was an eight-month stream of ideas back and forth. Virgil said, ‘Let’s just set up a WhatsApp where we have both of our teams included,’” Margelist recalled. “And then we had our own private WhatsApp (thread). It was nonstop, every weekend, in the evenings. His idea to do something together to really make BIPOC riding inclusive in snow sports but also board sports: skateboarding, surfing, snowboarding. This manifest are his words.”

The manifest Margelist refers to is actually the contents of the boards currently up for auction. It partly reads: “Product that by its existence not only stands as evidence for the evolution of a subculture and sport but becomes an artifact which proves that diversity within snowboarding is not only an idea, it’s actually happening, care of Burton and Virgil Abloh.”

For Margelist, carrying the creative torch for Burton means not only representing Abloh’s posthumous collaboration with the snowboard brand but also keeping alive the legacy of its founder Jake Burton, who died in late 2019. “They both created ideologies,” he said of the two late visionaries. “It’s important for us to keep those ideologies going and to try to every day have a little bit of a positive impact on the world and on the environment and the community.”

Today, the Burton community includes team riders like Brolin Mawejje and Zeb Powell, who both took part in the new collaboration’s campaign. “The Manifesto says it well. It’s not just an idea; it is beyond the conversation. It is happening. We are watching it happen and will continue to watch the sport of snowboarding grow,” Mawejje said upon the brand’s collaboration release.

Boots and bindings from the collaborating will launch on Burton.com on March 22.