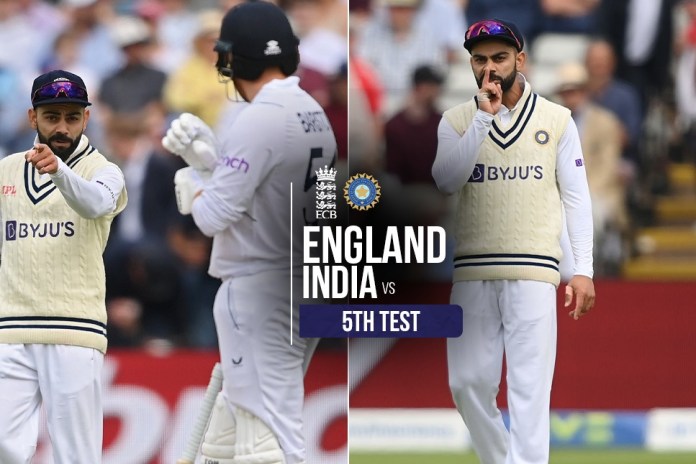 The reason for the altercation is unknown, but the skipper of both teams interfered with the umpires to stop matters from escalating. Virat Kohli who was positioned in the slip was seen gesturing Bairstow to shut up and bat on the crease. Virat pointed his fingers at Bairstow to show his anger.

On the other hand, Bairstow shrugged off Virat’s words. He too gestured at Virat Kohli with his hands as if on a sarcastic note to keep blabbering on. The confrontations did rattle Bairstow early on when Shami’s next delivery missed the stumps by mere inches. On the next ball, a mistimed shot from Bairstow crossed the ropes for a four.

Virat Kohli has always been an aggressive player both with the bat and while he is fielding. Kohli is someone who never shies away from returning back when he is sledged by the opponent. Therefore when Bairstow initially started the altercation, Kohli immediately retorted with a strong reply.

It’s tense out there between Virat Kohli and Jonny Bairstow 😳#ENGvIND pic.twitter.com/3lIZjERvDW

The altercation between the players continued from yesterday. Bairstow who smashed Kiwi bowler Tim Southee in the recently concluded series failed to score runs easily against the fiery bowling of Shami and Bumrah. This prompted Virat to sarcastically comment “Little bit faster than Southee, eh” to Bairstow yesterday.

However, the incident didn’t carry on further as during the over break, the incident was forgotten. As a gesture of fun, while crossing the crease, Virat when to Bairstow and sportingly punched his arm. It waits to be seen whether the battle between the two elite batters continues further during the day or not.