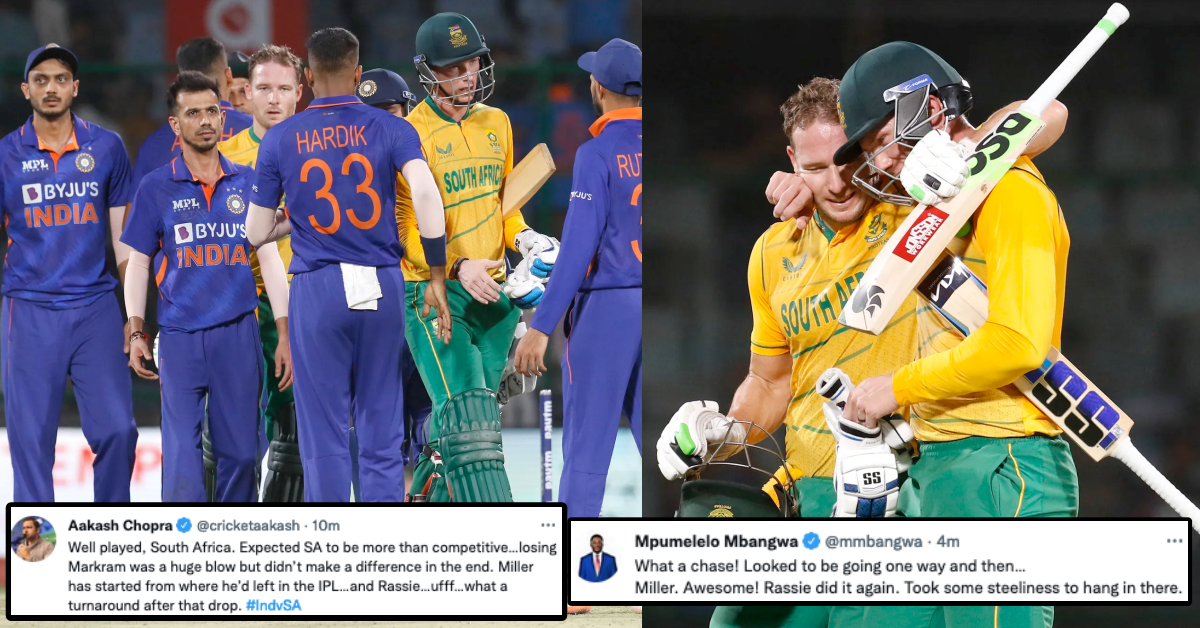 Earlier, South Africa won the toss and opted to bowl first in the match with an eye on restricting India to a below-par total. Star batting all-rounder Aiden Markram was tested positive for Covid-19 ahead of the game and debutant Tristan Stubbs was named as his replacement in the playing XI.

At the toss, India captain Rishabh Pant said that he also wanted to bowl first. Also, Dinesh Karthik made a comeback to the Indian team after 3 long years.

Ishan Kishan and Ruturaj Gaikwad opened the innings for India in the absence of KL Rahul and Rohit Sharma while Keshav Maharaj opened the attack for South Africa and he conceded 13 runs in the over.

At the end of the powerplay, India were at 51/0. On the second ball of the 7th over Ruturaj Gaikwad was dismissed by Wayne Parnell and he scored 23 runs off 15 balls, including 3 sixes.

In the next few overs, Shreyas Iyer and Ishan Kishan batted with an aggressive mindset and after 10 overs India were at 102/1.

Shreyas Iyer was dismissed by Dwaine Pretorius on the 1st ball of the 17th over and he was able to score 36 runs off 27 balls, including 1 four and 3 sixes.

Hardik Pandya and Rishabh Pant added 46 runs off 18 balls before the latter was dismissed by Anrich Nortje in the 20th over and the India captain scored 29 runs off 16 balls, including 2 fours and 2 sixes.

In the end, vice-captain Hardik Pandya scored brilliant 31 runs off 12 balls, including 2 fours and 3 sixes, to help India score 211/4.

Chasing the target, skipper Temba Bavuma got dismissed in the 3rd over itself. However, Dwaine Pretorius brought the momentum back to the Proteas team by playing a 29-run cameo knock.

South Africa wicketkeeper-batsman Quinton de Kock was dismissed by Axar Patel in the 9th over and he scored 22 runs off 18 balls, including 3 boundaries.

What a chase! Looked to be going one way and then…
Miller. Awesome! Rassie did it again. Took some steeliness to hang in there.#INDvsSA #SSCricket

Looks like this is the only way one can stop @DavidMillerSA12! What an amazing form he is in! pic.twitter.com/EZtLOdixev

This series supposed to be a tough one and South Africans are making sure of it. Team india needs to sort out the bowling, Especially First 5 and last 5 overs! #INDvSA

Well played, South Africa. Expected SA to be more than competitive…losing Markram was a huge blow but didn’t make a difference in the end. Miller has started from where he’d left in the IPL…and Rassie…ufff…what a turnaround after that drop. #IndvSA

In his next movie Clint Eastwood discovers time travel, comes back as Rassie Van der Dussen and wins WC for SA 😅 #INDvsSA pic.twitter.com/oKURrIFtfN

Shreyas Iyer lost this match for India, first he scored only 14 runs of his last 19 balls then dropped a regulation catch of Rassie van der Dussen & since that drop, RVD has scored 36 runs off the next 10 balls he faced.#INDvsSA

Indian team is looking like CSK team, captain changed before the match, scored 200+ and not able to defend! #INDvsSA

This has been one of the finest run chases in T20is – David Miller and Rassie Van Der Dussen, what an innings.

What happened to Van der Dussen with the change of bat? Looked somnolent till then, but haas roared back to life. India under the pump

rajasthan have a chance here #INDvSA

At one stage when Van Russen was struggling to get the ball off the square many would have thought he should retire out. Now he looks like the danger man for India in the remaining matches

India missing those 4 overseas players in the XI.#IndvsSA

The sheer suddenness of the move! #INDvSA #INDvsSA pic.twitter.com/2AViM1vDLo

Stellar year this guy is having, What a player#INDvSA https://t.co/nqcXRpI198

Moral of the story:

Never underestimate a Don who has scored 20+ runs in Jofra Archer over.

He might take some time to settle but once he is set only God can save you.

In a flat pitch even Pretorius playing superbly, I’m not surprising when ishan and pant scored today🤭. Giving chances to ishan, rutu, pant and others is not equal to chances given to Sanju in overseas and SL(where everyone failed) @BCCI🤡🤡#INDvsSA

0 interest in cricket without them 💙#INDvsSA pic.twitter.com/aKsDM71aDe

Claiming to have the best domestic T20 league globally, then going 4 matches down back to back on the international stage, with the latest defeat coming after scoring 210+ runs!
Guess our players only enjoy playing for the “crores” now!👏🥂#SAvsIND #IPL2022