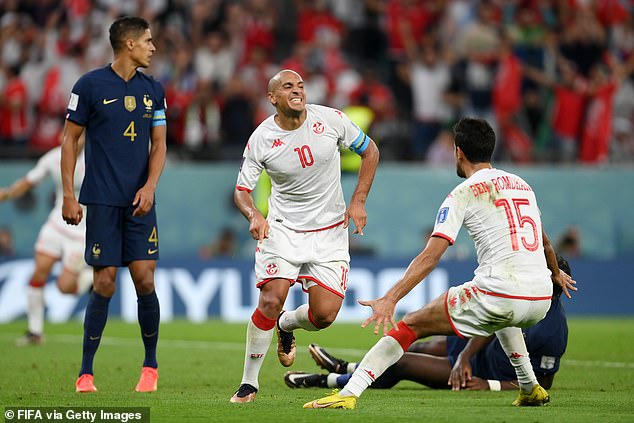 Tunisia crashed out of the World Cup on Wednesday despite pulling off a huge upset by edging a 1-0 win over France.

The odds were stacked against Jalel Kadri’s side as they looked to reach the knockout stages, with a shock victory over Les Bleus required to simply give themselves a fighting chance.

In the end they got the three points thanks to their captain Wahbi Khazri, who capped a terrific display when he netted what proved the winner after 58 minutes. 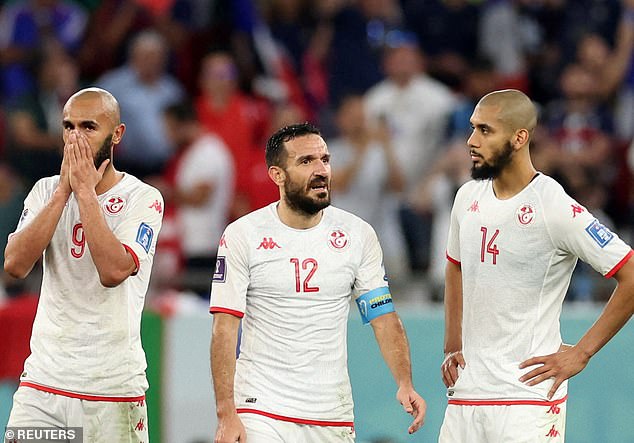 Just moments later, though, Australia struck their own winner against Denmark to ensure Khazri’s strike meant little, with the Socceroos heading into the last-16.

There was a late consolation for Tunisia when Antoine Griezmann’s last-gasp equaliser was disallowed by VAR, and on the whole they can leave Qatar with their heads held high after bowing out with a historic win. Sportsmail are on hand with player ratings from Wednesday’s Group D finale below.

Aymen Dahmen – France failed to test the Tunisia goalkeeper until late in the second half, but was on hand with a few important saves when called upon. 6

Yassine Meriah – Key part of a solid defensive display which restricted the world champions to very little up until Khazri struck. 7

Nader Ghandri – Thought he had made the early breakthrough before producing an assured showing to keep France at bay for the most part. 7 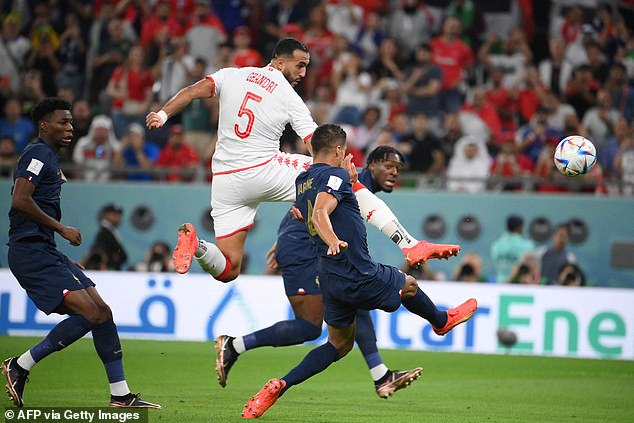 Montassar Talbi – Left for dead by Kingsley Coman at one stage of the second half and let off the hook when his failed clearance straight to Griezmann didn’t cost Tunisia. 6

Wajdi Kechrida – Enjoyed a number of swashbuckling runs down the right flank, but sometimes came off second best in his individual battle with Eduardo Camavinga. Booked. 7

Ellyes Skhiri – Played a vital role in Khazri’s winner after dispossessing Youssouf Fofana and releasing his team-mate to race through and score. 8

Aissa Laidouni – The classy midfielder was the driving force of an inspired Tunisia display up against one of the best young talents on the planet in Aurelien Tchouameni. 8 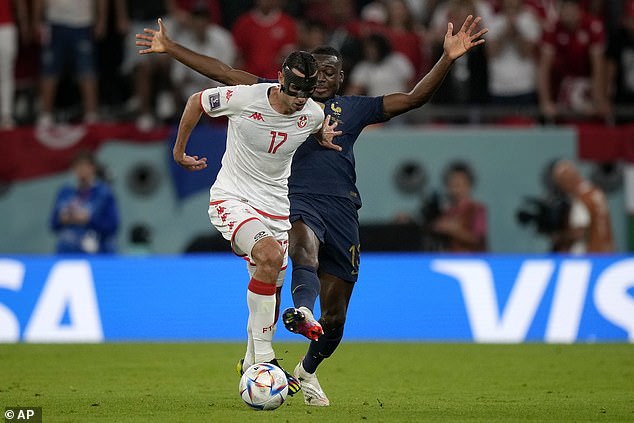 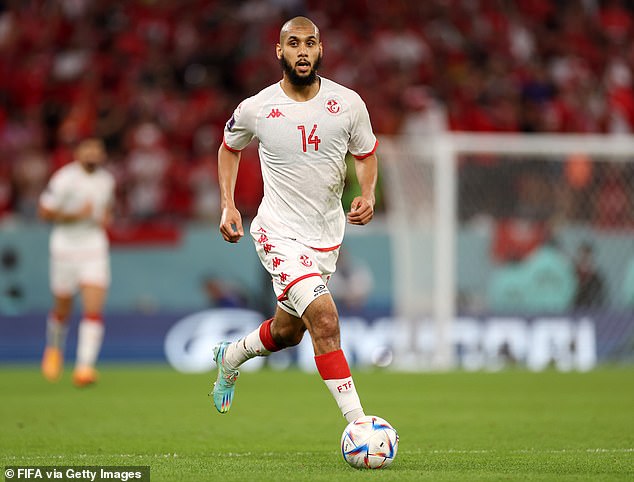 Ali Maaloul – Whipped in some dangerous crosses in a lively first half for Tunisia and largely kept Coman at bay. 7

Wahbi Khazri – A constant threat in the final third before getting the goal his superb display warranted when he glided past Raphael Varane and poked home. 9

Mohamed Ali Ben Romdhane – The 23-year-old was involved in a lot of Tunisia’s best work on the day and combined brilliantly with Khazri. 7 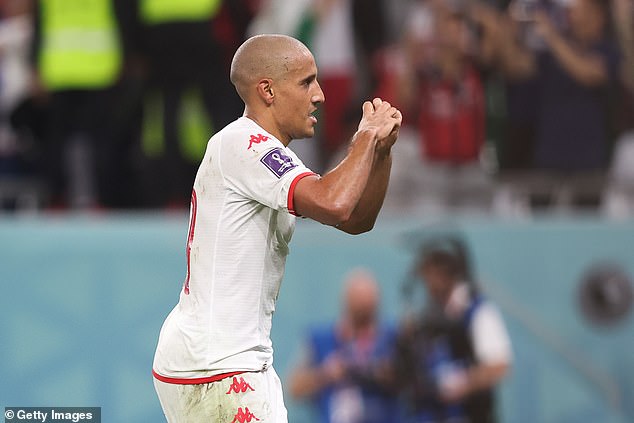 Steve Mandanda – Will be disappointed not to have kept out Khazri’s winner, which hardly flew into the back of the net with pace. 6

Axel Disasi – Not a debut to remember for the 24-year-old. Run ragged by the brilliant Maaloul and Romdhane in the first half. 5

Raphael Varane – Largely let down by a lack of protection from midfield, but was far too passive when Khazri breezed past him to net the winner. 5

Ibrahima Konate – Won most of his individual battles and didn’t put much of a foot wrong himself despite a sluggish France showing. 6

Eduardo Camavinga – Overcame a torrid opening 10 minutes after being deployed as a makeshift left-back and slowly grew into the game. 6

Youssouf Fofana – Cost France dearly when he was dispossessed by Skhiri far too easily on the halfway line. Also fortunate that Laidouni didn’t punish him for a failed attempt to shield the ball out of play earlier in the game. 4 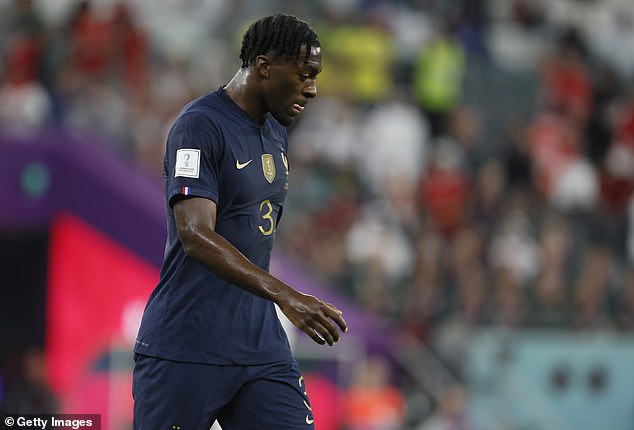 It was not an enjoyable France debut for Axel Disasi, who was run ragged in the first half 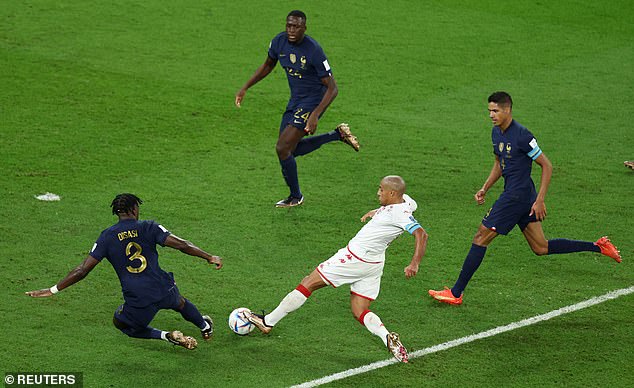 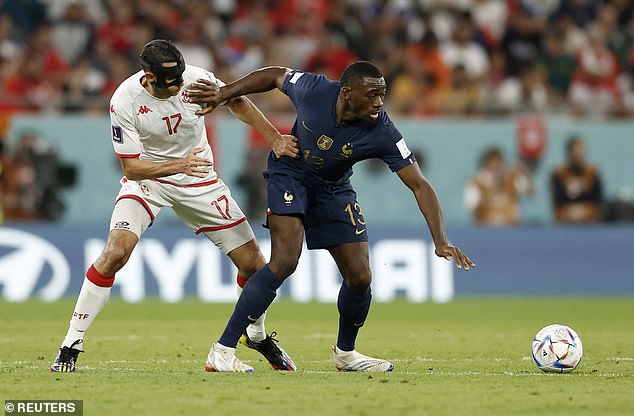 Aurelien Tchouameni – The Real Madrid midfielder was a calming presence on the ball at times and can hardly be blamed for this defeat. 6

Jordan Veretout – Another Les Bleus star who won’t want to remember this game in a hurry. Looked well out of sorts before being hooked off after 63 minutes. 5

Matteo Guendouzi – Pretty ineffective throughout and wasteful with the ball on the few occasions he found it. 5

Randal Kolo Muani – Enjoyed a few bright spells in the first half but, on the whole, had little to no service in attack. 6

Kingsley Coman – Wasted France’s biggest opportunity in the first half, but did appear their most dangerous attacking threat at times. 6 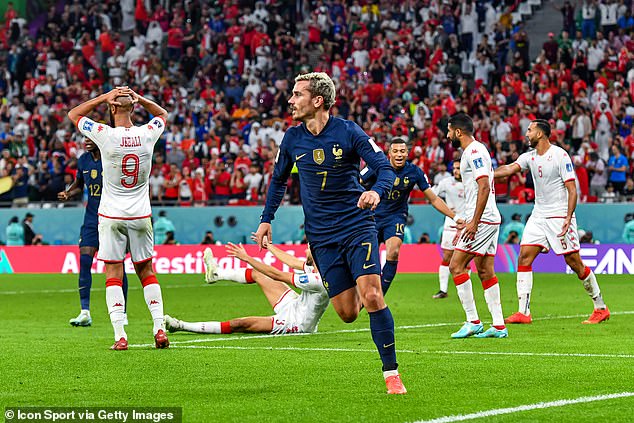