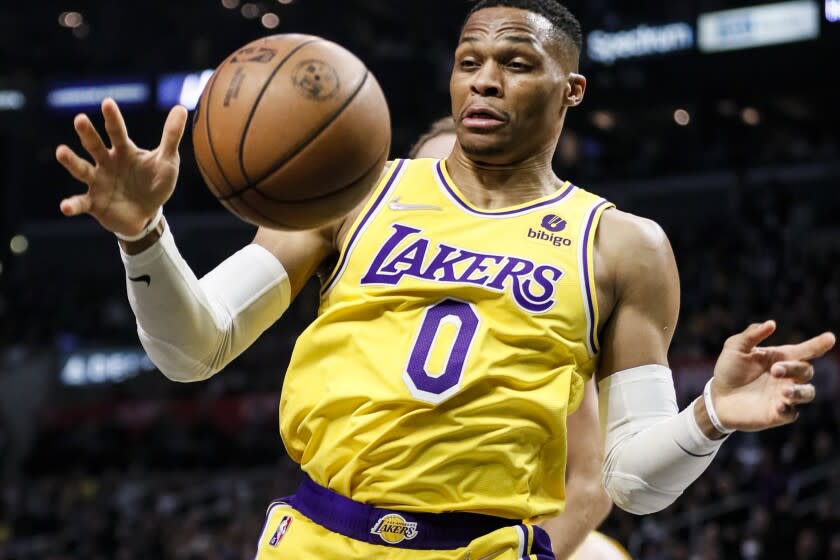 The ball yo-yoed from Russell Westbrook’s right hand to his left as Marcus Morris began what has been an increasingly easy assignment.

It was his job to stop him.

This time, Westbrook scooted past the Clippers’ veteran wing and slid underneath his arm for a slicing layup — for the Lakers, a rare victory where Westbrook looked more like the player they thought they were trading for than the one that they ended up getting.

Now with just 20 games left, the Lakers are faced with something that probably has been true since his first day in Los Angeles. Not hurting the Lakers isn’t going to cut it; they need him to help them win.

It’s a truth painfully exacerbated with Anthony Davis sidelined, the Lakers’ star big man again on the bench with a protective boot on his sprained right foot. It’s plastered in big, bolded letters whenever the Lakers look helpless on the court, LeBron James seemingly left to drag this team on his own.

It’s clear he can’t do it. The Lakers haven’t been able to find the role players to make life easier.

And so, they wait. For Westbrook.

In the Lakers’ three losses before Thursday’s 132-111 throttling, Westbrook made only 35.8% of his shots and none his three-pointers. Defenses have pulled so far back into the paint that if they sagged any more, they’d be in the seats.

He had seven turnovers in a loss to the Pelicans, and 12 missed shots in losses to the Clippers out of the All-Star break and to the Mavericks earlier this week.

He had 17 points, eight rebounds and three assists Thursday, a fine offensive performance but one that paled in comparison to Reggie Jackson’s electric 36-point game.

Westbrook hasn’t really flirted with that level of production all season.

His last 20-point game came on Jan. 30 and he has scored 30 or more only four times this season. And his and the Lakers’ inability to space the floor with him on it has affected his playmaking. Since the start of 2022, he’s averaging only 5.7 assists, the passing lanes clogged because of the team’s deficiencies.

Things have been so bad, that postgame Frank Vogel said the coaching staff has discussed bringing Westbrook off the bench — an option that certainly falls under the “we’ve talked about everything,” umbrella Vogel opened twice when asked directly about it.

For the NBA’s triple-double king, production is just down all over the board. Since Jan. 1, he has only three games with 10 assists and only five with at least 10 rebounds.

Westbrook’s made a familiar claim Thursday, that his frequent role changes have been the source of his struggles.

“My role and what I’m doing has changed every single night, so I’m just trying to figure that out as I’m playing and to be able to benefit and help my team,” Westbrook said. “But my expectations are still the same. I’m not a quitter. It’s not in my genes. I don’t quit, regardless of what the hell is going on. I’m going to fight to the end and if it don’t work, that’s cool, too. I can live with the results. But I’m never going to give up or give in because of a little struggle that’s happening this time of the year.”

See also  Draymond Green was not happy on bench in fourth, but should Kerr do it again?

After the team’s loss Tuesday, Westbrook was more expressive with his frustration than usual. Typically projecting calm regardless of the circumstances — triple-double or turnover trouble — he stared at the stat sheet and mumbled to himself in between terse answers. He also pounded his fist against the table.

“One, we lost,” he said Tuesday when asked about his reactions. “No. 2 is looking how I need to be better. That’s it.”

The two are intertwined, no doubt. The Lakers are 21-6 this season when the team wins the minutes Westbrook is on the floor, and 6-28 when he’s a negative in plus/minus rating as he was Thursday.

That particular stat might’ve been a little misleading against the Clippers on Thursday, Westbrook one of five players on the floor during the Clippers’ 23-0 run in the third quarter. (In the first half, the Lakers won Westbrook’s minutes by 12 points).

And while the game was still competitive, he did some of the things the Lakers need to have if they want to hang on to one of the final spots in the NBA’s postseason play-in tournament — a fate they loathed a year ago and one they’re left clinging to this spring.

He sprinted down the center of the court and challenged Ivica Zubac at the rim, powering through him, scoring and drawing a foul, punctuating the basket by rolling his shoulders up and forward as he smiled at the Clippers’ center.

Westbrook also howled at the fans after slamming home a lob from Austin Reaves, a rare above-the-rim highlight.

The loss wasn’t on him — they all haven’t been. But the problems the roster took on by acquiring him — the trade that sent out competent defenders Kentavious Caldwell-Pope and Kyle Kuzma, the cap constraints that aided Alex Caruso’s departure, etc. — are a battle the Lakers lose almost every night.

As the crowd chanted Jackson’s name in the fourth quarter and the veteran got past the Lakers’ defense and skipped on the floor in celebration, none of Westbrook’s positives mattered. They weren’t even close, with Jackson, a player making one-fourth the salary this season as Westbrook, exiting to a standing ovation.

Jackson nearly added to the lowlight reel, a wicked crossover dribble forcing Westbrook to swing his foot as a last line of defense saving what surely would’ve been another viral moment.

Westbrook was on the positive side of OK on Thursday, a welcome change in a season where he has not been that enough. But the Lakers don’t need good. They need great, especially now.

And Westbrook and the Lakers are running out of time to get it.

As he walked into the postgame news conference Thursday in a red leather shirt and matching pants, Westbrook looked down at the stat sheet again — this time his word coming through plenty clear.