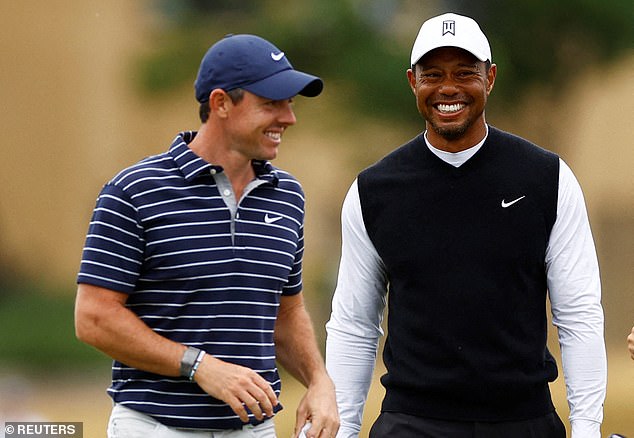 Tiger Woods confirms return to golf at next month’s Hero World Challenge in the Bahamas alongside Rory McIlroy and Jordan Spieth, despite previously saying he wouldn’t play again this year

By Riath Al-samarrai For Dailymail.Com

Tiger Woods will end a four-month break from competitive golf by playing in the Hero World Challenge in December.

The 15-time major winner confirmed on Twitter that he will tee up in the 20-man annual event he hosts in the Bahamas, which commences on December 1 and marks his first start since he missed the cut at The Open in July.

He will make a further appearance a week later on December 10 in ‘The Match’, a 12-hole exhibition alongside Rory McIlroy, Jordan Spieth and Justin Thomas.

Tiger Woods is ready to return to golf, alongside Rory McIlroy (left) as soon as next month

The additions to Woods’s schedule, albeit limited, offer a positive sign about the state of his fitness as he battles the impact of injuries sustained in a serious car accident in 2021, not least because he indicated he might not play again this year after struggling at St Andrews in the summer.

Meanwhile, former Ryder Cup team-mates Tommy Fleetwood and Francesco Molinari have been named as opposing captains for the new Hero Cup in January.

Fleetwood will lead the British team of 10 against Europeans spearheaded by Molinari, with whom he won all four matches in the ‘Moliwood’ pairing at the 2018 Ryder Cup.

The inaugural Hero Cup, which will take place in Abu Dhabi, has been designed by the DP World Tour as a Ryder Cup breeding ground that will serve to condition rising European stars for future appearance in the biennial match with the US.