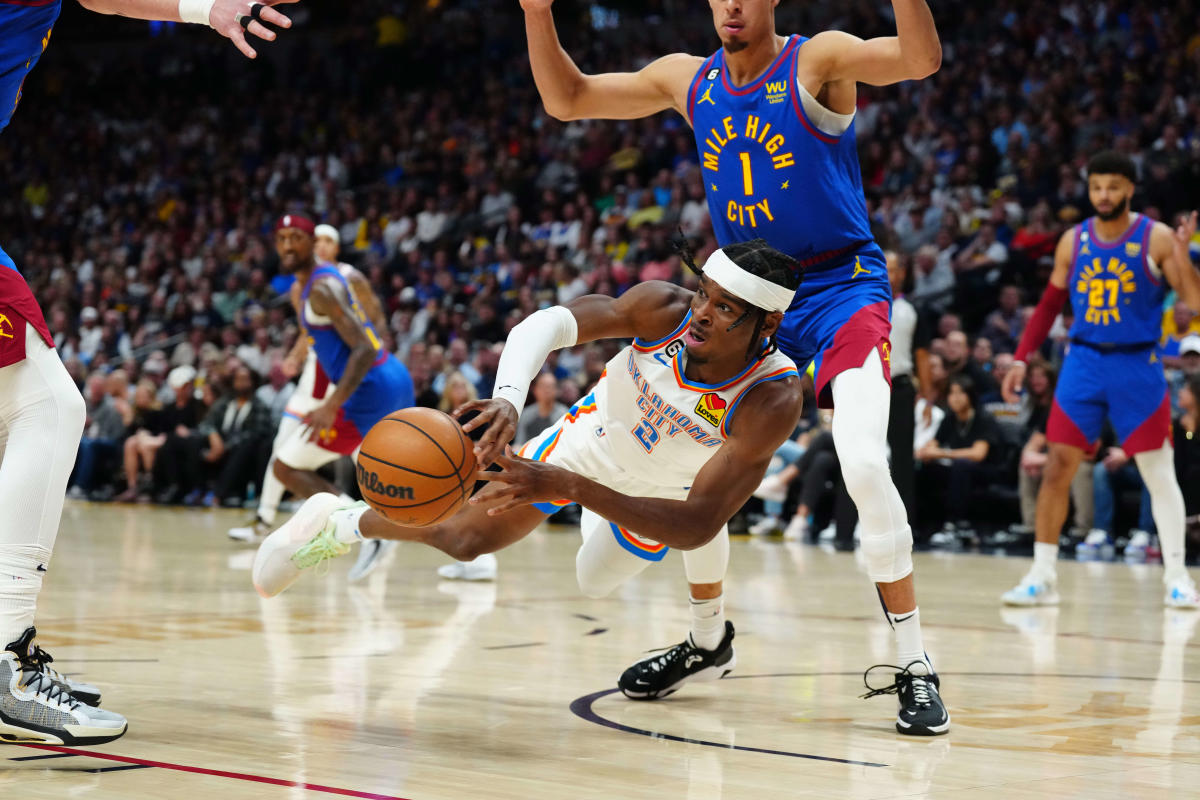 In the first of four matchups this season, the Thunder came up short against the Nuggets and lost 122-117 in a game that saw 11 ties and 11 lead changes.

The Thunder offense was not able to keep up with the Nuggets down the stretch and resorted to intentionally fouling the Nuggets in the final moments of the game.

Ultimately, the lack of experience and talent on the Thunder is what cost them this game in the final minutes as there were multiple possessions that went bad quickly.

The Nuggets were led by two-time MVP Nikola Jokic, who finished with a triple-double of 19 points, 16 rebounds and 13 assists. Michael Porter Jr. added 22 points and Kentavious Caldwell-Pope’s six threes contributed to his 21 points.

For the Thunder, let’s take a look at player grades for the five players that stood out the most in this valiant loss.

Shai Gilgeous-Alexander continues to play like one of the best scorers in the league over his last 24 games, averaging 28.6 points on 51.5 percent shooting.

That continues this game as Gilgeous-Alexander scored 28 points on 11-of-24 shooting to go along with seven assists. Despite facing a big Nuggets frontcourt, Gilgeous-Alexander continuously drove to the basket and used a variety of creative finishes to work his way around their length.

There were a couple of missed threes at the end of the game that Gilgeous-Alexander missed, but aside from that, it’s hard to really complain about his night.

The shooting luck wasn’t there for Josh Giddey tonight as he missed multiple bunnies that he usually makes, but besides that, he had a great game.

Giddey finished with 19 points on 8-of-17 shooting, 12 rebounds and six assists.

See also  LeBron James clarifies comments, reaffirms commitment to 'purple and gold as long as I can play'

Much like his backcourt partner, Giddey did most of his scoring damage in the paint — specifically deep inside the paint and right underneath the basket.

The highlight of the night for both teams also easily belongs to Giddey, as he was able to dish out his assist laying on his back in the fourth quarter to Tre Mann. Giddey’s passing has been talked about plenty since entering the league, but this was just an absurd play.

This was not Lu Dort’s night as he was colder than Oklahoma in October from the perimeter.

Dort scored 13 points but on 3-of-13 shooting that included going 1-of-7 from three. Dort started the game by going a quick 0-for-6 in the opening minutes of the first quarter.

Dort hit a timely three in the fourth quarter as the teams went back and forth and was able to go 6-of-8 from the free-throw line, but besides that, it was a tough shooting night for him.

The Thunder needed scoring and Mike Muscala provided that off the bench. Muscala finished with 18 points in 19 minutes and shot 6-of-10 from the field and 4-of-7 from three.

See also  LeBron James has epic 56-point game, tells Matthew Stafford the show was for him

The 18 points were more than what the starting frontcourt of Aleksej Pokusevski and Jeremiah Robinson-Earl had at 10 points.

The only downside of having to rely on Muscala against a big team like the Nuggets means he has to defend someone like Jokic on multiple possessions and those went about as bad as one can imagine.

Tre Mann had a good game off the bench as he finished with 13 points on 5-of-11 shooting and dished out four assists.

The only serious complaint about Mann from this game could be him just taking 11 shots in 28 minutes. Mann is one of the more talented scorers on the team, which means it’ll benefit the team for him to be a bit more selfish.

Some of the shots that went to someone like Dort — who didn’t have it tonight — could’ve gone to Mann instead.