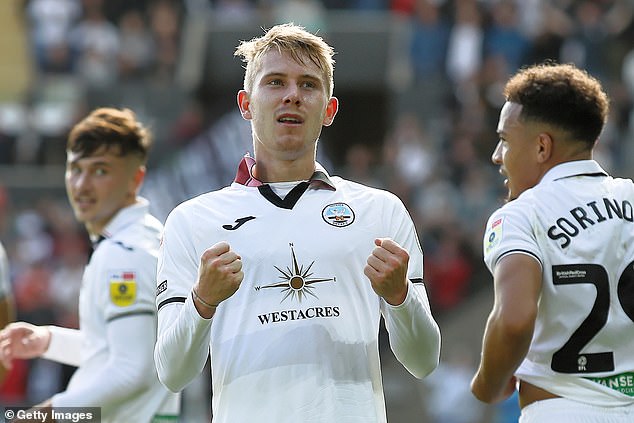 Swansea 2-0 Cardiff: Oliver Cooper and Michael Obafemi strike to seal three points in South Wales derby – after Bluebirds striker Callum Robinson was sent off for throwing the ball in an opponent’s face

By Graham Thomas For The Daily Mail

Swansea City confirmed west is nowadays always best when it comes to the South Wales derby with another dominant victory.

A goal in either half from Ollie Cooper and Michael Obafemi gave the second city a third consecutive entirely comfortable victory over their rivals from the capital.

It might have been a different story had Cardiff striker Callum Robinson not been given a straight red card for a moment of madness in the sixth minute of a typically feisty derby in which there were also five yellow cards. 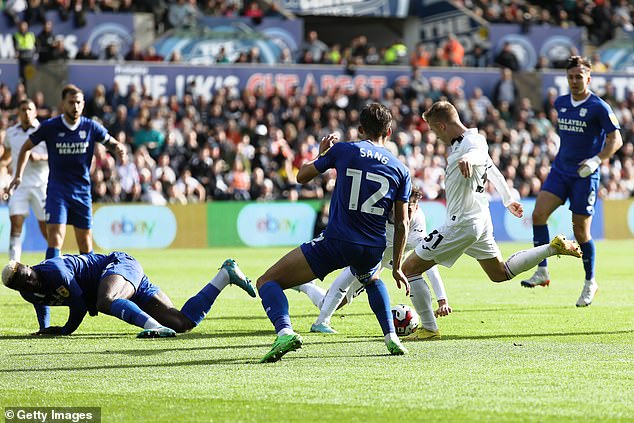 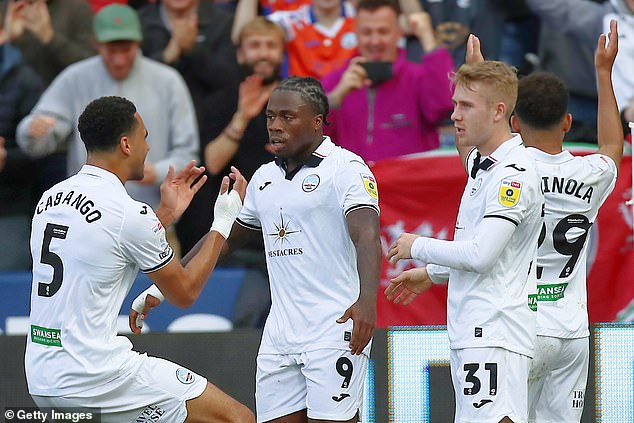 See also  West Ham 2-0 Wolves: Scamacca and Bowen strike to climb the Irons out of the relegation zone 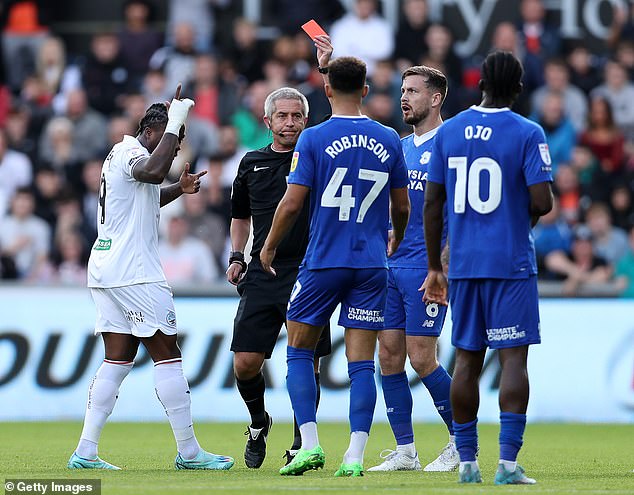 But Robinson’s temperamental implosion – an unchallengeable dismissal for throwing the ball into the face of Ben Cabango – hints at a deeper inferiority complex for the Bluebirds.

They have now lost six of their last eight meetings against their biggest rivals during which time the aggregate score now stands at a remarkable 15 goals to one.

The outcome is that Swansea move up to fourth place in the table on the back of six wins in eight matches, while Cardiff’s third successive defeat drops them to 20th in the Championship.

There were some typically thunderous and full-blooded challenges in the opening minutes, but the game soon settled into a familiar pattern of the last couple of meetings of Swansea passing and Cardiff chasing.

But not even the raucous nature of the first six minutes could explain the reckless loss of control shown by Robinson that earned him an instant red card.

The former West Brom striker was given a nudge in the back by Cabango as he waited under a high ball, but his reaction was still shocking.

Without hesitating – and under referee Darren Bond’s gaze – the forward threw the ball, with force, full into the face of Cabango from point blank range.

The Wales international defender cupped his hands around his nose and the official immediately branded a red card. 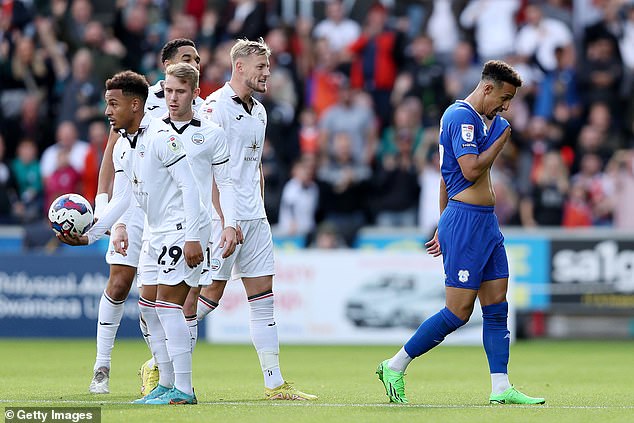 Cardiff’s caretaker manager Mark Hudson may have taken meticulous care in his planning and preparation for his first derby in charge, but his hugely experienced striker had just thrown the whole strategy out of the window.

Little wonder that Hudson just shook his head in despair as Robinson trudged off.

Swansea tried to stretch Cardiff’s reduced resources on both flanks, but it took until the 20th minute for the home side to create a clear opportunity.

Michael Obafemi was released through the middle, but although he neatly turned inside Curtis Nelson, the striker dragged his shot wide. 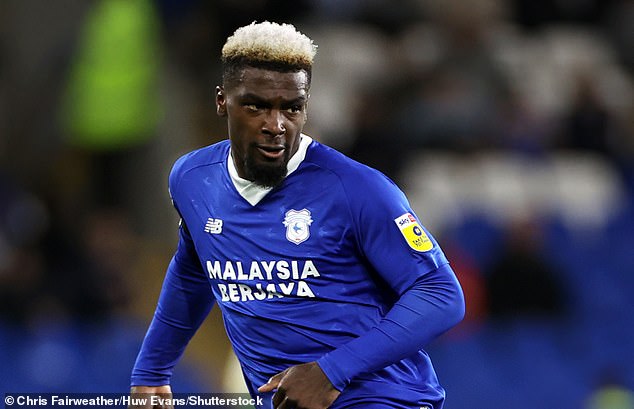 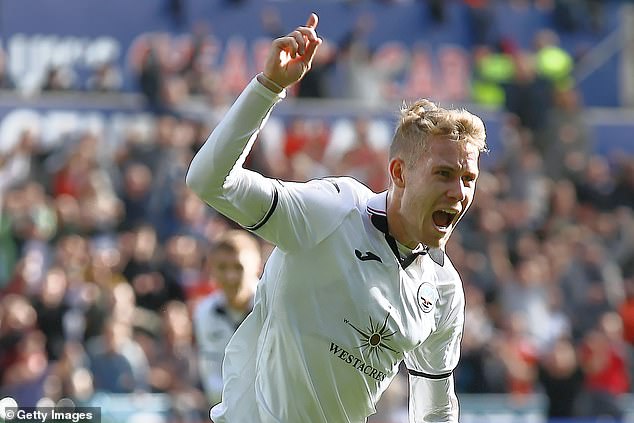 Shortly after Kipre’s incident, Oliver Cooper gave the hosts the lead with a well-taken finish

Swansea were finding it hard to remain accurate even though their possession was overwhelming, but they felt justifiably aggrieved Cardiff defender Cedric Kipre appeared to punch the ball clear from Cabango’s cross – a misdemeanour not spotted by the officials.

It mattered less two minutes later, though, when Cooper gave them a deserved lead.

At the end of a patient attack, Luke Cundle appeared to have lost control in the box but when the ball fell to Cooper the midfielder showed alertness and calm to open the scoring with a curling shot. 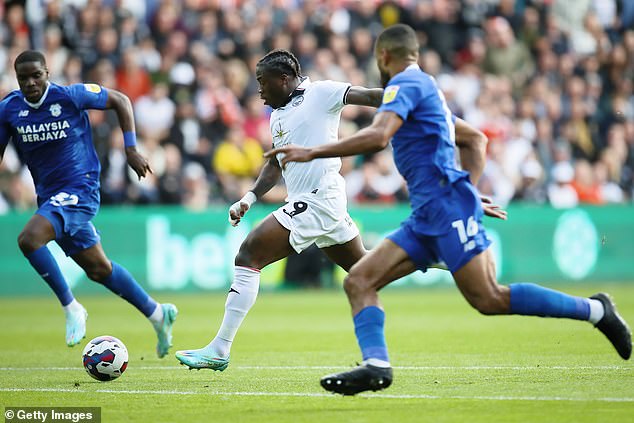 It was the kind of quality and composure that underlines why many are tipping the 22-year-old for inclusion in the Wales squad for next month’s World Cup.

Cardiff’s only real threat came during a brief flurry at the start of the second-half, when Mark Harris headed over from Callum O’Dowda’s cross.

Normal service – and the result – was confirmed in the 67th minute when Matt Grimes threaded a beautiful pass for Obafemi to make amends from the same position as his earlier miss.

The Republic of Ireland striker might have had two further goals as 10-man Cardiff tired, while Cabango also had a singing effort tipped over the bar.