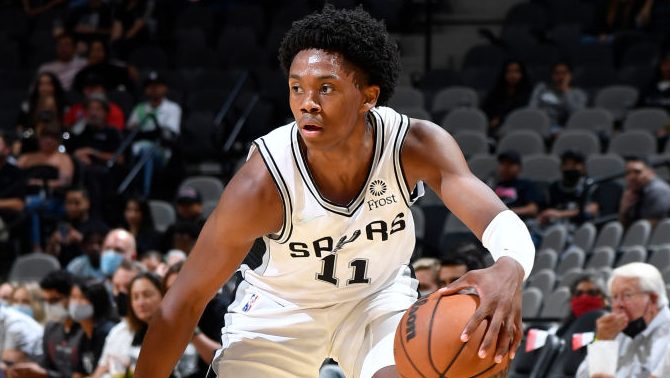 There has been a sense it had to be something serious. The San Antonio Spurs would not have just waived Josh Primo, a promising young forward they drafted No.12 in 2021, without serious justification.

Primo allegedly had exposed himself multiple times to female members of the Spurs staff, reports Ramona Shelburne and Adrian Wojnarowski of ESPN.

The San Antonio Spurs’ release of guard Joshua Primo — the No. 12 pick in the 2021 NBA draft — stemmed from multiple alleged instances of him exposing himself to women, sources told ESPN on Saturday…

Also on Saturday, attorney Tony Buzbee told ESPN he has been retained by a woman who worked for the Spurs and has alleged Primo exposed himself to her. Buzbee represented multiple women in the sexual misconduct lawsuits against Cleveland Browns quarterback Deshaun Watson.

Earlier, Primo had released a statement to Wojnarowski saying he needed to be away from the team to deal with a mental health issue.

“I know that you all are surprised by today’s announcement. I’ve been seeking help to deal with previous trauma I have suffered and will now take this time to focus on my mental health treatment more fully. I hope to be able to discuss these issues in the future so I can help others who have suffered in a similar way. I appreciate privacy at this time.”

“It is our hope that, in the long run, this decision will serve the best interest of both the organization and Joshua,” Spurs CEO and player/personnel executive RC Buford said in a statement.

Exhibitionism, including exposing oneself to others as Primo is alleged to have done, is a mental health disorder listed in the Diagnostic and Statistical Manual of Mental Disorders (DSM), a guidebook widely used by mental health professionals. It is not uncommon and makes up about a third of the sex crimes reported in the United States, according to Psychology Today.

Primo, 19, averaged 23 minutes a night for the Spurs this season, scoring 7 points a game. The Spurs had pictured him as a wing who could be a secondary shot-creator on an elite team, a point forward who could run the offense at points.

His talent has other teams considering picking Primo up on waivers, Shelburne and Wojnarowski report (although every team outside of the Pacers would have to make a move to clear cap space to do it). Teams would be on the hook for his $4.1 million salary this season and his $4.3 million option the Spurs picked up for next season. Teams also could hope he would clear waivers, at which point they could sign him to a contract.

Check out more on the Spurs

Report: Spurs released Primo because he allegedly exposed himself originally appeared on NBCSports.com