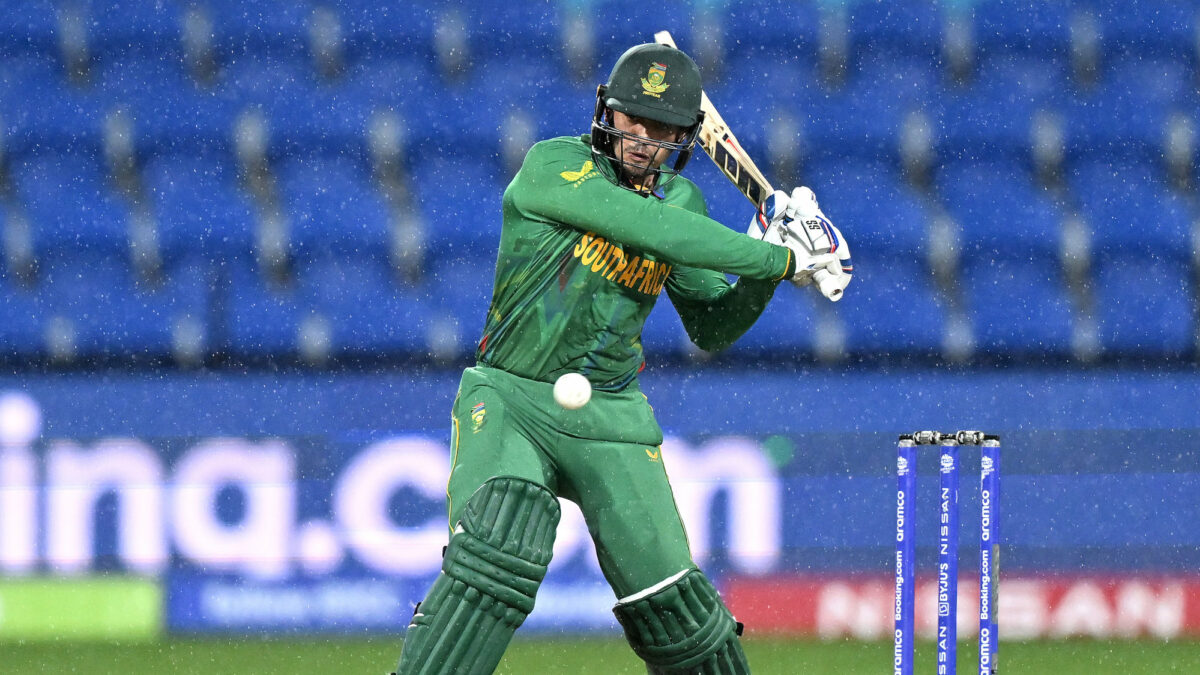 If it needed to be proved, so it was in the Hobart rain on Monday night – no sport can compete with cricket when it comes to farce.

After more than four hours of stop-start play between South Africa and Zimbabwe due to persistent rain, two different adjustments to the required overs to complete the match and featured players slip-and-sliding like they were at a water theme park, umpires Ahsan Raza and Michael Gough finally accepted the inevitable and called play to a halt for the fourth and final time.

With South Africa having completed just three overs of their run chase, below the requirement of five for a completed match, both teams will share the spoils – and one T20 World Cup point apiece – from a truly bizarre match.

Cruelly, the Proteas were just 13 runs away from their Duckworth-Lewis-Stern adjusted victory target of 64 with four overs to make them thanks to an incredible onslaught from Quinton de Kock; yet they were denied two crucial competition points, and a handy net run rate boost, as Zimbabwe did everything in their power to prevent the match being completed at the death.

In fairness to them, their case was a sound one – the conditions were sufficient to make the continuation of play for as long as it did inexplicable.

Bowler Richard Ngarava suffered an apparent leg injury after slipping over in his follow-through, limping from the field, while Zimbabwean wicketkeeper Regis Chakabva also took a tumble on the waterlogged Blundstone Arena turf.

See also  IND vs AUS: India Should Follow Template Where Other Players Bat Around Virat Kohli

De Kock finished unbeaten on 47 from 18 balls, a remarkable onslaught that featured five consecutive boundaries off a hapless Tendai Chatara from the first five balls of the Proteas’ run chase.

Such was his dominance that even three or four further balls may have been sufficient to chase down the total, which had already been reduced from 80 to 64 thanks to another downpour early in the Proteas’ innings.

With the match initially slated to begin at 7pm local time, a shower immediately following the pre-match national anthems forced both teams back into the rooms, where they would remain for more than two and a half hours.

The rain would intermittently abate long enough to threaten a resumption, but it wasn’t until 9:35pm – just ten minutes before the cut-off that would have forced the match to be abandoned under ICC rules. Enough time had been lost, though, for the match to be more than cut in half, the overs reduced from 20 per team down to nine.

The two African nations did their best to provide some entertainment for the bedraggled pocket of fans who had braved the conditions and the delay, with a late onslaught from Wessly Madhevere dragging Zimbabwe to a competitive 5/79.

Such a score looked unlikely when the top order, seemingly spooked by the shortened innings, swung wildly and haphazardly at Proteas quicks Kagiso Rabada and Wayne Parnell.

Captain Craig Ervine fell mis-hitting Parnell to mid-on for a simple Lungi Ngidi catch for a painful six-ball two – indeed, he might have been relieved to simply lay bat on ball.

Chakabva swung Ngidi for a six to finally put some pressure on the Protea bowlers, but would edge behind to de Kock just one ball later to continue the rot. The keeper would then provide the first proper highlight – and the first of many for him for the night – with a flying one-handed catch to remove Zimbabwean danger man Sikandar Raza just two balls later.

When Sean Williams and Madhevere comically collided mid-pitch to ensure the former would be run out by David Miller (one of three possible run outs in the opening overs), Zimbabwe were 4/19 and facing the real prospect of being bowled out in a rain-shortened game.

But a 60-run stand between Madhevere and Milton Shumba, only ended when the latter gave de Kock a third catch for the innings off the final ball, added some respectability to the scorecard.

Madhevere was the only Zimbabwean batter who appeared unruffled by the reduced innings – swinging fiercely but sensibly, he used the pace of the South African quicks to full advantage with strokeplay both clever and brutal.

Whether uppercutting Rabada over de Kock for four, to a sumptuous cover drive off Ngidi, Madhevere’s 18-ball 35 was more than enough to hint at a bright future for the talented 22-year old.

Not helping South Africa’s case was a string of bizarre incidents in their final over, to add yet more drama to a match already full of oddities.

So adamant were the Proteas that Shumba hadn’t offered a shot to a searing Nortje yorker that ricocheted off the batter’s pads and away for four leg byes, that they reviewed solely to attempt to have the ball called dead.

The third umpire was unmoved, though – and another obscure rule would bite them shortly after, conceding five penalty runs after a throw from the deep ricocheted off de Kock’s knee, and right into his discarded wicketkeeping glove.

With the rain still lingering, the Proteas were keen to make short work of the target – and with captain Temba Bavuma needing to wait until the third over of their innings to so much as face a ball, it was a one-man onslaught from de Kock to halve the ask in rapid time. 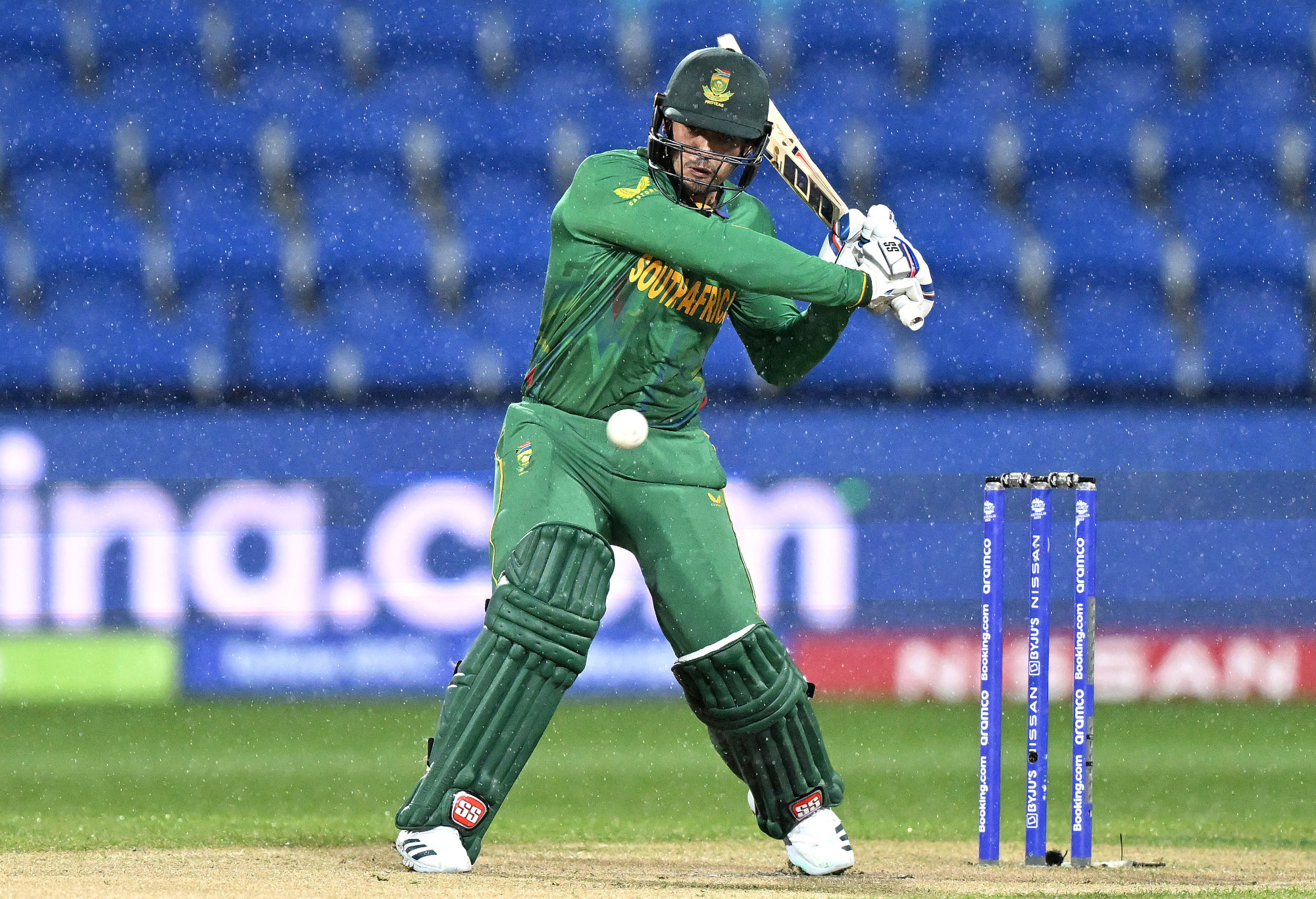 Remarkably, nine of the 13 balls de Kock faced in overs from Chatara and Ngarava went to or over the boundary, the left-hander taking 40 off the first two.

The reduction of the target to 64 following yet another rain delay mattered more than the reduction of overs from nine to seven – the true enemy now for de Kock and the Proteas was once again the weather.

Ngarava’s slip following the final ball of his over – for the record, de Kock laced a cut straight to the deep point boundary – cost South Africa more precious minutes as the bowler first received attention on the pitch, then gingerly hobbled off.

Next it was Zimbabwe’s turn to turn to the DRS for reasons other than chasing wickets, reviewing an LBW shout against de Kock off Raza.

The ball was only clipping the stumps, upholding the on-field call of not out – but critically, precious minutes had been wasted.

It was enough to raise the ire of South African women’s international Marizanne Kapp, taking to Twitter to accuse Zimbabwe of time-wasting.

Ludicrously, as the rain continued to lift in intensity, the umpires set up for a fourth over – only for Zimbabwe to take matters into their own hands.

With Sean Williams pleading with Gough and Raza to end play, the pair finally relented, calling the groundstaff on with victory in sight for the Proteas.

“I was just trying to lip-read Williams there, at the end of his run-up – and he said something like ‘Come on, this is a World Cup’ to the umpire,” commentator and former England captain Nasser Hussain observed on commentary.

“South Africa, obviously, haven’t done anything wrong – they wanted to get on with it earlier. It’s the rain in Hobart, that’s what’s done us.”

The match could have continued had the umpires wished if the latest break had been eight minutes or less: thankfully, both teams and those watching on were spared any further farce.

It had taken an injured bowler, four separate rain breaks and hours’ worth of rain, but finally, everyone had been put out of their misery.

And after all that, South Africa and Zimbabwe had to settle for a no result. No other sport on the planet could take four hours to end up right back where we started.