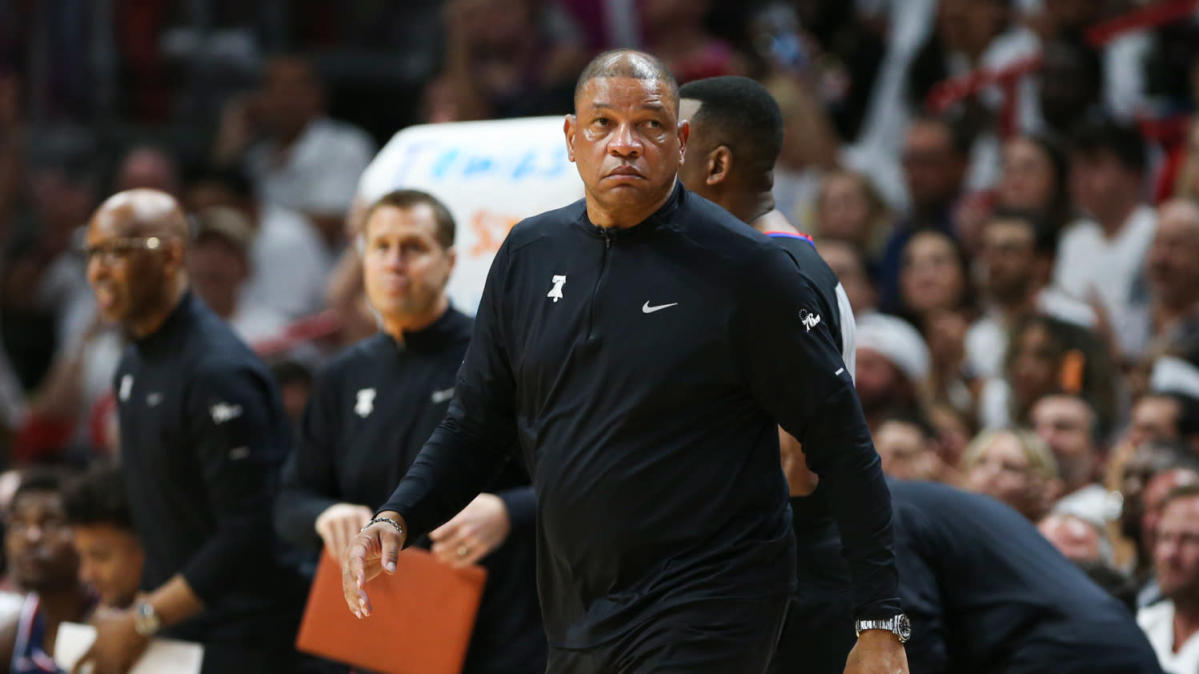 Rivers: Sixers will keep starting Jordan ‘whether you like it or not’ originally appeared on NBC Sports Philadelphia

MIAMI — One could read between the lines on Sixers head coach Doc Rivers’ remarks leading into Monday night’s Game 1 against the Heat in many different ways.

In retrospect, a comment he made Saturday came to mind about the team’s plan at center with no Joel Embiid to begin the second round of the playoffs.

Rivers seemed to know that his choice for a fifth starter would be scrutinized — and perhaps not received well.

“We’re going to try anything,” Rivers said the first day after the Sixers announced Embiid had a right orbital fracture and concussion. “Really. We’re not going to be shy with playing different guys. I know you guys want to make a big deal about the first three minutes. Whoever is announced in the starting lineup, it doesn’t matter to us — I’m telling you that now. … We’re worried about the last six minutes. That’s going to be the key for us in this series.”

By the six-minute mark of the fourth quarter Monday, the Heat’s lead had swelled to 21 points. Charles Bassey played the final 4:36 of the Sixers’ Game 1 loss at FTX Arena.

Of course, the rookie big man was neither Rivers’ preferred closer nor his starter. DeAndre Jordan got the nod.

Bam Adebayo converted a short jumper over Jordan to give Miami a 4-0 lead. Not a big deal by itself or a shot that others would have surely denied. But 80 seconds into the game, Jordan dropped a James Harden pass to him in the dunker spot that wasn’t especially low, high, fast or surprising. Jimmy Butler then drove at Jordan on a pick-and-roll and Adebayo got a put-back layup — 9-2.  Soon enough, Rivers needed a timeout.

He opened with Jordan in the second half, too. Though that stint went better, the Sixers were outscored by 22 points during Jordan’s 17 minutes. The team was not remotely successful at working around his diminished mobility and lack of versatility.

The 33-year-old will start Game 2, according to Rivers.

“We just felt like … we talked to our guys,” Rivers said. “They wanted a big guy, a big roller. I thought in the second half, that’s how he has to play every night. Those first four, five minutes (of the third quarter) were great from him. That’s what we need. We also love Paul (Reed), but we don’t need Paul in foul trouble and that’s why you don’t want to start him.

“We like DJ. We’re going to keep starting him whether you like it or not. That’s what we’re going to do, because our guys believe in him. It’s funny, at halftime we asked our key guys, because we were thinking about it — because I thought Paul Millsap gave us some decent minutes. And to a man, that’s where they wanted to go.”

Rivers noted the 22-year-old was on the floor during a third-quarter stretch when Miami controlled the offensive glass.

“Listen, I don’t love the matchup with Paul and Bam,” Rivers said. “It’s funny, I took DJ out right before that and he was actually rebounding the ball and playing well for us. But we wanted more speed on the floor so we could do more switching. When we go zone and switch, we like Paul Reed out on the floor more, and that’s what we did there. Unfortunately, they crushed us on the glass at that point. They took 13 more shots than us tonight, and that was big.”

As for Reed, fouls remain a real concern. His chaotic style can be energizing and productive, but he often has struggled to find a slightly lower gear.

“It’s hard, man,” Reed said. “It’s hard. I’m an aggressive player, so I go out there, I give 125 percent, and sometimes it just doesn’t work out for me, like tonight. One thing I’ve got to learn is to sometimes let them score. But it’s hard. It’s pride. I don’t want to be letting anybody score. That’s one thing I’ve got to do better next game, and that’s something I will do better, for sure.”

Entering Game 1, it looked quite possible that Rivers had a multiple-choice test with no right answers.

Some choices may very well have been more wrong, though. At a minimum, anyone watching saw that starting Jordan did not work as intended.

The most encouraging look at center for the Sixers was small ball.  With a Tobias Harris-Georges Niang frontcourt, the team closed the first half on a 10-2 run and took a one-point lead into the break.

That unit’s success is a tad less encouraging, however, if Rivers does not think he can use it much.

“I liked it,” Rivers said. “You’ve got to try to pick the spot. They stayed with Bam a lot longer in the second half because, I really believe, our small ball in the first half. So I did like that lineup. That lineup gave us a rush to end the half. It’s a lineup we need work on, though.”