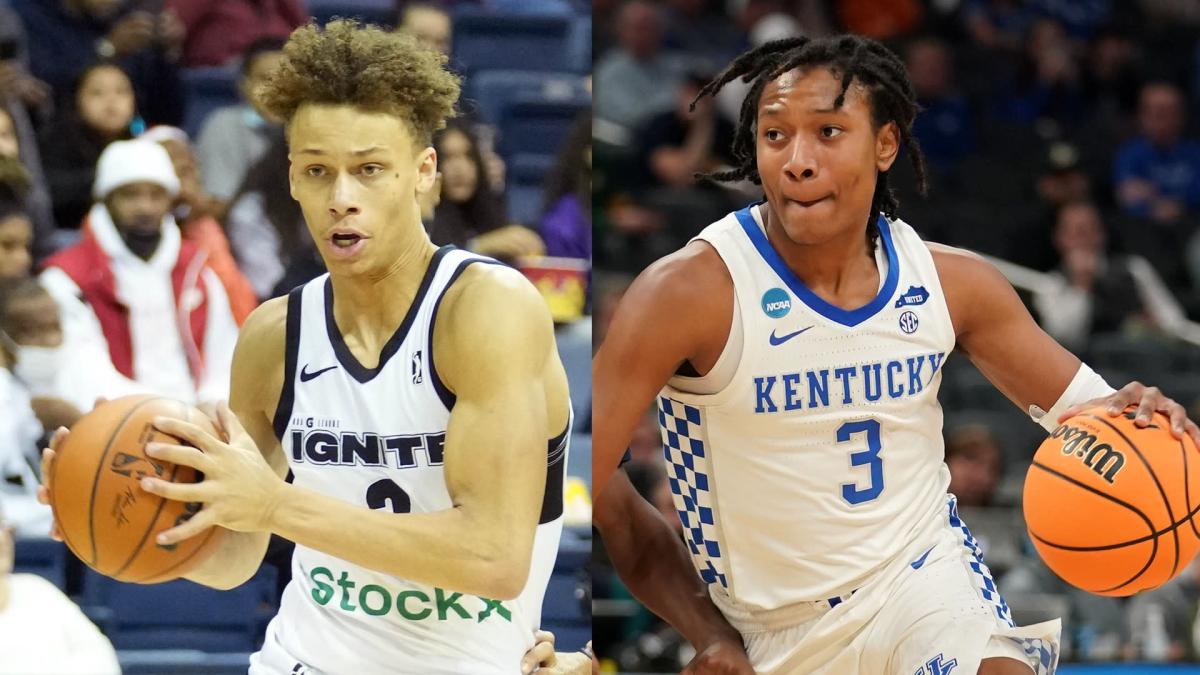 With the 10th overall pick, the Wizards may have to make a difficult choice between two players at the same position. We are going through those decisions in a series of articles, beginning with two point guards who could be on the board at 10: Dyson Daniels of the G-League Ignite and Kentucky’s TyTy Washington.

The case for Dyson Daniels

There is a ton to like about Daniels as an option for the Wizards at the 10th overall pick, if he makes it that far. He’s a point guard and the Wizards need a long-term starter at that spot. He’s also big at 6-foot-7 with a 6-foot-11 wingspan and the Wizards could use more size in their backcourt. Daniels is a creative passer, a trait the Wizards’ front office is seeking at the point guard position. He rebounds very well and the Wizards had the third-fewest rebounds by guards last season. And, most importantly, he is widely regarded for his defense. He’s a committed defender with the potential to be uniquely versatile on that end.

Whether he would be ready to start right away or not, Daniels would be an ideal point guard prospect for the Wizards. He could develop into the type of big, tough defender that would make life a lot easier for shooting guard Bradley Beal. And while he’s not a standout shooter (yet, at least), Daniels could make an impact in that regard by finding his teammates for high-percentage looks. Over time, his shooting efficiency will be a determining factor for his overall ceiling.

At a base level, he projects to be a plus-defender, rebounder and passer, the type of player who fills up the box score and is ideally suited for NBA pick-and-roll offense. In order to become a star, he will need to round out his offensive game with a more reliable outside shot.

The case for TyTy Washington

Daniels has enjoyed a good deal of momentum following the combine with some evaluators projecting him to be drafted in the top-9 and outside of the Wizards’ range. Washington, on the other hand, continues to receive mixed reviews after an up-and-down freshman year at Kentucky and is expected by most to go later in the first round, perhaps as low as the 20s. While he did have some off-nights, there are a lot of positives to his game that shine through the more you watch his film.

Washington has good size for a point guard at 6-foot-3 and also has strong court vision with obvious natural instincts that shine through on lobs and kick ahead passes. He also has better shooting percentages than Daniels (still fairly average, but better) and is a smooth finisher around the rim. Washington looks like he is going to be a good NBA player, no matter where he lands. His instincts for finding space off the dribble and scoring in traffic around the rim really stand out. He also has a knack for steals and for igniting the fastbreak.

While he doesn’t have the versatility, defensive pedigree or size of Daniels, Washington may ultimately prove to have a higher ceiling than Daniels as a scorer and playmaker. He’s a very fluid athlete who has shown flashes of being a high-level creator at the next level.

Both players have more positives than negatives and each appears destined for long and successful NBA careers. But given Daniels’ defense as a major selling point and his size for the position suggests considerable long-term upside, he seems like the more likely pick for the Wizards between the two.

See also  Jalen Green working out in Houston, focused on next step for Rockets

For a team that has made defense their utmost priority and finished 25th in defensive rating last year, it would be hard for the Wizards to pass up a defender like Daniels. He could ultimately prove to be the missing piece on that end of the floor with Kristaps Porzingis and Daniel Gafford protecting the rim and Kentavious Caldwell-Pope, Deni Avdija and Kyle Kuzma operating on the wing.

The Wizards have some defensive weapons, but desperately need a ball-stopping guard at the point of attack. Daniels could be that and much more due to his size, length and feel for the game.