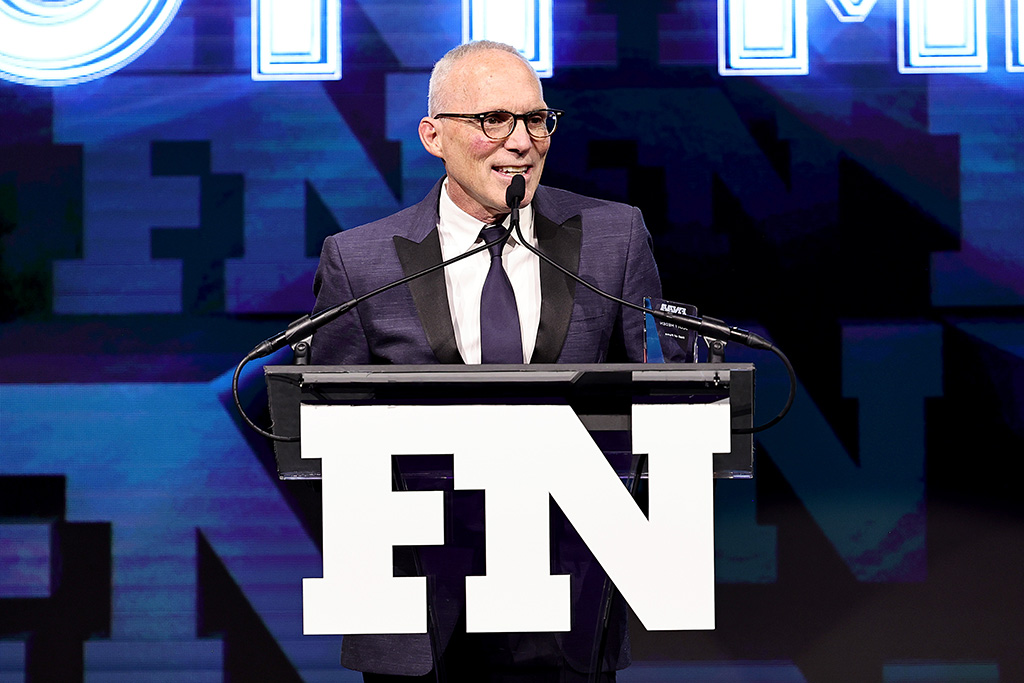 At the 2022 FN Achievement Awards Wednesday night, Nordstrom executive Scott Meden was inducted into the FNAA Hall of Fame in recognition of his storied footwear career.

Nordstrom president and chief brand officer Pete Nordstrom presented the award to Meden. “I can just tell by the love in this room that Scott must be the most popular person in the industry,” Nordstrom said.

“Scott has been with us for 37 years and started with us during college – you know, the job people take until they can find a ‘real job,’ Nordstrom joked. “But he stayed with us and embraced his role at Nordstrom. And he was good at it.”

“We grew up in the shoe business together and I’ve always known Scott as a smart man,” Nordstrom added. “He’s kind, curious, a great listener and always leads with humanity. Scott is that guy who lives with values every day in the most authentic and natural way.”

While accepting his award, Meden acknowledged the Nordstrom family for “creating a special and unique” branded business. “You have enabled me, and so many others, to live out our dreams,” Meden said. “So, thank you.”

“I believe that the shoe business is truly magical and special,” Meden added. “There is a connection that people have to shoes that’s not like any other category. This connection bleeds over into who we are as people, and everyone in this room brings this magic to life.”

Throughout his tenure at Nordstrom, Meden was fully immersed in the retailer’s shoe division. During his tenure, he supported multiple Nordstrom divisions in a variety of roles, including buyer, regional merchandiser manager, business planning and analysis director and DMM. In 2006, he was named president of Nordstrom Rack, growing the store count from 50 to 89 stores. And in 2010, he returned to the flagship banner as EVP and GMM of shoes, before being promoted to CMO in 2016.

In his nearly four decades in retail, Meden witnessed many significant footwear trends, included the skyrocketing fame of the classic Ugg boot in the early 2000s. “The team over at [Ugg parent company] Deckers was super thoughtful about growth and distribution of the boot, and that really made that launch successful,” Meden recounted in an interview with FN.

As for his proudest accomplishment, Meden pointed to two things: being a part of maintaining and developing one of Nordstrom’s core categories, and watching his coworkers grow and flourish within the company and industry. “That’s the thing that is most exciting to me,” he added.