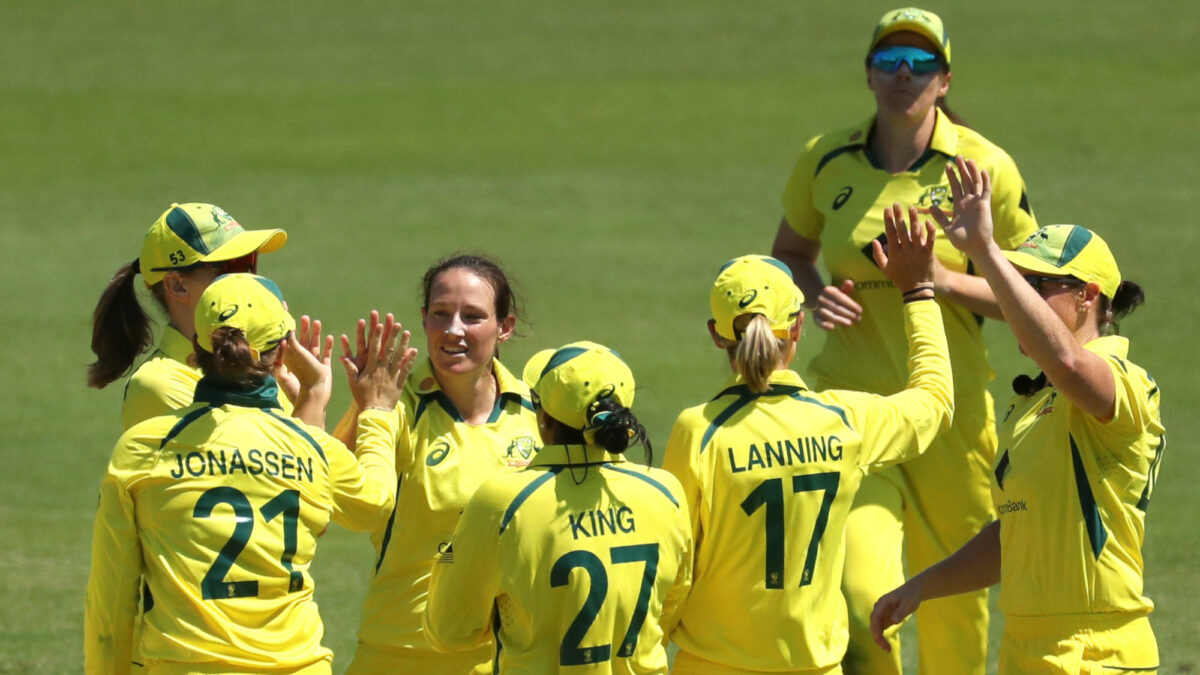 Megan Schutt has become the fourth Australian woman to take a five-wicket haul in a Twenty20 international as she helped set up her side’s eight-wicket win over Pakistan.

Schutt claimed 5-15 to help have Pakistan all out for 118, before Ellyse Perry drove and cut her way to 57 not out from 40 balls as Australia chased down the target in 13.4 overs.

Ashleigh Gardner also whacked 30 not out from 19 in the chase, as she put aside two days of headlines following her statement about January 26 to dominate the Pakistan attack.

The win marks the start of Australia’s final preparations for next month’s Twenty20 World Cup, with the three-match series the last before the tournament.

Australia couldn’t have been more dominant in the series opener at North Sydney Oval.

Schutt’s figures were the third best of all time by an Australian woman in a T20 international, as she joined Molly Strano, Jess Jonassen and Julie Hunter in taking a five-wicket haul.

The seamer got the key wicket of Bismah Mahroof when she had her caught behind down the legside on review, before Sadaf Shamas followed later in the same over.

Schutt then returned at the death to remove Pakistan’s top-scorer Omaima Sohail at mid-off for 30, along with Fatima Sana at cover and Tuba Hassan at mid-off.

Perry also claimed 2-3 from two overs to go with her runs, in her best bowling return in T20 cricket since her injury woes began in 2020.

She claimed the scalps of both openers, including a brilliant yorker to go through Javeria Khan on 16 and take her middle stump.

Perry was dropped from Australia’s T20 team last January, and a squeeze looms in the middle order, with Alyssa Healy set to return from a calf injury at the top.

But after a big series in India last month with the bat, Perry is making an insurmountable case to be in Australia’s first-choice XI for the World Cup.

Asked to open as Beth Mooney battled soreness after long stints in the middle, Perry hit seven boundaries and pulled a bouncer from quick Fatima Sana for six over mid-on.

Alana King (2-16) provided the other highlight of the day for Australia with a superb one-handed caught-and-bowled after Nida Dar hit a full-blooded drive back at her.

The leg-spinner also bowled Ayesha Naseem for 24 after the right-hander had slog-swept her for six and also dispatched Darcie Brown over midwicket with a powerful pull shot.