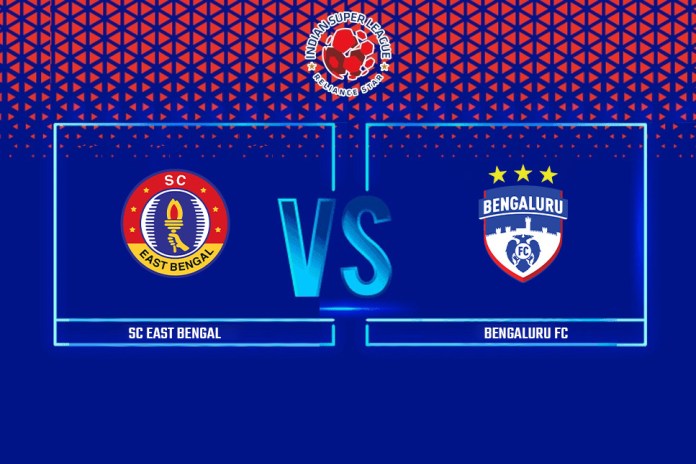 SCEB vs BFC: SC East Bengal and Bengaluru FC will both look to finish the season on a high after underwhelming campaigns in different ways for the two sides when they meet in the Hero Indian Super League at the Tilak Maidan Stadium on Saturday. Follow all the ISL 2021-22 LIVE Updates only on InsideSport.IN

SC East Bengal will finish at the bottom even if they beat Bengaluru FC owing to an inferior head-to-head record against NorthEast United FC who are placed a rung above them. This has been a season to forget for the red and gold brigade who have once again failed to deliver the goods this season like their first one in the Hero ISL, leaving their huge number of fans high and dry.

The Kolkata club have managed to win just one game so far, managing only 11 points from 19 matches to remain at the foot of the table for most parts of the season.

“If we check the results in my tenure, it’s not good, but if one looks at the matches, the improvement is there for all to see. We grew more confident with the ball, the ability to string passes together increased, and we created many chances,” said head coach Mario Rivera ahead of the fixture. Rivera took charge midway after Jose Manuel Diaz parted ways and Renedy Singh finished his time as interim coach.

“I will look to provide some game time to the young players tomorrow. They have been training well and deserve some minutes,” he added.

Nepal defender Ananta Tamang, who joined SC East Bengal in the January transfer window to fill the Asian quota left empty by Tomislav Mrcela, could be seen in action on Saturday.

“Ananta Tamang will be on the team list, it remains to be seen whether he will get game time. It is never easy for anyone to play after being in quarantine for so long but he is a good player with a positive attitude,” Rivera said.

For Bengaluru, a sixth-place finish looks likely but a second straight season without finishing in the top-four is not something the former champions aim for. They were in the hunt before their last outing where they lost to ATK Mohun Bagan to bow out of the semifinal race. The Blues have 26 points from 19 matches.

“We’ve done a lot of good things, but the important thing was to reach the top four which we couldn’t. We developed young players, players who didn’t play last season, and we’ve changed our playing style.

“In the end, as BFC, we want to reach the top four, which is disappointing. But we have more points than last season, but at the end, when the opponent comes to you and tell you that they don’t know how to play against us, it means something,” said Blues’ head coach Marco Pezzaiuoli. The last time the two teams met, the game ended in a 1-1 stalemate.

Matches between SC East Bengal and Odisha FC have always been close affairs in the Indian Super League. Both teams have faced each other in three matches out of which both teams have come out with one victory whereas the other game ended in stalemate. So nothing to separate the two sides till now after three matches and hopefully the fourth game will also live up to the expectations.

The first leg of this fixture this season ended 1-1 draw as Bengaluru FC and SC East Bengal shared the spoils.