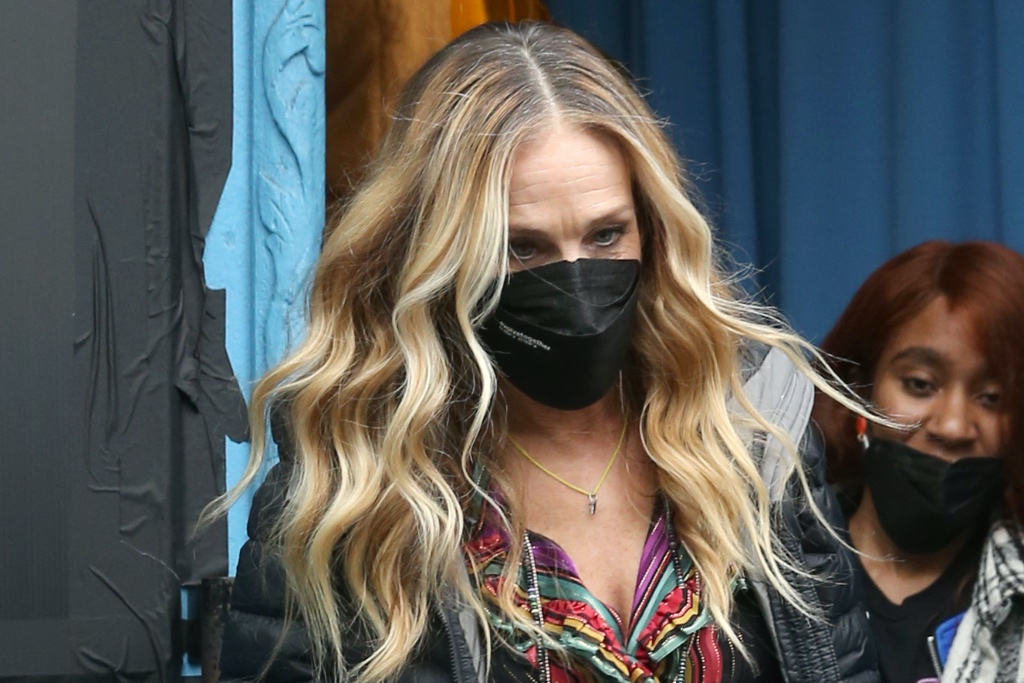 On Monday afternoon, Parker — as Bradshaw — was spotted leaving a boutique after completing a scene for the HBO Max comedy’s second season. For the occasion, she wore a bright ensemble by costume designers Molly Rogers and Danny Santiago: a multicolored striped blouse, featuring miniature metallic gold stripes and a ruffled neckline, paired with an orchid purple midi skirt covered in gleaming sequins.

Adding to the paillette-coated piece’s slick nature was a column fit, as well as a tall slit ruched on each side. The ensemble was finished with an eclectic layer of necklaces — a string of multicolored and black beads, a metallic beaded necklace and a neon yellow chain string with a delicate crystal. Completing the look were triangular stud earrings, featuring purple crystals that matched Parker’s skirt.

Parker added her own practical wardrobe elements to brave the fall chill while entering her car: a long black puffer coat and two canvas tote bags, one of them endorsing Tim Ryan as Senator for the current Ohio Senate race. She also wore a black KN95 mask by EvolveTogether, a protective 6-ply face covering with thin side straps; the same mask is sold in sets of 5 for $15 on the brand’s website.

When it came to footwear, Parker slipped into a set of metallic magenta Giuseppe Zanotti. sandals Her sold-out Sophie pair featured thin toe and buckled slingback straps, as well as thin platform soles. Giving the style a slick finish were stiletto heels totaling at least 4 inches in height, adding a tonal pop of color against her purple skirt. Though her exact pair is now sold out, other similarly strappy sandals are available on Zanotti’s website.

It’s worth noting that Parker’s ensemble is her second publicly seen while wearing the same shoes — a common theme throughout the first season of “And Just Like That…,” adding to the realistic nature of re-wearing beloved pieces over time. Her Zanotti’s were first spotted when filming a scene in a vintage magenta belted dress and woven Bottega Veneta bag near Bryant Park on Oct. 10.

Parker’s outfit is her latest public ensemble as Bradshaw from the dramatic comedy show’s second season, which has begun filming throughout New York City this month. Her first — which went instantly viral — featured archival 2008 Dior Extreme Gladiator sandals and a zippered cargo jumpsuit, paired with J.W. Anderson’s pigeon-shaped clutch. As for what Carrie and co. will wear in the rest of season 2? We [can’t] help but wonder…though all will surely be revealed when filming continues in Manhattan this fall.

PHOTOS: Discover celebrities arriving at the “And Just Like That…” season 1 premiere.