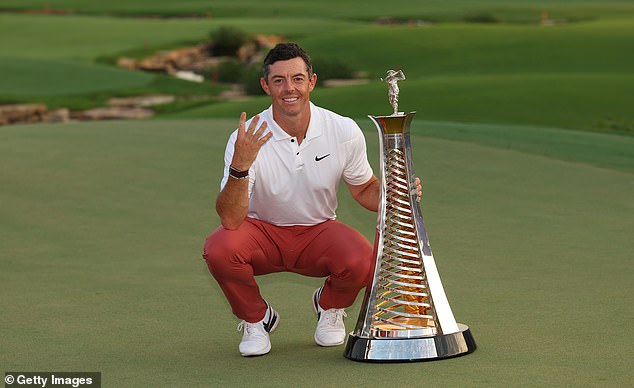 One out of two will have to do. To judge from Rory McIlroy’s words and demeanour after he made a slice of history in Dubai on Sunday night, it will do just fine.

He fell short in the more immediate goal of winning the DP World Tour Championship – that went to Jon Rahm, with McIlroy fourth – but in the wider scheme of the European order of merit, the world No 1 was able to outrun Matt Fitzpatrick to top the list for a fourth time.

With it, he concluded his season with the points crown for both the PGA and DP Tours, as well as his place at the top of the world rankings. Such a hat-trick has never before been achieved, even if there remains a nagging shortcoming in such a strong body of work.

The clock has ticked for more than eight years since McIlroy’s last major, but no player in golf’s confused landscape will carry more momentum into the next.

Of course, we are familiar with false dawns in McIlroy’s career, but it is informative to consider his results since he missed a cut in Texas in March: in 16 tournaments, including strong showings at each major, he has won three and recorded a further eight top-five finishes, alongside a coal-face role in the political war with the LIV tour. Optimism for that long-awaited fifth major in 2023 would be well placed.

‘It seems like it’s a long time since the Texas Open when I was sort of struggling a little bit and made a couple of tweaks with my game – that was where my year turned,’ he said. 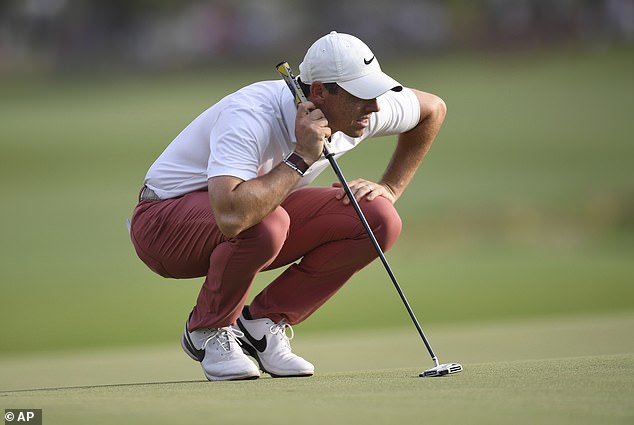 But the 33-year-old was unable to clinch glory in the DP World Tour Championship, finishing fourth

‘I don’t think I have played as consistently in my entire career as I’m doing right now. It’s been a fantastic year both sides of the pond.

‘I probably sound like a broken record but it’s been eight years since I won a major. I feel like I’ve done everything else in the game since then, so all I can do is keep my head down, work hard and play the way I have been playing. I’ve been really encouraged with how I’ve played this year in the majors and that’s something to really build on for next year.’

McIlroy’s prospects of winning this tournament outright were limited after an underwhelming first round of 71, but subsequent scores of 65 and 67 had opened a door. Starting the last loop three back of Rahm, his chances were reduced when the Spaniard birdied each of the first three holes and the world No 5 would soon charge off to a 67, closing on 20 under par. 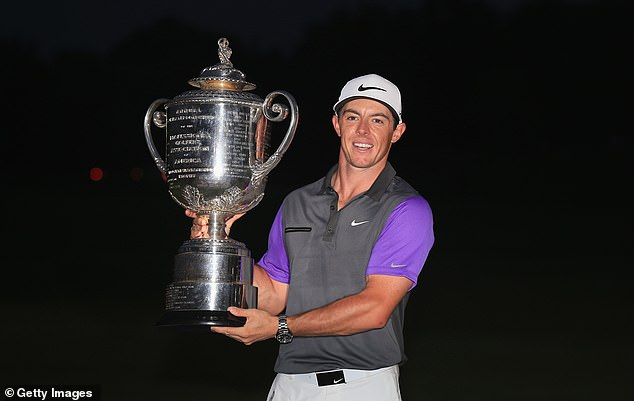 After a strong season, there remains considerable optimism that McIlroy can finally clinch his fifth major next year

‘Hopefully people can stop telling me that it was a bad year,’ Rahm said. ‘Three wins in three different continents, so yeah, it wasn’t a major, but it’s still a really, really good season.’

McIlroy’s 68, achieved despite a few recurring issues with his driver, had him four back, with Tyrrell Hatton an impressive runner-up to Rahm on 18 under.

For Fitzpatrick, there might be an element of regret at the close of a stunning season in which he won the US Open. He led the tournament here after two rounds and had created the possibility of robbing McIlroy of an order-of-merit position he had held since July. But the Englishman’s closing 73 killed off his chances on both fronts.