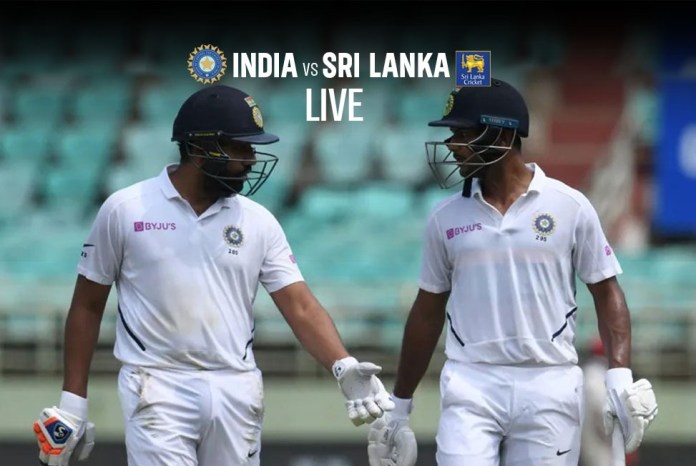 IND vs SL LIVE score, 1st test: India opt to bat against Sri Lanka Rohit Sharma has made a fascinating start to his captaincy career with the coin toss falling his way. He has opted to bat and set a big score for visitors. He will look to repeat the white-ball heroics in the red-ball matches and ensure India gives a fitting present to Virat Kohli in his landmark 100th Test. Both teams will square off on Friday in the opening match of the two-Test series which will be played at the PCA IS Bindra Stadium in Mohali. Follow India vs Sri Lanka LIVE score updates on InsideSport.IN

Speaking at the toss, India skipper Rohit Sharma said, “We are going to bat first. Similar Indian conditions, so it’s important for us to put runs on the board and take it from there. It is a huge honour to be captaining India and be part of the list. It is something I never dreamt of. It has been quite buzzing. We know it is a special occasion. Not many people go on to play 100 Tests, and Virat has been looking forward to this game. We are playing three seamers and two spinners.”

On the other hand, Sri Lanka skipper Dimuth Karunaratne said, “We wanted to bat first as well. We are playing three seamers, but it is a good wicket to bat on. We have played 300 Tests but we never won in India. We have a good team, with the senior and junior combinations and we are prepared. We are going in with three seamers and two spinners.”

Hanuma Vihari had scored unbeaten 40 and 20 in SA Test on his comeback after the triple fifties for India A. He had recently featured in Ranji Trophy for Hyderabad against Chandigarh and slammed a century and fifty in the same match.

Captain Rohit Sharma wins the toss and elects to bat first in the 1st Test.

A look at our Playing XI for the game.

Welcome to the live coverage of the 1ST TEST between India and Sri Lanka. https://t.co/XaUgOQVg3O #INDvSL @Paytm

Team India are currently ranked second in ICC Test Rankings. They are only 1 point behind Australia. A whitewash can help India take the pole position subject to Australia’s performances against Pakistan in the upcoming 3-match Test series. If India will win 2-0 then they will add 10 points but Australia can play spoilsport.

After taking white-ball captaincy by storm with a back-to-back whitewash against West Indies & Sri Lanka, he will kick start his Test captaincy against SL at Mohali. He will look to win his first series as red-ball captain against minnows.

With Cheteshwar Pujara & Ajinkya Rahane, Team India is expected to enter a new era. The likes of Ishant Sharma & Wriddhiman Saha have been also ruled out of the tournament. Shreyas Iyer and Shubman Gill are expected to play the role of India’s new middle order.

The legendary Sunil Gavaskar takes us through the run of emotions that @imVkohli could feel ahead of his 1⃣0⃣0⃣th Test. 🙌🙌 #VK100 pic.twitter.com/bzsh44xHXm

6 AM: We are just hours from Toss ahead of the opening Test. Toss coming your way at 9 AM.

For hosts, youngsters like Shubman Gill and Hanuma Vihari are likely to be long term replacements of senior players like Ajinkya Rahane and Cheteshwar Pujara along with Shreyas Iyer as backup middle-order batter. Both the senior players were omitted from the squad after the poor show with the bat.

Dangerous batter Rishabh Pant might be playing at No.5 replacing Ajinkya Rahane who was a primarily middle-order player. Right now India has a solid batting lineup with players like Rohit Sharma, Virat Kohli, Rishabh Pant, Shubman Gill and Hanuma Vihari. So, it will be difficult for the team management and skipper to drop any aforementioned player for the opening Test match.

After the devastating multi-series loss against South Africa, Indian pacers Mohammad Siraj, Jasprit Bumrah and Mohammed Shami will be eager to be in form for the series against the lions. Against Proteas, Indian pacers failed to make an impact in the last two Tests and now against their sub-continental neighbours, they would like to be at their best at home.

The guests who have suffered a clean sweep against the hosts in the T20Is will look to have their say in the longest format of the game. Sri Lanka captain Dimuth Karunaratne would hope that his team’s batting and bowling lineup will do well so they don’t have to go through another whitewash.

The Lanka team is hanging on their spinners for success but the slow bowling might not work against the Indian batting attack.

India also possesses the top spinners. It will be hard for Sri Lanka’s batters to face Ravichandran Ashwin and Ravindra Jadeja. Skipper Dasun Shanaka would hope that his team get their act together and be able to give a fight to hosts.

For more sports news and India vs Sri Lanka LIVE score updates, follow us at InsideSport.IN