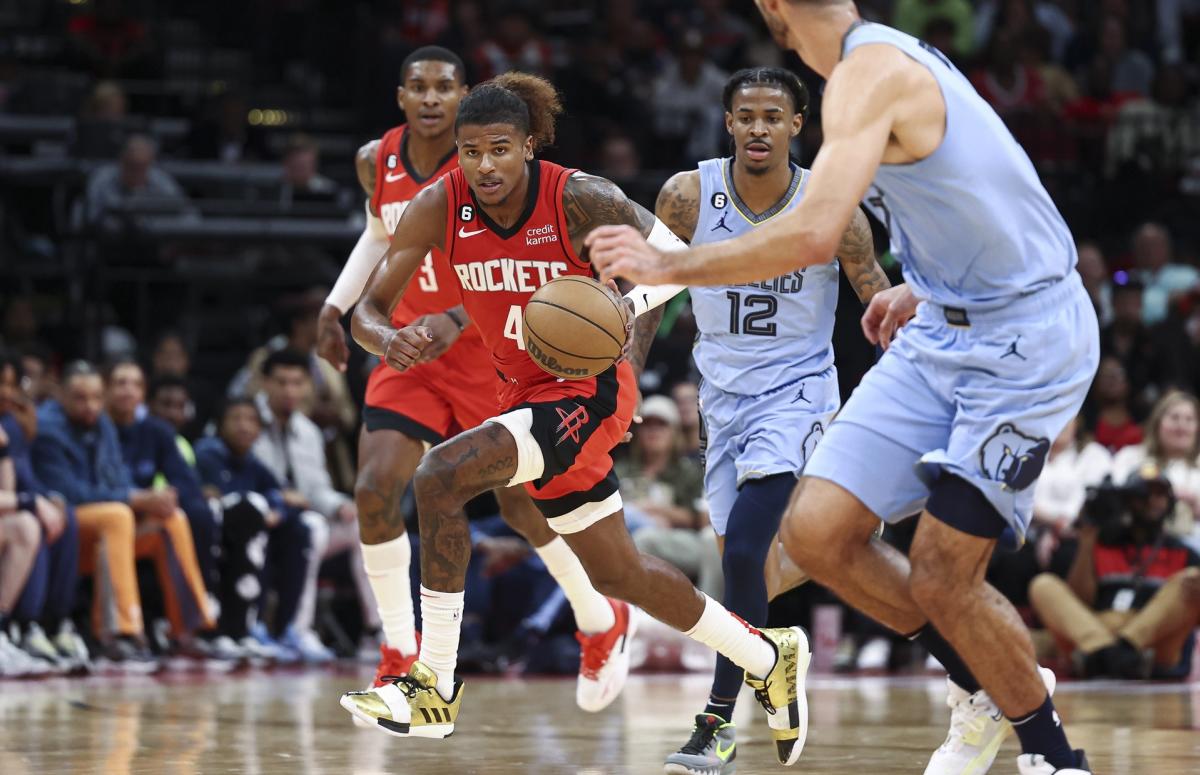 HOUSTON — When Memphis Grizzlies superstar guard Ja Morant took the floor Friday at Toyota Center, everyone was well aware of the acrobatic, high-flyer who has been on numerous NBA highlights due to his excellent shot-making and leaping ability.

Some would say that had he not suffered a knee injury in Game 3 of the 2021 NBA Western Conference semifinals versus the Golden State Warriors — a series where he was averaging 38.3 points per game — he might have been able to lead Memphis to the NBA Finals.

So, when the fans inside of Toyota Center sat in their seats on Friday for the Houston Rockets home opener, they knew what to expect from Morant and expected him to do it early and often.

With 49 points and 8 assists, Morant did not disappoint.

Yet, the home fans got a glimpse of their own team’s future, as well, as second-year guard Jalen Green put on a dazzling performance in the first quarter with 14 points on 5-for-8 shooting (62.5%). Ultimately, the 20-yar-old finished with a team-high 33 points.

Green consistently attacked the paint, and when Memphis put multiple players in the lane to stop him, he showed off his improved 3-point shot by making 4-of-5 on the night (80.0%). The 2021-22 NBA All-Rookie First Team selection scored 30 or more points eight times as a rookie, including seven over the final 17 games.

“Jalen was great,” said Rockets head coach Stephen Silas. “He was so good. He was efficient by going 13-for-21 (shooting). We want him to be around that 20-shot range, and he was. He was getting downhill and getting into the paint. The defensive job that he had to do at times on Ja (Morant) wears him out. I was super proud of what he did.”

Green recovered from a dismal 35% shooting night in Atlanta during Wednesday’s opener to hit 61.9% of his shots in 35 minutes of action. It may have been that he knew that he was looking into a mirror when he was matched up with the high-flying Morant.

During his postgame press conference, Green gave credit to Morant and the effort he put in to get his team the win, but also elaborated that he embraces the challenge in working to elevate his own game to where 2021-22 All-NBA Second Team guard currently is.

Memphis head coach Taylor Jenkins said he believes Green has potential to be in that same conversation as his own superstar guard.

“He has a huge spark when he plays,” Jenkins said pregame. “The way he can break down defenses and the pace he plays at, he is another one of those guys that you can put up there as one of the fastest players in the league.”

“From one end of the floor to the other, but also in the halfcourt how he can change directions so quickly, just makes it so hard on the defense. When he can break down the defense, he can go either direction with the way he can get into the paint. He has put in a lot of work on the 3-point shot and is trying to become more of a playmaker for them. I definitely see a lot of growth in his game.”

An area of growth that Green worked on in the offseason was his ability to process the tough times he will go through this season as the Rockets continue to rebuild with such a young team.

“One thing that we have been preaching, me and my training staff, is that there are no losses with this team,” Green said when asked about the team’s maturation. “We are all in a rebuild right now. It is either a win or a learning lesson. So, tonight was a learning lesson.”

Podcast: Will Jalen Green be a winning player? Matt Moore dives in