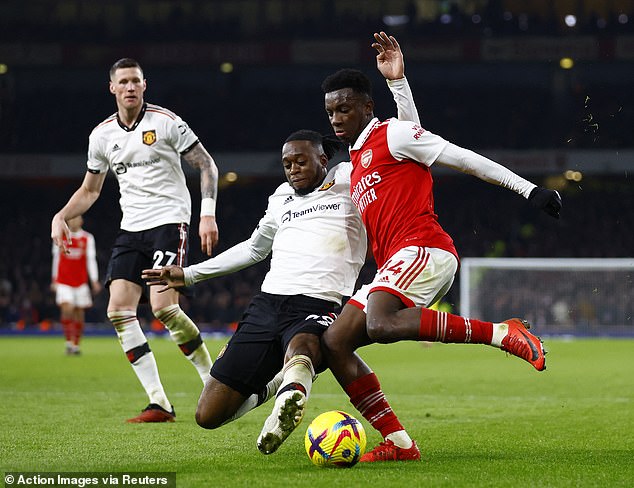 Rio Ferdinand has defended Manchester United right-back Aaron Wan-Bissaka following criticism from Roy Keane over his ‘lack of awareness’ in their 3-2 defeat to Arsenal on Sunday.

Eddie Nketiah notched a brace to add to Bukayo Saka’s solo effort for the Gunners to keep them clear at the top of the Premier League table – despite goals from United’s Marcus Rashford and Lisandro Martinez.

Nketiah brushed past Wan-Bissaka at the far post to nod home in the 24th minute for Arsenal’s first goal – which led to intense criticism from former United midfielder Keane.

Ferdinand, however, has rushed to the former Crystal Palace defender’s defence by insisting it’s not an easy skill to read which side to mark an opposing player.

On his Vibe with Five Podcast, Ferdinand said: ‘Gary Neville was the best at this as a full-back, he was the best at marking the opposite side when the ball was coming in so if their winger was crossing the ball, the Gary Neville gets himself inside the post so that anything that beats me, he’s going to get.

‘But also he’s going to attach himself to that winger, get hold of them. Sometimes he’s not as big as those guys but they’ve got to do a lot to get away from them and he would just stand in their way. 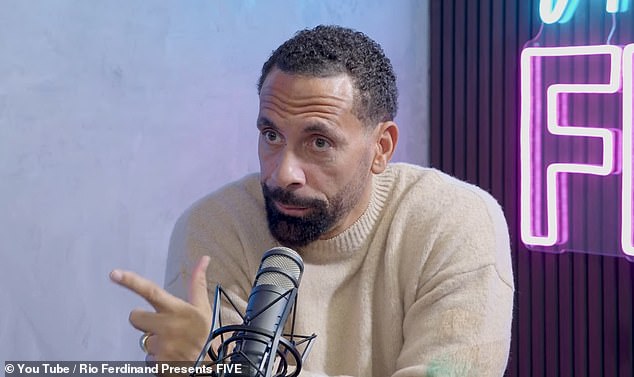 ‘This [the Arsenal goal] is all about awareness and seeing that bigger picture and that comes from reps in training.

‘For Aaron Wan-Bissaka, and all full-backs, it’s a really hard skill to master by the way. The way the guys were talking about it yesterday was like it was easy. It’s not easy.

‘That is one way that 33-year-olds get unpicked at the end of their career when they are meant to know it back to front.

‘It’s about being switched on and having concentration for the full 90. If you switch off in those moments, you get punished because you’re six yards out so it’s a goal.

‘He has to attach himself. Feel him. Or he has got to turn and face, but that is the hardest thing to do, to do that and see the crosser and the man.

‘You can’t turn your back like he did. When you do that, you have got no idea where he is. He didn’t know where he was.’ 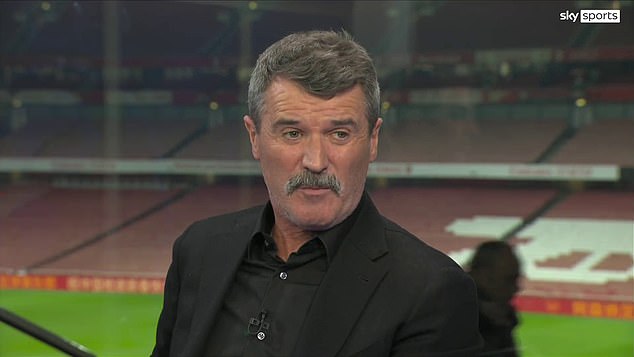 The former United defender’s comments come off the back of Keane slamming Wan-Bissaka for his lack of awareness in the build-up to the Gunners first goal following the match.

‘It’s just his lack of awareness. It’s as if he can’t believe someone’s coming around the back of him, because he can see him, he just dozes off,’ Keane said on Sky Sports commentary.

‘A silly lack of concentration, considering we praise him saying he’s a good defender. Of course he sees him. You have to be aware of him, that’s his job, this is big boy stuff and these are big moments. Do your job, go and attack the ball.’