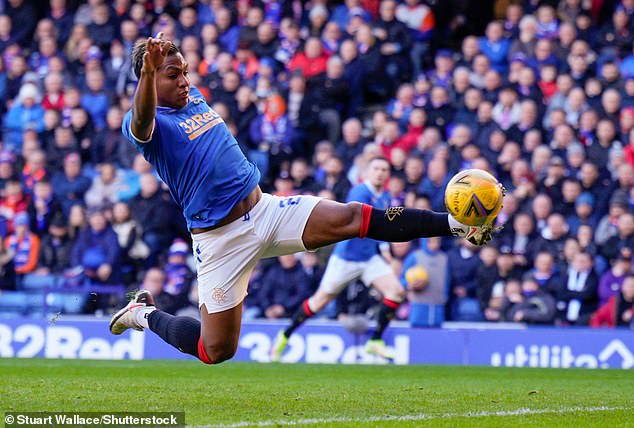 When the high of defeating Borussia Dortmund was followed by Celtic’s first dropped points of 2022, it felt as though the stars were aligning for Rangers.

This was an opportunity to move onto the shoulder of their title rivals. And to regain domestic momentum. It was one they surely couldn’t pass up.

Two goals ahead after 24 minutes of complete dominance, the prospect of another Premiership slip appeared all the more unthinkable. But then Giovanni van Bronckhorst’s side are nothing if not unpredictable.

Alfredo Morelos gave Rangers the lead after 22 minutes, before setting up Fashion Sakala

Their control of the game eroded. Revitalised by a half-time triple change, Motherwell clawed one back through substitute Jordan Roberts and a cloud of tension slowly spread its way across Ibrox.

Rangers sought a reaction but it was more frantic now. Alfredo Morelos twice had efforts ruled out for offside and a way to kill off the game wasn’t found.

That mattered come the 77th minute. Capitalising on some flimsy defending, Kaiyne Woolery completed a comeback that had seemed the longest of long shots at the interval.

Pointing to an offside in the build-up, Van Bronckhorst aired a grievance about the officials and the absence of VAR in his after-match assessment.

But the burst of booing heard at the final whistle was aimed at more than referee Don Robertson and his assistants. It spoke of the immense frustration felt inside Ibrox. The scoreline might have matched last Thursday night, but this was a million miles away from the glory against Dortmund. A winning position was thrown away.

Eleven points have now been dropped in eight Premiership since the winter break. Rangers remain three behind Celtic at the summit. Plainly, they cannot afford to keep letting these chances slip away if they are to retain their title.

While Motherwell remain without a league win in 2022, this would have felt like a triumph for Graham Alexander and his players.

The emotions in the Rangers dressing room were very different. Van Bronckhorst had emphasised the importance of taking the confidence from the Europa League into their domestic business. News of Celtic drawing at Easter Road then offered more enticement, but this became a bruising affair.

With a trip to St Johnstone on Wednesday night followed by a visit from Aberdeen, Van Bronckhorst’s men badly need to post back-to-back wins before resuming their continental adventure against Red Star Belgrade.

The Dutchman so much right in midweek, yet here some decisions were questioned. John Lundstram was asked to continue in central defence rather than Calvin Bassey moving infield and Borna Barisic being picked at left-back. 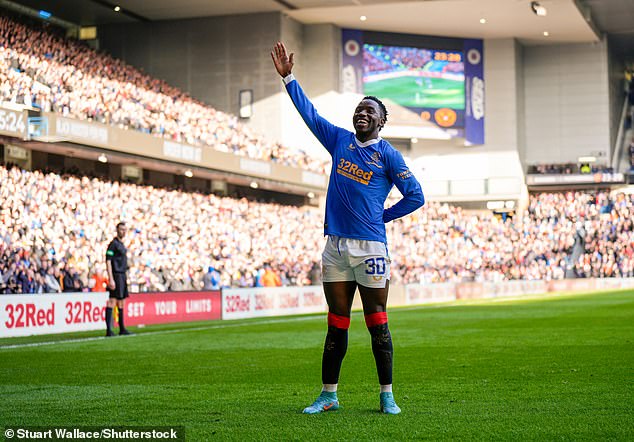 Sakala’s goal put Rangers in control, but they let their lead slip in the second half at Ibrox

Lundstram was exposed for pace at Motherwell’s first goal, but it would be harsh to point too many fingers at the Englishman when more established defensive colleagues were culpable at the second.

It was also puzzling, with Rangers fading in the second period after the exertions against Dortmund, that Van Bronckhorst waited until 83 minutes to make a substitution.

He defended the mentality of his side afterwards but clearly the Ibrox outfit need to answer where it counts by posting consistent domestic results.

They started this one in ebullient mood and were almost in front inside 90 seconds when Morelos clipped the frame of the goal.

James Tavernier sought to curl one beyond Liam Kelly from an angle outside the area, only for the goalkeeper to tip it away. Lundstram then glanced a header wide from a Tavernier delivery before testing Kelly with an excellent strike. 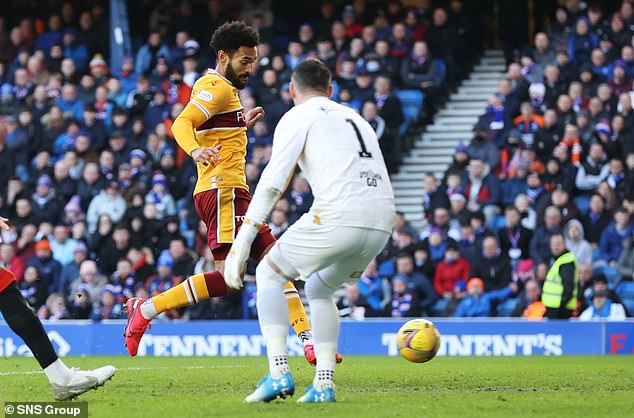 Motherwell’s no.1 was earning his money. Yet even he couldn’t prevent a deficit in the 22nd minute.

Rangers had been racked up the corners. When their sixth was cleared, they kept the pressure on.

Ryan Kent gathered on the right and fizzed in a cross that Morelos and Bevis Mugabi both attacked. The ball flew inside Kelly’s right -hand post to give Rangers the lead. Less clear was who’d had the final touch.

A somewhat restrained celebration from Morelos suggested it might have been the shoulder of Mugabi. A jubilant Ibrox crowd didn’t much care. It became all the more academic when the home side doubled their advantage two minutes later.

Again, Kent was involved. Driving down the left, he dinked in a cross that was helped on by Morelos. Fashion Sakala arrived at the far post to smash home.

How the Zambian loves playing Motherwell. Five of his nine Rangers goals have come against them.

Still serving a touchline ban, Alexander had opted for five changes to the side which drew 1-1 against Aberdeen eight days previously. 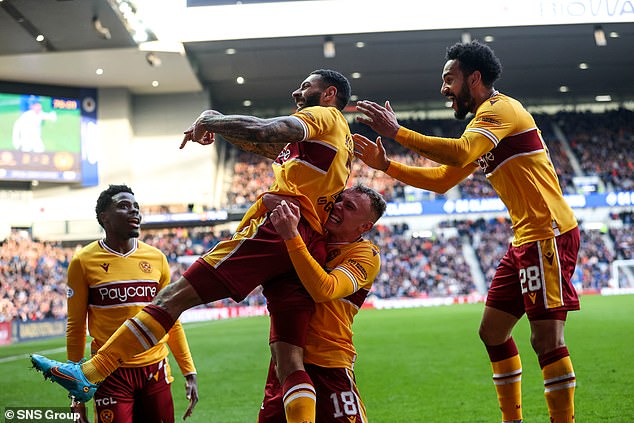 Kevin van Veen played through the majority of that match with a shoulder injury and was the only enforced absence among those dropping out. Clearly, a different approach was being sought. But it wasn’t working.

Alexander’s answer was a triple half-time substitution. Off went Mark O’Hara, Ross Tierney and Joe Efford. On came Roberts, Liam Shaw and Justin Amaluzor. Within seven minutes of the restart, they had one back.

Woolery produced a terrific burst of pace to surge away from Lundstram before delivering the perfect low ball for Roberts. His fellow winger was left with a tap-in.

Now it was game on. Morelos thought he’d rapidly restored Rangers’ two-goal lead when heading a Kent cross, but was flagged offside. A show of dissent towards assistant referee Frank Connor earned the striker a booking.

Morelos was more restrained when Connor’s flag denied him a second time on 67 minutes, on this occasion after a crisp finish. It looked a tight call. 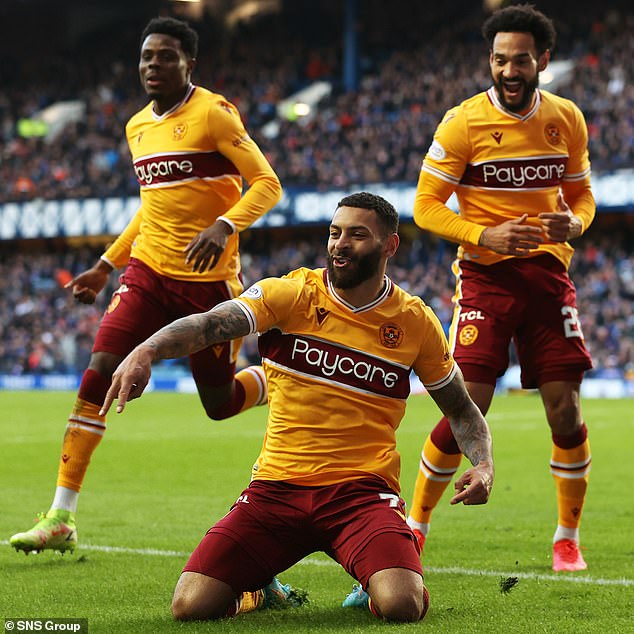 Rangers continued to push forward but there was more raggedness about their play as the frustration inside Ibrox rose. It was cranked up to a whole new level when Motherwell equalised.

The visitors played on when there was no offside against Shaw. They managed to work it forward again, with Woolery getting onto a bouncing ball. He twisted through ineffective challenges from Goldson and Tavernier before poking a left-foot shot beyond McGregor. The goalkeeper should have done better.

Ibrox substitute Kemar Roofe then shot straight at Kelly, with Rangers then hollering for a penalty before Goldson poked into the goalkeeper’s hands. By then, the game was up.