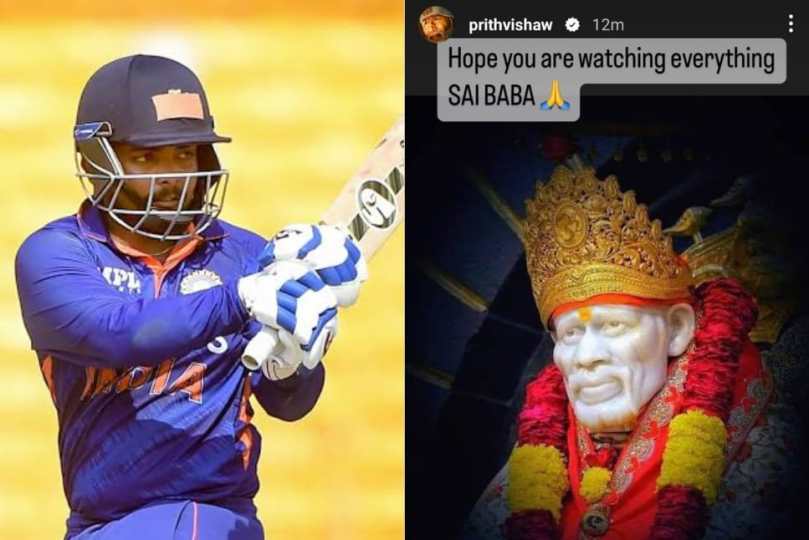 India Squad NZ Series: Prithvi Shaw Snub – India youngster batter Prithvi Shaw was left extremely disheartened after he got the snub from the New Zealand series. The opener took to social media to post a Cryptic message which clearly means that he didn’t take his exclusion from the team very lightly. However, Chief Selector Chetan Sharma ensured that Shaw will get his chance very soon. Follow India vs New Zealand LIVE Updates on InsideSport.IN

Virat Kohli Privacy Breach: Virat Kohli slams a fan for intruding on his personal privacy in a hotel room, asks fans to not treat him as a commodity for entertainment – Watch Video

Prithvi Shaw not only found his name missing from the India squad for New Zealand, but also from the India Tour of Bangladesh list. Left heartbroken and disappointed after failing to get his spot in the National team, Shaw took to social media where he posted, “Hope you are watching everything Sai Baba,”

Prithvi Shaw has been out of the India team for over a year. He last played for his country back in 2021 when India toured Sri Lanka. However, as for his future, the BCCI Selectors will take their time and give him the chances, but it can be expected that the Mumbai batter will take to wait before making it to the team.

“Selectors are in constant touch with Prithvi Shaw. He will get his due. Right now we need to give chances to the current people in the fray,” said Chetan Sharma in a virtual press conference.

We must be the greatest cricket playing nation ever if Prithvi Shaw is not good enough to get into an India squad in any of the formats, leave alone make the XI!

See also  PBKS vs CSK: Revealed - What Rishi Dhawan Is Wearing On His Face During Today's Match

After being out of the national team, Shaw took all his chances in the domestic format and has played extremely well. He continues his good form in the Syed Mushtaq Ali Trophy. He slammed a fiery 134 run knock off just 61 deliveries which was his maiden century against Assam.

The young batter had a decent stint with the Delhi Capitals in the last IPL season, i.e IPL 2022 and will be eager to showcase the best of his talent in the upcoming IPL 2023 season.