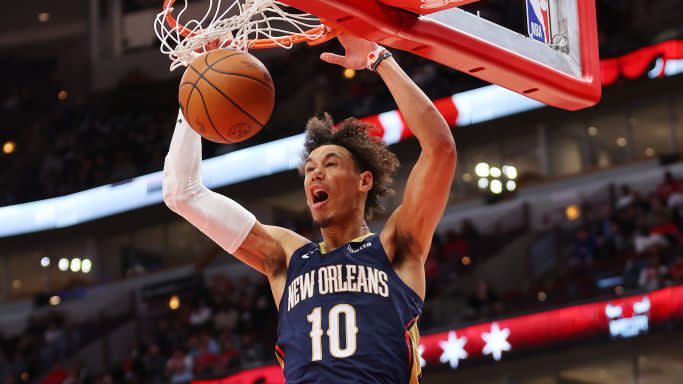 Pelicans backup big man Jaxson Hayes is out for at least a couple of weeks with a torn ulnar collateral ligament (UCL) in his left elbow, the team announced.

The injury occurred during a preseason game against the Pistons. The Pelicans say Hayes will be re-evaluated in two weeks, but expect a more prolonged absence. While this is his off-arm, history suggests it will take longer for Hayes to bounce back from this, something Jeff Stotts points out at In Street Clothes.

Sports fans recognize a torn ulnar collateral ligament as the first step to Tommy John surgery in baseball pitchers, but it does not require that same treatment to play in the NBA. However, it takes time to heal.

Hayes provides an athletic spark off the bench behind Zion Williamson and Jonas Valančiūnas in New Orleans, averaging 9.3 points and 4.5 assists a game in 20 minutes a night for New Orleans last season. He’s a solid reserve who can block shots and is an efficient scorer (68 True Shooting Percentage last season), plus is a good finisher in transition. He also remains on probation from a domestic violence arrest in 2021 and a scuffle with police.

Hayes is headed to a contract year. Unless he and the Pelicans agree to an extension by Oct. 18, he will be a restricted free agent next summer.

Check out more on the Pelicans