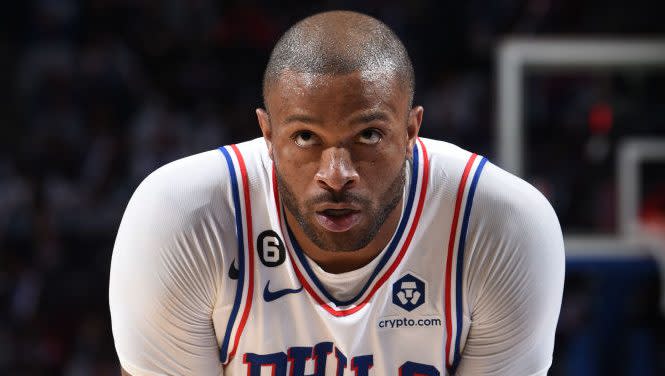 After dropping their first two games to the two Eastern Conference favorites — the Bucks and Celtics — the 76ers played Saturday night like a team that thought it could coast to a home win over a Spurs squad on the second night of a back-to-back. But take a Gregg Popovich coached team lightly at your own risk — the Spurs controlled the game most of the way, getting the 114-105 win and dropping the 76ers to 0-3.

After the game in the locker room, P.J. Tucker lit into his new teammates, coach Doc Rivers said (via Noah Levick of NBC Sports Philadelphia).

“It’s almost like we played these first two games hard, competed, and then felt like, ‘OK, now we can win some games.’ You’ve still got to go out and earn the game. Tuck was yelling that after the game, and he was right. No one’s just going to give you a win. You have to go get it — and you have to do it a lot. Every night. You can’t pick and choose when you’re going to show up. And right now that’s what we’re doing.”

When Keith Pompey of the Philadelphia Inquirer asked what has gone wrong, James Harden answered, “everything.”

Not everything, Joel Embiid had his best game of the season with 40 points and 13 rebounds against San Antonio. However, he and James Harden seem to be taking turns more than playing off each other this young season.

The lengthy list of Philly concerns to start the season begins with the defense. While it’s early, the bottom 10 76ers defense is not getting stops, not creating turnovers, and with that not letting the 76ers get out and run a little, creating easy buckets (the 76ers are playing at the slowest pace in the league so far). The 76ers defense was always going to be a challenge with a backcourt of Tyrese Maxey and Harden, but with Embiid being a step slow to start the season, he’s not able to cover up those deficiencies the same way.

“Today, lack of defensive effort,” Tobias Harris said. “We do have to give them credit, they made tough shots. But on our part, that’s not the standard of defense that we hold ourselves to. The second quarter, 35 points for them. Third quarter, 31. Our standard is 25 or less. That’s not how we know we can defend.”

See also  What is the ceiling of the Boston Celtics this season?

The other standout problem has been the supposedly improved bench — it scored just 10 points against San Antonio, after 13 against the Bucks and 11 against the Celtics. Montrezl Harrell didn’t get a shot off against the Spurs, while DeAnthony Melton missed the three he took.

There’s a long season to go and the 76ers have too much talent to struggle for long, but this was not the start Philly fans expected.

The 76ers are at home Monday against the Pacers, then head out on the road for four games against other Eastern foes, including two games in Toronto.

P.J. Tucker yells at 76ers after loss to Spurs drops them to 0-3 originally appeared on NBCSports.com