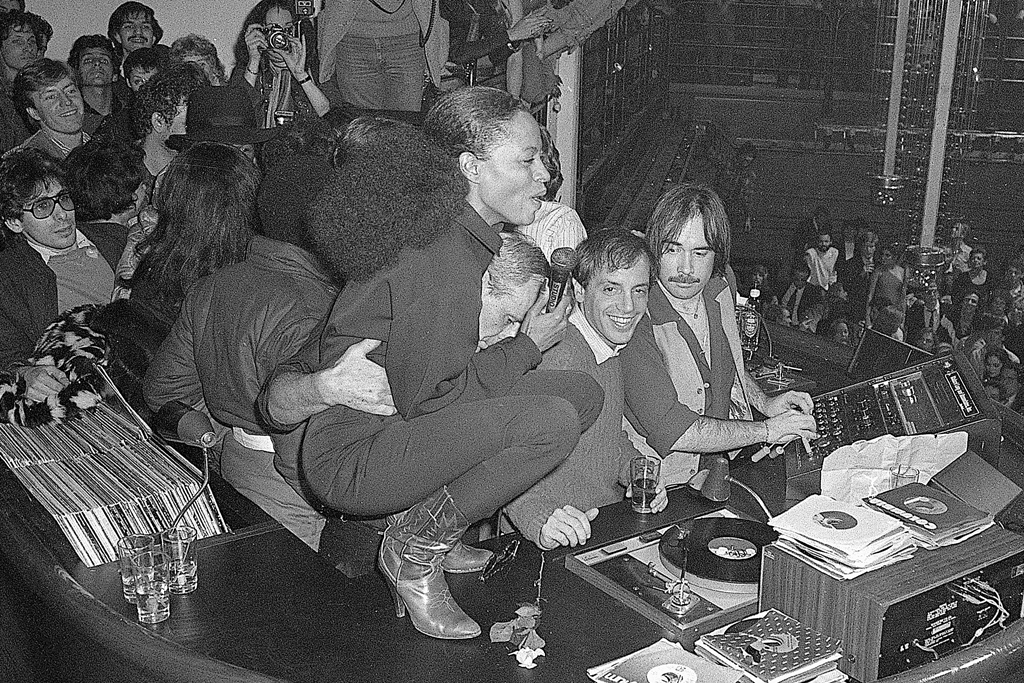 Much of the current interest in roller skating lies with the nostalgia it evokes from its past heydays. Case in point: Netflix’s “Stranger Things” season 4, which has Eleven, Will and Mike at a vintage rink that captures all of the stylistic nuances of the mid-’80s.

The sport also conjures a particular type of celebrity party tableaux of the late ’70s and early ’80s, from Diana Ross gliding past the Plaza Hotel clad in a striped leotard and Walkman to Jane Fonda, Patrick Swayze, Prince and Cher letting loose at the infamous Flipper’s Roller Boogie Palace in Hollywood.

Nile Rodgers was there for it all. One of the founding members of ’70s disco band Chic, the musician is also known as a backbone of pop music, a behind-the-scenes powerhouse whose songwriting, producing and distinctive guitar licks have helped Ross, Madonna, David Bowie, Duran Duran, The B-52s and Daft Punk to create some of their biggest hits.

So it’s perhaps no surprise to learn that Rodgers played a similar role in roller skating at the time. Images from the roller disco era may not always include the musician, but he was a firm fixture of the scene, having skate dates with everyone from Madonna and Cher to Diana Ross — especially when the two were writing her 1980 album “Diana” (the duo recently reunited to play the Queen’s Platinum Jubilee at Buckingham Palace earlier this month).

Now, Rodgers is bringing his lifelong passion for skating to the current roller mania, as the “Groovemaster” of ceremonies at DiscOasis, a roller disco that debuted last year in Los Angeles and has just opened at New York’s Wollman Rink in Central Park. Ahead of the unveiling, FN spoke to Rodgers — who is currently on tour with Chic in Europe and continues to himself influence fashion, playing at shows for the likes of Gucci and Chanel — about all things roller skating, from his best skating buddies to his own “Stranger Things” fascination, and why he’s excited about fashion now.

When did you start roller skating?

I had a bicoastal lifestyle and during my formative years is when I really became a crazy roller skater, from about 12 to 15. In L.A. our main roller rink was the Sunset in Hollywood. It was on Sunset one block west of Western, perpendicular to the Hollywood Palladium. We also used to skate on the 10 freeway. I was there when they built the 10! There were no cars on it, these Japanese guys who had these hot rods would sneak on at night. That was the way we would get to Santa Monica.

And then roller skating came to New York at the Empire, the Roxy, another joint called High Rollers, another spot called Busby’s. So I used to hit all of them. They were amazing during the ‘80s.

Why do you think roller skating is making a comeback now? Was it just the pandemic — or is it something else?

It’s not clear to me what the motivation is for others, but I know that as soon as I got involved with DiscOasis, I was like yeah this is where you belong. There is a freedom to skating outdoors. We skated a lot outdoors as kids but that was only to get to a destination, to a place where we were going to skate.

The skate community, I don’t want to say that it’s utopian, but for the most part the skate community is very loving, they really care about each other. They’re like musicians, when you’re playing an instrument and you ask a musician for help, they will show you a technique. If you see someone doing a routine and you go over next to them, they will teach you the routine. They aren’t possessive. So maybe people start to see that type of camaraderie. Believe it or not, I skate at 4 or 5 in the morning when no one is out. At my apartment in Miami Beach, when I’m skating at that hour there are clubs in open 24 hours, so I pass these people dressed to the nines. When I’m on skates, everyone is so cool with me.

What do you love most about skating?

I’m going to try and explain this and not be overly romantic. But when you’re on skates, it’s as close to being — I won’t say a superhero — but almost like an augmented human being. You can move faster than if you were just running, you can do spins like even the greatest ballerina couldn’t do. There is something that feels almost like a superhero, like Spiderman. Like you’re a bird or something!

The basement of my house in Connecticut has a concrete floor, so I skate down there all the time. I’ve done music videos where I was roller skating and it looks like I’m skating at a big disco but it’s in the basement. The muscle memory for skating on hard wheels on a hard floor is like walking to me because you have total control. I never skated on these soft durometer outdoor wheels, they were not part of my world. Everything I do is sliding and hockey stopping, I don’t know anything about toe stopping. I don’t put toe stops on my skates — they come off first thing! So I put the skates on and I’m like whoa! The powers that be at DiscOasis hooked me up with some Moxi skates and they’ve got serious durometers. It’s like skating on a balloon.

You have skated with a lot of fellow musicians. Where did you take them?

I remember skating with Cher at High Rollers, which is in New York, and at Flipper’s in L.A. And the Roxy (in New York). It made no difference whether we were in New York or L.A. I don’t remember Cher being a Santa Monica Pier person because I wasn’t, but we definitely skated at Flipper’s.

And I remember the first time I took Diana Ross to High Rollers. We had so much fun. People weren’t all over her because she was Diana Ross, they were there to help and teach her moves. She just had a blast, it was incredible. I make it sound like we only went once, but that would be impossible. We did it a lot. I did an entire album with her, I went out partying with her every night. We were and still are good friends, we just played the Queen’s Platinum Jubilee together.

Roller skating had a big scene in everyone’s current favorite show, “Stranger Things.” Have you seen it?

Of course! I loved it, are you kidding? “Stranger Things” is one of my favorite shows because for people my age, we get to go back and see all the stuff that was normal, everyday stuff and how it was used at the time. Using walkie-talkies, things like that. If you said walkie-talkie to a kid right now, they wouldn’t know what you’re talking about!

What do you make of what’s happening in fashion right now?

I think it’s honestly some of the most exciting times because there are no holds barred, everything is cool now, you can do whatever you want. One of the most important things I’ve ever heard was from a famous jazz musician who was known for his looks. Someone asked him one night, why do you get dressed up like that and his answer was, because the people see you before they hear you. I thought how cool is that and how correct is that? Before you’ve played a note, they’ve looked at you and summed you up. That’s your first impression, now you have to hope that the music is on that level or above the way you look.

When I put together my band Chic, that was always important. We started out with Norma Kamali, the Fendi sisters, Jhane Barnes, Calvin Klein, this New York collective. I remember Norma Kamali’s stuff was cool for guys and girls, this unisex look. And then the Japanese designers, Kansai Yamamoto and Yohji (Yamamoto), all of this unconstructed stuff and in Toronto this parachute clothing. It was totally normal for us to go to Patricia Field, shop and spend the whole day there, looking for the most uniquely curated thing you could find. That’s what New York City was, it was really the only place that you could find certain things. Your jeans had to be customized. I’m not dissing anyone but your jeans had to be made by people whose names were not big.

Fashion is once again referencing the ’70s. Why do you think it continues to mine this era?

I think that it was a time when our voices seemed the loudest. It seemed like people were listening to us, taking notice of what we were talking about. We felt like we were the generation that ended the Vietnam War, we took the Black Power movement to a whole new level, we were the people that supported the gay rights movement, that supported the women’s lib movement. We were there in the thick of it, and to have all of these new heroes, they replaced in the day to day world the Malcolm Xs, the Huey P. Newtons, the people that had come before. It was a new style of revolutionaries, they stood out in a different kind of way, they stood out in a fashionable way. I was a studio musician and the first time I met Liza Minnelli she walked up to me and before even saying hello she just looked at all the clothes I was wearing that I pretty much designed myself and she said “I want that, I want that, I want that.” How cool is that? Liza wanted my clothes. I had made those pants.

Music is seeing a similar revival. As someone whose songs have been sampled a lot, what do you make of these references?

I think that it’s not going away any time soon, I don’t think it’s reached its apex yet. Take us for an example, we (Chic) were not the biggest thing in the world but we are sold out, we are playing to crowds right now as big as 40,000 – 50,000 people. It’s crazy. And you can see that even the youngest people in the audience have an emotional attachment to it. Guys are at our show are crying.

What would you wear roller skating when you were younger? What do you wear now?

I would wear the exact same clothing that I would go out to party in. I’m 14 or 15 years old and we were wearing sharkskin suits, with ruffled shirts and wraparound French cuffs and cufflinks with bogus gemstones. We were all of 14 or 15 years old and that’s how we went roller skating. We knew we would never fall. There was no way I was going to mess up my sharkskin suit!

Now because I’ve had a torn meniscus, my left knee has been weaker, so I wear knee braces underneath, and typically the trousers I wear are baggy. I’m a big fan lately of cargo pants so I can keep stuff in there so I don’t have to skate with a backpack. Typically I wear camo cargo pants and that’s the same thing that I would wear if I went out to a party.

This interview has been edited for clarity and length.