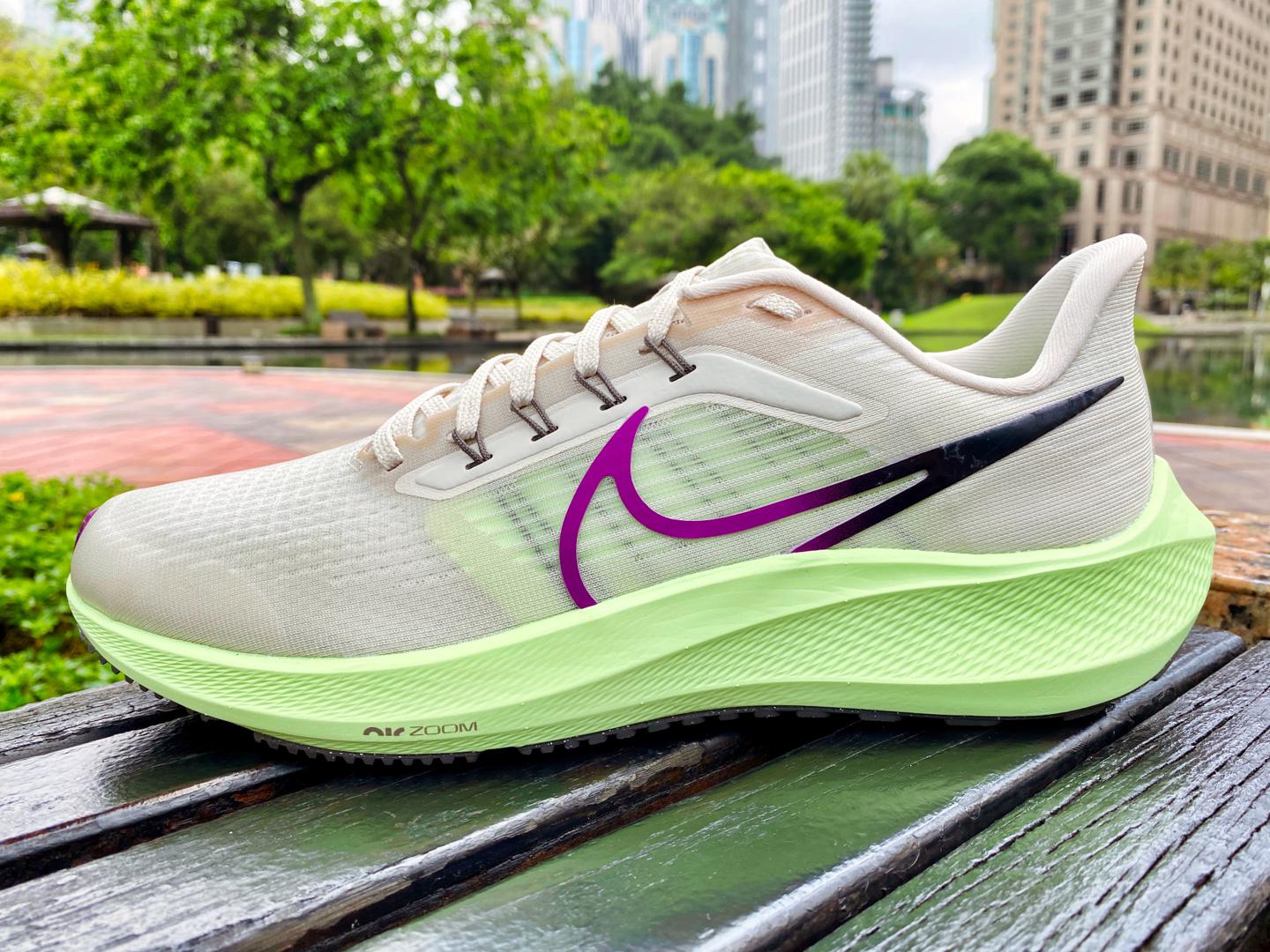 I hope whoever came up with the Pegasus name and coined the term, “your workhorse with wings” got a very, very big bonus. That’s exactly what the Pegasus is, it’s a running shoe that’s built like a tank and designed for nothing else other than to withstand hundreds of kilometres.

If you think that the Pegasus doesn’t sound like an exciting shoe, you’d be very accurate in your assessment. That’s how good Nike’s marketing is: they’ve managed to make a non-exciting shoe the most popular running shoe in the world.

My first experience with the Pegasus was the 30th version, 9 years ago. If I’m being brutally honest, I was really disappointed with it because it lacked flair but back then, I didn’t know what the Pegasus was all about.

The Pegasus is not designed to knock your socks off or amaze you. You only come to really appreciate the Pegasus after five hundred kilometres when it looks and rides as well as when you first bought it.

My favourite version was the 32. Its fit was perfectly suited to my feet while the ride felt smooth and consistent because this was before they started putting Zoom Air in the forefoot. Version 35 was also good but the ride was noticeably flatter due to its thinner, full-length airbag.

Every second year, the Pegasus gets a major update where its upper, midsole and outsole get updated. This year is the major update year so you can expect changes, although that doesn’t mean much because it’s a Pegasus after all and they want to stay consistent to keep their loyal fanbase.

I ordered my Pegasus 39 in the Orewood Brown/Barely Volt colourway. I originally had mixed feelings about it but since then, it has really grown on me. The brown upper has a 70’s retro look which fits the retro theme of it.

The first time I laced the Pegasus 39 up and walked around in it, I noticed that the upper was more comfortable than the previous version’s upper. The new midfoot design made it conform to my midfoot much better than the last 2 versions.

I also noticed that the lump under my forefoot where the Zoom Airbag is situated was more prominent than in the last version. This is a uniquely Nike characteristic and you normally, eventually get used to it over time.

When I tried on both the Peg 38 and 39, the foam of the 39 felt slightly softer than the 38 which is why the airbag felt more prominent than in the last version. Nike must have changed the formulation of the React foam because it feels a bit squishier and more airy.

My first run was 10km at a very slow, easy pace with some faster downhill segments. I noticed that the Pegasus 39 felt much better and more lively at faster paces below 5.30 minutes per kilometre than at slower paces.

When going slowly, the airbag under my forefoot felt intrusive, like it was getting in the way. When I picked up the pace, the lumpy sensation disappeared and the forefoot became more responsive.

The upper felt warm on that first run and the ride also felt bottom-heavy because of all the thick outsole rubber. The thick outsole also made the ride feel “slappy” which is something that I’ve noticed with all the Pegasus’ that I’ve tested.

The Pegasus 39 is now back to dual Zoom Airbags: one in the forefoot and one in the heel, which is the same setup as the Pegasus 33 and 34. Versions 35 and 36 with their full-length Zoom Air units made the ride feel much smoother but they were noticeably less cushioned and they had a flatter ride.

You still get React foam in the Pegasus 39 but this React feels slightly softer underfoot compared to the React in the Peg 37 and 38. Just by squeezing it between your fingers, you can tell that it’s more squishy. The new foam formulation is the biggest cause of the overall weight decrease because the outsole and upper haven’t changed much.

I enjoyed running in the Pegasus 39 most for short and middle distance runs below 20 kilometres at steady paces between 4.30 and 5.30 minutes per kilometre. That’s the sweet spot. Anything slower than that and the Zoom Air bag was too intrusive while I found the sole unit not lively enough for anything faster than 4.30.

One of my favourite things about the Pegasus 39 is how stable it feels underfoot. Due to its relatively firm midsole, there isn’t much lean bias so my foot strikes always feel planted and cornering feels comfortable.

The Pegasus 39’s outsole is familiar but slightly different to its predecessors. It has the same layout with carbon rubber on the heel and blown rubber on the midfoot/forefoot. The main difference is that there are now 2 horizontal flex grooves which extend the entire width of the forefoot so the Peg 39 has more forefoot flex.

Another small difference is that there are now small, square cutouts on the midfoot and forefoot of the Peg 39 which expose the midfoot foam. This is where the Peg 39 manages to shed a bit more weight over the last version.

The outsole has aggressive lugs which provide great traction on light trails and grassy terrain but due to the firmness of the rubber, the Peg 39 feels slippery on smooth, wet surfaces.

When it comes to durability, the Pegasus 39 is once again first-class. It’s built to last, so you can expect the React midsole to not lose much cushioning over time and the outsole to outlast the rest of the components of the shoe. The upper is also thick and shows no signs of weakness.

Flywire makes its triumphant return on the midfoot of the Pegasus 39. The reason that Nike changed from Flywire to thick straps on the Peg 37 and 38 was that they supposedly distributed pressure more evenly across your midfoot but I think that Nike realised that Flywire doesn’t cut into your feet if done correctly (like in the Peg 39) and it comes with a weight-saving advantage as well.

The tongue of the Pegasus 39 is asymmetrical and padded. It’s similar in shape to the Peg 36’s tongue but much thicker so it protects your instep from lacing pressure much better. The tongue is attached to the inner sleeve so there’s no tongue slide but it does make the shoe very warm. Breathability is not very good and even when I run between 6AM and 8AM here in Malaysia, I can’t wait to take the shoes off and cool my feet down.

Foot lockdown is excellent in the Pegasus 39. There’s an internal heel counter which provides adequate heel support as well as double eyelets for runner’s knot lacing. I found that I preferred using a runner’s knot for a more secure foothold but it’s not vital that you use it.

The Pegasus 39 runs true to size and has an accommodating but not roomy toe box. The length is perfect and the width should also be comfortable for most normal foot types. Overall, it’s not as comfortable as a Brooks Ghost 14 or a Saucony Ride 15 upper but it’s still very comfortable, even for all-day casual wear.

In a way, the Pegasus 39 feels like a throwback, retro version of the Pegasus. The reintroduced Flywire cables along with the return of the dual airbag setup make the Peg 39 feel like a Pegasus from 5/6 years ago.

The upper is more comfortable than last year’s version because of its better fit which conforms to the foot more while it has a slightly softer ride due to the new midsole. The weight reduction is also a welcome change so the Pegasus 39 is worth upgrading to.

There’s no denying that the Pegasus midsole feels outdated. React foam combined with Zoom Air is not engaging, nor is it exciting or innovative anymore. It is however extremely durable, so you will have to decide which factor is more important to you. I would rather choose a fun, exciting, bouncy shoe rather than a durable one.

The new Saucony Ride 15 is lighter, more versatile and it feels like a more cohesive, polished package. The Pegasus 39’s sole unit makes the ride feel disjointed because the airbags don’t blend in, they feel like separate components.

If you buy the Pegasus every year, you already know what you want and that’s exactly what you’ll continue getting in the Pegasus 39. This makes the update consistent and decent. At $120 it’s also still one of the cheapest mid-range, neutral daily trainers and the most durable which makes it an excellent value proposition.

As editorial policy, we do not accept free samples from companies.
We purchased this pair of Nike Air Zoom Pegasus 39 at Running Warehouse with our own money.