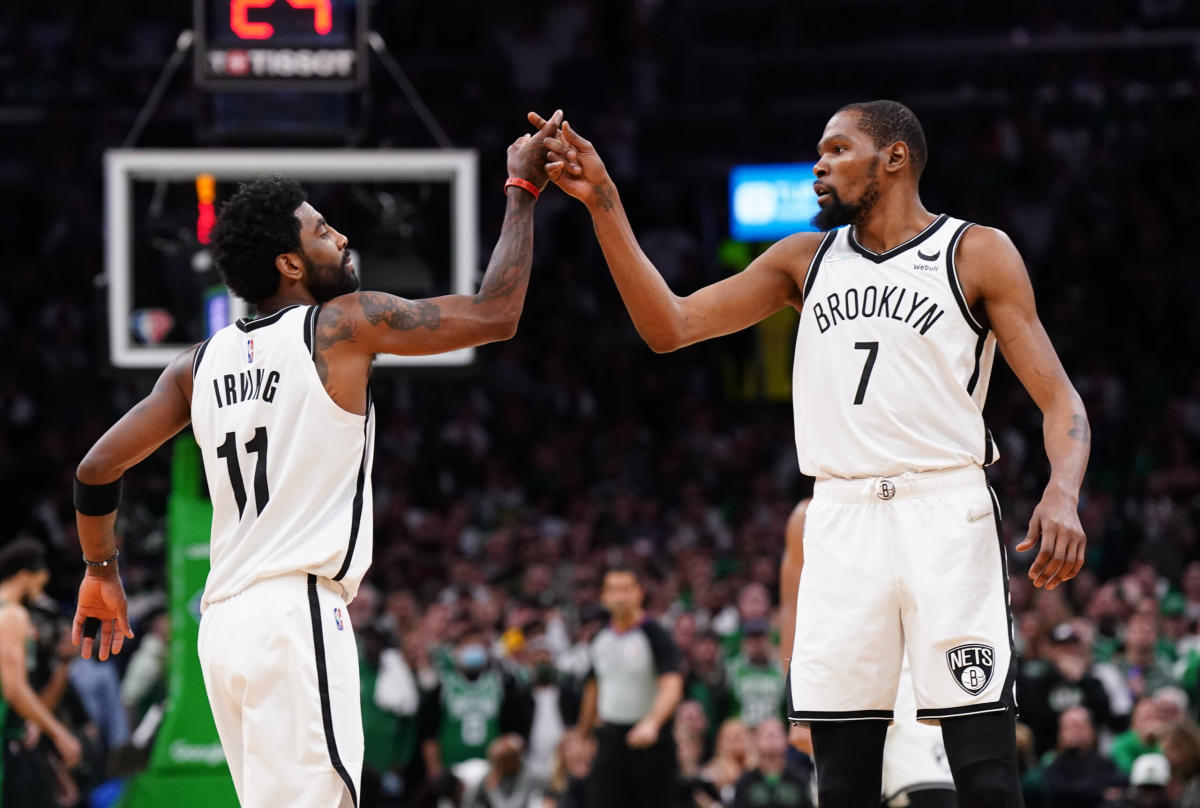 When Kevin Durant and Kyrie Irving joined the Brooklyn Nets back in the 2019 offseason, it was expected that the team would be competing for championships (plural) and reign among the NBA’s elite. Instead, in that three-year span, James Harden has come and gone, now replaced by Ben Simmons, Durant has already tried to get out and Irving’s off-the-court antics have slowly gone from being somewhat silly to indefensible.

The 2022-23 Nets, with the turmoil (maybe?) behind them, project to be one of the strongest teams in the league… on paper. Will things hold steady enough for Brooklyn – behind Durant, Irving and Simmons – to contend for a championship? That remains to be seen.

* Kevin Durant remains one of the best players in the world… Even with the tumultuous past 18 months for the Nets, they can still be comforted by the fact that they have one of the best players in KD. And when you have a piece as good as Durant leading the charge, contention for an NBA title is never out of the question. Sure, his 2022 playoff run left a lot to be desired, but just one postseason prior, Brooklyn came literally inches from what could have been a Durant game-winner to lead the Nets to the Eastern Conference Finals instead of the eventual champion Milwaukee Bucks.

* The roster around Durant is loaded and experienced… Yes, question marks remain about Irving’s availability on any given night – as well as Simmons’, for that matter – but there’s no question that on paper, this is one of the most loaded teams in the league. The Nets have Durant (No. 8 league-wide in our Global Rating stat over the past year) at the top, flanked by Irving, one of the top point guards in the league when he’s actually playing basketball, and Simmons, who will play a more off-ball role than he has prior in his career, provided he’s healthy and mentally finally ready to hit the hardwood again.

Simmons should be a monstrous defender for the team and give them quick buckets in transition and as an off-ball slasher. And even outside of that Big Three, which NBA 2K23 ranks as the NBA’s third-best trio, the Nets have an abundance of strong role players such as Patty Mills, Royce O’Neale and Joe Harris. Top to bottom, this is a very strong roster.

* Shooting will be strong… Even without Harris for most of 2021-22, the Nets still ranked a respectable 10th in the NBA in three-point percentage (36.1 percent), albeit while shooting the third-fewest number of threes nightly (31.7 3PA/G). Both of those marks will surely improve with a healthy Harris back in the fold next season, as the Nets marksman launched 5.8 threes nightly over his prior three healthy campaigns and hit an astounding 45.8 percent of them, leading the NBA twice in three-point accuracy over that stretch. With shooting being such a strength around a 1-2 punch as potent as Durant and Irving, the Nets should be a load to defend on a nightly basis in 2022-23.

* The availability of Irving and Simmons remains in question… Irving shouldn’t have an issue playing in all 82 games next season now that the vaccine mandate in Brooklyn has been adjusted. But this is Irving we’re talking about, so to expect him not to miss action for some sort of non-injury-related reason is bold and probably foolhardy at this point. Until proven otherwise, Irving’s availability will remain in question. The same goes for Simmons, who is reportedly healthy now and expected to be ready to go from the jump in 2022-23. Hopefully, for his sake, the mental health issues that he dealt with are in the past, too, and the talented Australian player won’t miss any more long stretches of time. But, again, this is something we’ll have to see to believe.

* Who is going to play backup center? … The Nets’ starter at center can probably be written down in pen at this point, as young big man Nic Claxton, an athletic, energetic almost-7-footer who can block shots, finish around the cup and defend on switches, looks ready to take on that role full time. Who can Brooklyn count on to take the backup role behind him, however? That remains to be seen, as the only true backup center on the roster is Day’Ron Sharpe, a big man with upside but who remains just 20 years old and only played in 32 games his rookie season last year. Maybe Simmons, as has been reported by beat writers this summer, can play some center in closing lineups. For now, though, this spot will be one to keep an eye on for the Nets, especially with LaMarcus Aldridge and Blake Griffin seemingly out of the picture.

* Who’s going to play defense on this team? … As the saying goes, defense wins championships – and that is even true in the offense-heavy modern NBA. Just look at the two teams that made it to the Finals last year as an example: Golden State and Boston. Both teams were stifling on the defensive end in the playoffs, with various high-level defenders on both sides, able to switch, trap, protect the rim, jump passing lanes, etc. Can the Nets come close to that level on the less glamorous end of the floor in 2022-23? The pickups of Simmons and Royce O’Neale will help in that regard, massively in the former’s case, as will the fact that Claxton is projected to have a bigger role from the jump next year with DeAndre Jordan long gone. For a team that finished 20th league-wide in defensive rating last year and had the third-worst defense in the postseason, it’s not clear if Simmons, O’Neale and Claxton will be enough to remedy matters and batten down the hatches defensively.

With the current build of the Nets roster, they have 14 players on standard contracts totaling $179 million in payroll and a $99.3 million luxury tax payment. How the season starts could impact how much they’re willing to spend. If things go well, they probably keep the team intact and pay the hefty penalty. If the team implodes, they could reduce payroll significantly if they reset the roster and trade one of their best players.

Outside of Brooklyn’s All-Star trio, their biggest tradeable salaries include Harris, O’Neal, Claxton, and Curry. They are limited in being able to trade just two far-out future first-round picks to help upgrade the roster. They no longer have multiple large trade exceptions and are just left with a $2.5 million trade exception as their largest. They also have their $6.5 million taxpayer mid-level exception available to them, but there aren’t really any free agents available worth the entire amount. – Yossi Gozlan

3rd in the Atlantic division, 5th in the Eastern Conference (as voted by the HoopsHype staff)