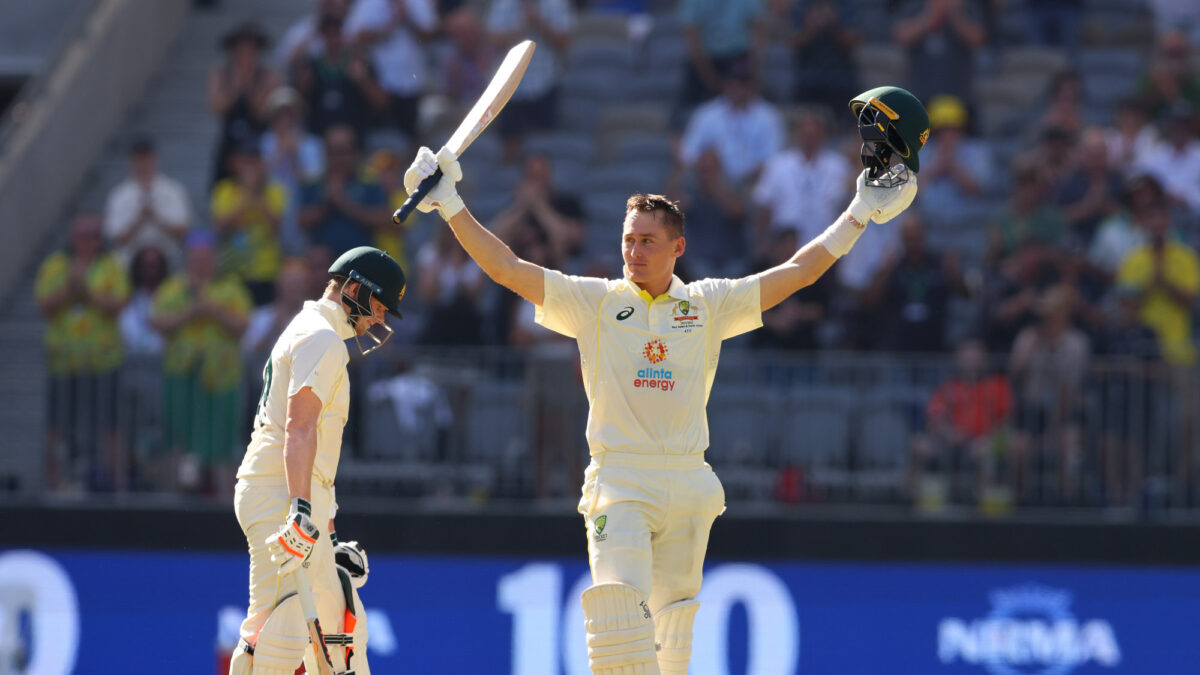 Marnus Labuschagne’s eighth Test century steered Australia into a dominant position on Day 1 of their series against the West Indies in Perth.

The Queenslander rode his luck, including regular edges through the slip cordon off young quick Jayden Seales, to start the summer in style, unbeaten on 154 at stumps after combining with first Usman Khawaja (65) and then Steve Smith (59 not out) as the home side reached 2/293.

It’s Labuschagne’s second Test century at Optus Stadium, following on from his twin efforts of 143 and 50 against New Zealand in the last Test at the venue nearly three years ago.

The ton had extra meaning for Labuschagne: it’s his first since becoming a father for the first time in September, with wife Rebekah and daughter Hallie in attendance to see him reach three figures.

“It was nice for her to see her first day of Test cricket and for me to be able to get a hundred,” Labuschagne said after stumps.

“Those are memories that sit with you for a very long time… it [scoring a century] was certainly a bit more special as a dad.”

The only downside for Australia was another low score from David Warner, the out of form opener dragging Seales back onto his own stumps for just 5 to continue a three-year lean spell that began following the onset of the COVID-19 pandemic.

After Pat Cummins won the toss and elected to bat in front of a sparse crowd at Optus Stadum – former coach Justin Langer appearing to bury the hatchet with the players pre-match after a series of media barbs doing nothing to get West Australians through the turnstiles – Warner’s early departure was the first and only sign the Windies could give Australia a challenge in their first meeting in five-day cricket since January 2016.

Seales remained consistently threatening – Jason Holder could have done more at slip to snaffle an edge flying past him, while Labuschagne in particular looked troubled by his pace and bounce – but with spinner Roston Chase (0/63 from 15 overs) attacked from the outset and Holder economical but unthreatening, he had few helpers.

A benign Perth surface, a far cry from pe-match predictions of a ‘green monster’ let alone the fabled WACA pitches of old, did nothing to help the cause, with sideways movement minimal all afternoon.

Watchful early, Khawaja began to sparkle, the left-hander’s remarkable renaissance in 2022 yielding yet another half-century. Patient against the quicks, Chase’s introduction into the attack brought more aggression, lofting him over long-off for six as he rose through the gears quickly.

At 1/72 at lunch, Labuschagne and Khawaja had set an ideal platform: the former would bring up his half-century shortly after the resumption, while the latter waited until the 42nd over to raise his bat. Coming off 110 balls, it was the perfect opener’s innings, and with Warner’s form waning, officially stamps him as Australia’s first-choice opening bat.

A fifth Test century of 2022 would prove elusive, though, with the unassuming medium-pace of Kyle Mayers with his first ball of a new spell drawing a tentative Khawaja poke and edge behind for 65.

Smith, though, was more than happy to continue the Windies’ torment; armed with a tweaked batting style and having self-described himself as being as comfortable at the crease as he has been in years, Khawaja’s wicket would provide no relief for the tourists.

Capitalising on a flagging bowling attack and merciless against anything short, Smith’s half-century would arrive off just 75 deliveries, via a crisp drive off the expensive Chase.

The day, though, was all about Labuschagne: drawing praise for a far more traditional approach to batting, eschewing some of his famous extravagances, three figures were brought up in style as a short and wide Seales offering was flayed to the boundary at cover point.

There were few loud calls of ‘no run’, even fewer expansive leaves, and his usual fidgets and quirky mannerisms were almost non-existent: aside from the occasional edge, this was as no-nonsense a century as he has ever made. 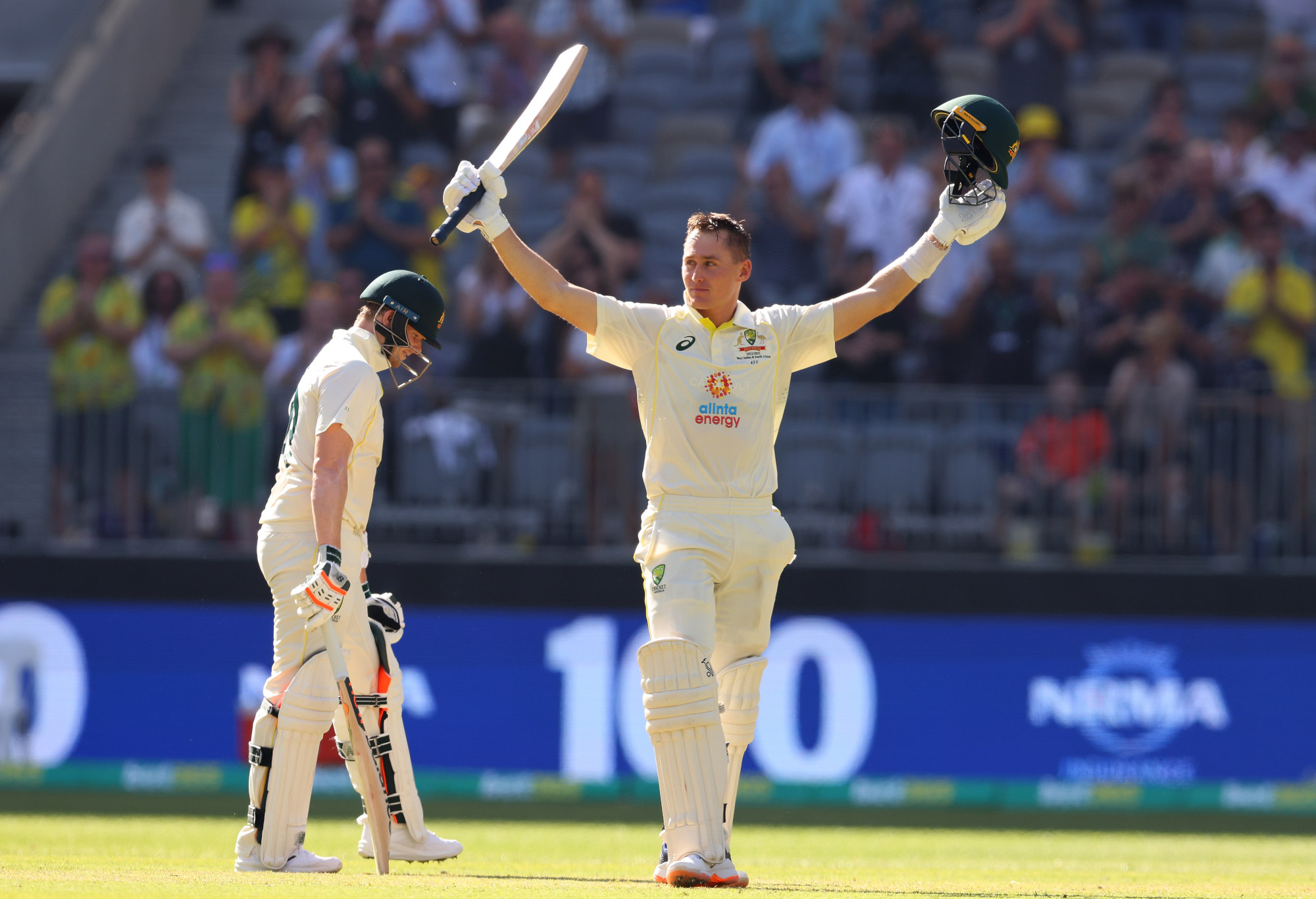 Labuschagne would continue to benefit from his extraordinary, multi-season run of good fortune, a wild cut late in the day falling just millimetres short of debutant Tagenarine Chanderpaul at deep point. On 136 by that point, it wasn’t as if he needed the help.

The Windies’ lack of penetration, meanwhile, was evidenced by taking until the 87th over to so much as call for the DRS, using the review on an LBW shout against Smith that, catching him on the very top of the knee roll, was the definition of optimistic.

There was just enough time for Labuschagne to raise 150, his fourth such score in Tests and first since January 2020, before stumps, surviving a jaffa from Holder with a cry of ‘Oh, Jason, that’s a delicious ball!’ to end play on an amusing note.

Speaking to Fox Cricket after play, Labuschagne credited his Queensland upbringing, regularly playing on fast, bouncy pitches at the Gabba, for preparing him both mentally and physically for the challenge of batting in Perth.

“It certainly helps coming from Brisbane, and you’re playing on a bouncy wicket all the time,” Labuschagne said of adjusting to the Optus Stadium surface, where he now has 347 runs in three Test innings at an obscene average of 173.5

“You’re used to leaving the ball and understanding the tempo of the game, that runs come in patches.

“You don’t always score very quick, like in Adelaide or Sydney, but if you’re patient, you’ve got a good process, you can score big runs.”

For all the Windies’ battles throughout the day, it was to their immense credit – and an indictment on other recent touring teams to Australia – that they completed 90 overs well before the scheduled close of play despite a four-man pace attack and only 16 overs of spin from Chase and captain Kraigg Brathwaite.

Also meritorious was Brathwaite’s consistent attacking fields – at least two slips remained in the cordon throughout the day, for all the good it did. On a day like this, though, any further praise would be nothing more than patronising.

The last time the West Indies came to Australia for a Test series, in 2015/16, they mustered just 12 wickets across the three matches. If Day 1 seven years later is any guide, the tourists are in for a similarly exhausting time of it this time around.