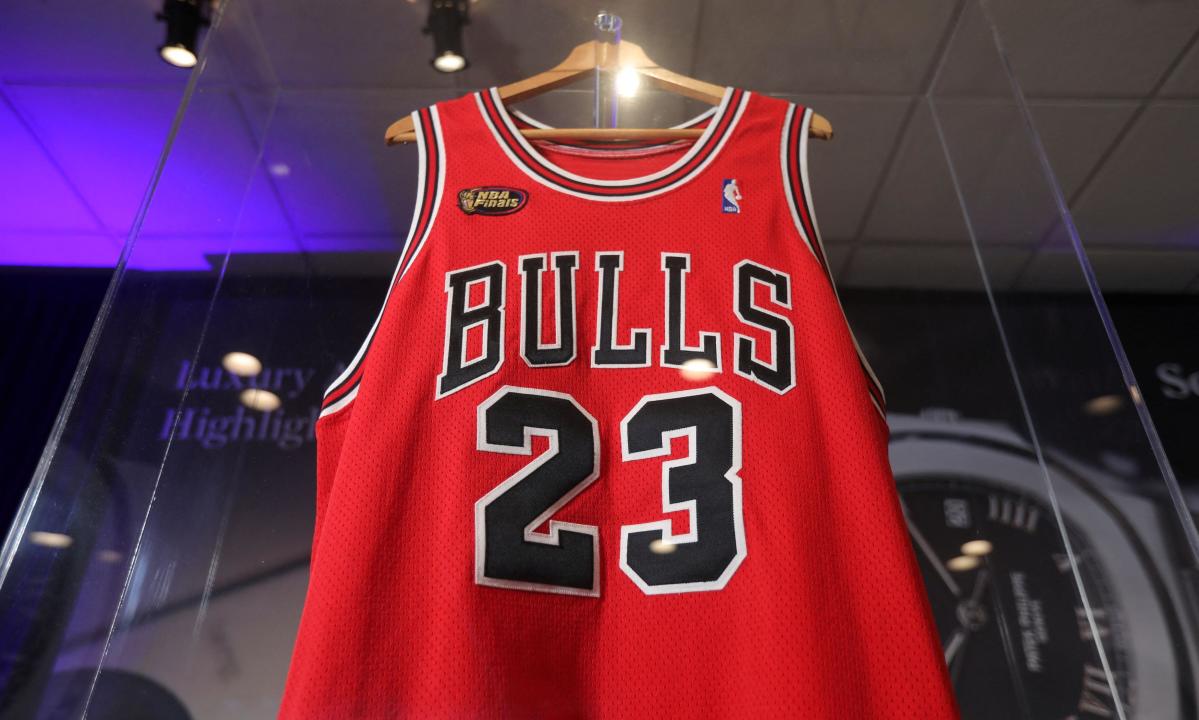 During his stellar basketball career, Michael Jordan was famous for his gravity-defying dunks and redefining the bounds of what seemed possible. Now a jersey won by the former Chicago Bulls player in the 1998 NBA finals – a period chronicled in the hit Netflix documentary The Last Dance – has also sent jaws dropping by attracting a record price of $10.091m (£8.85m) at auction.

The sum, more than double the initial estimates, set a new auction record for a piece of game-worn sports memorabilia, according to Sotheby’s. The previous highest was the $9.28m (£8.14m) paid for the shirt worn by Diego Maradona during the “Hand of God” game against England at the 1986 World Cup.

Related: The Last Dance is spectacular but leaves the real Michael Jordan up in the air | Barney Ronay

Jordan wore the jersey in Game 1, scoring 33 points in a loss against the Utah Jazz. However, he then led the Bulls to a brilliant comeback as he gained his sixth NBA title ring. Sotheby’s said it was one of only two of Jordan’s jerseys worn in a NBA finals game to ever appear at auction and billed it as “one of the most significant items from Michael Jordan’s career”.

“The season itself is his ‘magnum opus’ as an athlete, and a testament to him as a champion and competitor,” added Brahm Wachter, Sotheby’s head of streetwear and modern collectables. “Finals jerseys from Jordan are remarkably scant and the [1998] finals are arguably the most coveted of them all.”

Wachter said there had been considerable interest in the jersey. “In the weeks since we announced the auction, there’s been palpable excitement from not only sports fans, but collectors alike who are eager to own a rarified piece of history,” he added.

The sale of Jordan’s jersey is another example of the remarkable boom in memorabalia in recent years.

However, six months’ later that record was smashed when the original copy of Pierre de Coubertin’s 1892 speech, outlining his idealist vision for a revival of the ancient Olympic Games, sold for an astounding $8,806,500 (£7.72m) – besting the high estimate by nearly $8m and setting a new world auction record.

Baseball cards have also proved extraordinarily popular, with the Honus Wagner T-206, portraying the legendary Pittsburgh Pirates player nicknamed ‘The Flying Dutchman’, one of the most collectable. Less than 100 are said to be in circulation, with the latest selling for $7.25m (£6.36m) last month. However the overall record for sports memorabilia still stands at the $12.6m (£11.05m) paid for a Mickey Mantle baseball card.

There are still relative bargains to be had for those with deep pockets looking for a momento from their sporting idol. Earlier this week, Sotheby’s sold a signed Roger Federer racket used at the 2011 French Open for a relatively modest $50,400 (£44,195), while a pair of signed Serena Williams’ Nike trainers went for $5,292 (£4,640).