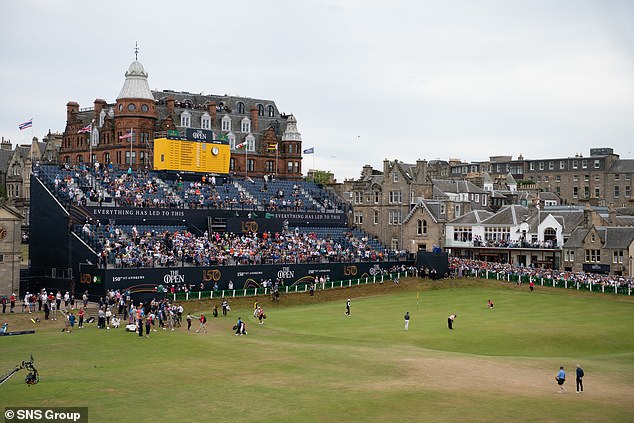 There are some who argue that this needs to happen. That if St Andrews offers up a round of 60, or even 59 this week, the furore it will cause will be good for golf.

The way the sport’s most historic venue can be overpowered, it is said, means that something will have to be done. About the clubs, about the balls, about the way modern technology has placed some of golf’s greatest courses on the brink of obsolescence.

If St Andrews is humiliated by big hitting and benign conditions, the sport will have to act or risk losing its history and tradition, not to mention much beauty and charm.

And yet isn’t what may unfold at the 150th Open this week not the next step in the game’s evolution, another example of its delicate balance between risk and reward? Yes, there are greens on par fours that are vulnerable from the tee. But with that reward comes the risk of not hitting them. Bunkers, gorse, horrid undulating lies.

Turning a par four into a par three is rarely as straightforward as gripping it and ripping it. John Daly won with that gameplan on his lips in 1995 but the Old Course never surrendered: he was just six under par and needed a four-hole play-off to beat Costantino Rocca.

Still, fear looms large. Lee Westwood thinks the best players will murder the course unless a wind of 15mph or above is blowing, and one estimate is that six of 14 par four holes are drivable in calm conditions. The course record is 61, set by Ross Fisher in 2017, and it is there to be broken.

Yet is that such a bad thing? Aren’t all records there for the taking? Isn’t that sport? And even if the leaders are all shooting scores in the 60s, one will do it better than anyone else, and he will be champion.

Equally, think of it like this: are we seriously contemplating abandoning the home of golf, or interfering with one the game’s great spectacles – big hitting – because it’s a nice day? What if it blows? It did in 2015 and the tournament finished on Monday because St Andrews became unplayable. So these are fine margins.

In 1999, Carnoustie was set up like a US Open venue with punitive rough and narrow landing strips, in parts 15 yards in width. Then the wind blew. The result: carnage.

After day one, the leader was level par. By day four, Paul Lawrie won a three-way play-off of those finishing six over – and 10 over got a place inside the top 10. The last five winners of the Masters are a combined 68 under par. Nobody is talking of abandoning Augusta National.

The beauty of St Andrews is its capricious nature. First time visitors can find it bland, almost featureless, yet it has subtleties that leave other championship courses gasping. 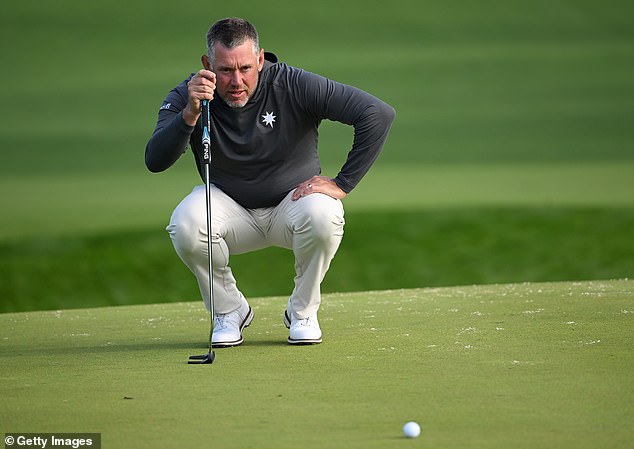 Westwood says that on the second shot at the Road Hole 17th, a player is confronted with three options: a six iron way left, a seven iron short right or a straight five-iron.

He makes the point that few courses demand thought in this way and that at many all will follow the same line. He’s right. Matt Fitzpatrick’s US Open win broke a run of, largely, American beef.

Between 2016 and 2021 the winners were Dustin Johnson, Brooks Koepka, Gary Woodland, Bryson DeChambeau and Jon Rahm as measures brought in to restrict the big hitters actually worked in their favour. Conversely, as landing strips narrowed, so accuracy mattered less because everybody was in the rough. The longest drivers, however, were in it 50 yards nearer the hole.

That is the problem with trying to tame golf technology or guarding against low scores. Think this is a 21st century problem? The first person to drive the par four 12th in an Open at St Andrews was Craig Wood in 1933. Sam Snead then did it in 1946.

As Snead arrived in the town by train that year, he is said to have looked out of the window and remarked: ‘Look, there’s an old abandoned golf course.’ He was politely told that it was the Old Course at St Andrews. The home of golf.

So leave it alone. And leave the game alone, too. You can hit it a long way? Great, let’s see that. And if it works for you, well that’s great, too.

There should be an advantage gained for the boldness of big hitting. Snead wasn’t averse to it. Neither was Jack Nicklaus or Tiger Woods. And if 60 wins on the last day, so be it.

Next time, it might be windy. And who’s your money on then?

EDDIE’S GOT IT ALL WRONG

One problem with describing everything as a World Cup warm-up, as Eddie Jones does, is that when you get a genuinely good result as England did in Australia at the weekend, you have already undermined the impact by branding it a glorified training session.

SERENA’S THE DRAMA QUEEN OF SW19

John Prescott was nicknamed Two Jags and never lived it down. So what are we to make of Serena ‘Five Courtesy Cars’ Williams.

It was revealed she snubbed the Centre Court centenary celebrations last week because Wimbledon refused to let her keep her five courtesy cars for the tournament having been knocked out in the first round. 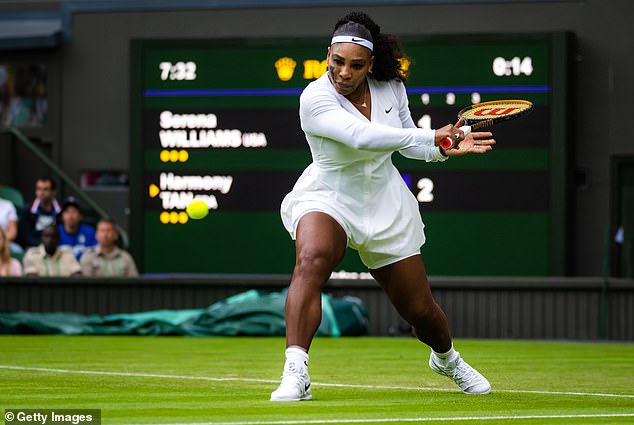 Wimbledon’s policy is to let players have transport for 24 hours after their tournament exit. Eliminated by Harmony Tan on the first Tuesday, Williams demanded a 12-day extension.

She’s the greatest player, and no one disputes that. But the next time there is a tantrum aimed at some poor umpire on Centre Court, do not forget the life of incredible entitlement and privilege the elite stars of tennis lead, and remember whose side we should be on.

The City Football Group’s acquisition of Palermo in Serie B is disturbing for one reason. The colours.

There are not many football clubs that wear pink, but Palermo do. It’s fantastic and utterly distinctive.

Yet CFG have, in the past, made changes. Melbourne Heart, the club that became Melbourne City, played in red and white stripes. Mumbai City wore a darker blue with a red sash. Both now ape Manchester City.

See also  The Open: Georgia Hall backs Tommy Fleetwood and insists 'it is a joy to watch' Tiger Woods

There have been other, smaller, compromises. Atletico Torque in Uruguay, now Montevideo City Torque, have always worn pale blue shirts, but since the CFG takeover have ditched their black shorts and socks for white. Pale blue stripes have been added to the blue shirt of Troyes in France.

It may be that Palermo are safe. Lommel in Belgium remain green, Girona in Spain have stayed red and Chinese club Sichuan Jiuniu continue in yellow and all are part of CFG, too. Yet no previous purchases have a strip as distinctive as Palermo’s. City mess with that at their peril. 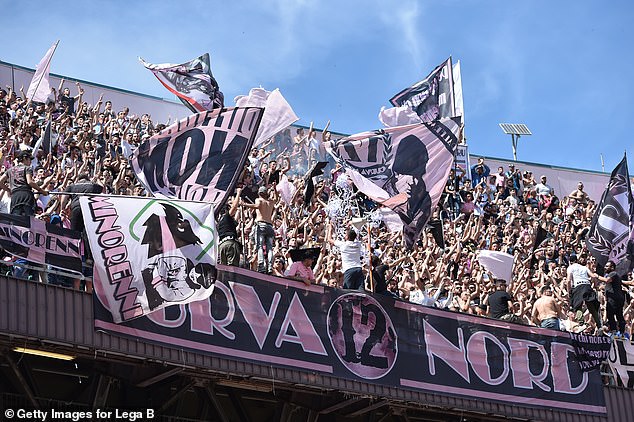 Those at the helm of the Saudi breakaway tour are planning to use a meeting of the Official Golf World Ranking body on Wednesday to press for the inclusion of their tournaments in its process.

Just as the puppet Pinocchio wanted to be a real boy, members of the LIV tour want to be treated as real golfers, despite their competitions having no cut, little pressure because so much of the financial reward comes guaranteed, a mere 48 players in the field and 54 holes. They didn’t want to play proper golf, but want to earn points like proper golfers.

They haven’t got Pinocchio’s charm, only his nose.

If Novak Djokovic is willing to undergo a Covid test daily – and by the sounds of it, he is – it does seem strange that he is barred from playing in the US Open next month.

Australia was a mess. There was confusion about the rules, confusion about his vaccination status and the whole process risked becoming a cause celebre for the anti-vax community.

This is different. There is no illusion about Djokovic’s stance any more and there are, plainly, ways around it. A proper PCR test, daily, would ensure public health is protected, while in no way undermining the pro-vaccination policy that is keeping the worst effects of covid at bay globally. 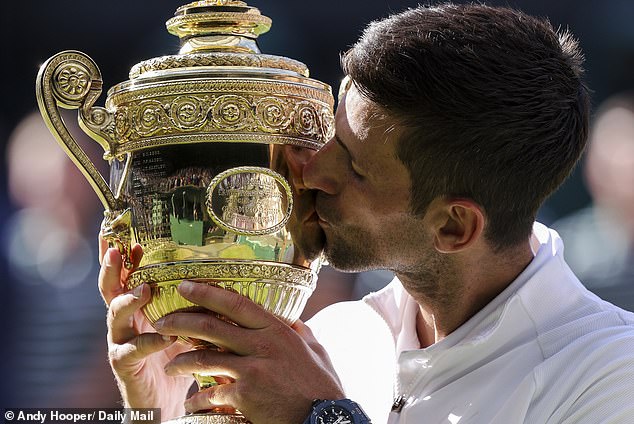 Let’s face it, anyone who isn’t vaccinated by now isn’t getting vaccinated. They’ve heard every reasoned argument. It’s personal choice.

The same would apply to the Chelsea players, N’Golo Kante and Ruben Loftus-Cheek, who have been prevented from travelling to America on the club’s pre-season tour. The difference being, one is a money-making exercise, featuring a series of non-competitive fixtures and, as such, unimportant to American interests; the other is one of the biggest tennis tournaments in the world and greatly diminished without the best player.

The US Open is better for having Djokovic  there. One imagines he wants to focus on tennis, and not climb on some anti-vax soapbox while in America, too. If that is the case, and he is prepared to test daily, surely a compromise can be reached, as will happen in Australia.

NO GROUNDS FOR CONCERN AT THE WOMEN’S EUROS

Against all evidence, the arguments around the venues for the women’s European Championship continue.

On Sunday, France played Italy at the New York Stadium in Rotherham. Capacity 12,021: attendance 8,541. There were 9,146 for Norway’s win over Northern Ireland, played at St Mary’s in Southampton, which can hold 32,384. Holland versus Sweden at Bramall Lane, Sheffield, attracted a robust 21,342 — but that’s still over 10,000 short of ground capacity.

This is not to say attendances are poor. They’re not. They’re good, they’re healthy. But the idea the biggest stadiums in the land should have been used remains fanciful.

What would that 8,541 have looked like at Old Trafford or the Emirates – or even the 21,342? It would merely have reinforced the idea that women’s football is unpopular. It would have set the image of the game back. 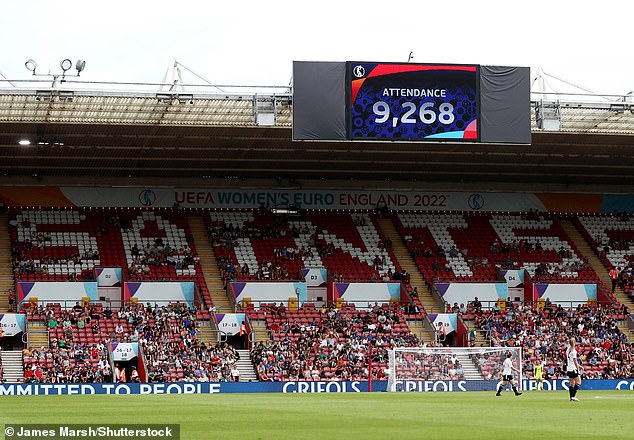 Bigger stadiums need not have been used to host matches for Euro 2022, as proven by crowds

At the weekend, a tiresome opportunist bookmaker flew a balloon over the Manchester City academy stadium that was hosting Belgium’s game with Iceland, with an arrow pointing at the Etihad Stadium and the message: ‘Anyone seen a stadium big enough for a Euros game?’

Yet the main stadium’s capacity is 53,400. For Belgium versus Iceland?

It is unfortunate that UEFA regulations banning terracing restricted the capacity of the Academy venue and only 3,859 watched, but that is on the governing body, adopting overbearing safety measures and making a small venue even smaller.

Yet, largely, the stadiums are suitable. The England games could take bigger, but the rest of the matches are well supported in mid-size venues where the crowd won’t get swallowed up by cavernous surrounds.

The Football Association have done their best. It’s a hard balance to get right.

MCCULLUM NO FAN OF ‘BAZBALL’

No doubt McCullum fears it is attracting too much attention, with sneers already emanating from Australia and South Africa, the next nation charged with bringing Ben Stokes’ England back to earth.

This is no surprise.

Jurgen Klopp ultimately hated the term heavy metal football, too. Not least because it grossly simplifies what his teams do.

EFL CHIEFS IN THEIR OWN LITTLE WORLD

What does the EFL think it is, some form of charity organisation?

Fresh from a business plan that equates to demanding ever-increasing sums from the Premier League, it is now upset with the BBC for spending £20million on Champions League highlights. 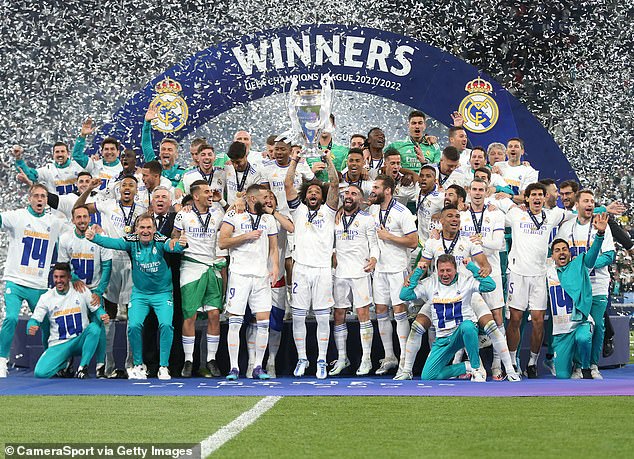 The corporation had previously rejected an EFL highlights package that would have come in at less than £500,000 a year.

Yet the BBC are hardly the first to conclude that elite football is more popular than what the EFL is offering. Once again, the executives in the lower tiers appear to believe they are owed a living. No wonder so many struggle.

QATAR IS THE PLACE TO START, MICHEL

Exonerated of fraud, Michel Platini says he will embark on a quest for truth.

The truth around how we come to be playing this year’s World Cup in Qatar would be a start.