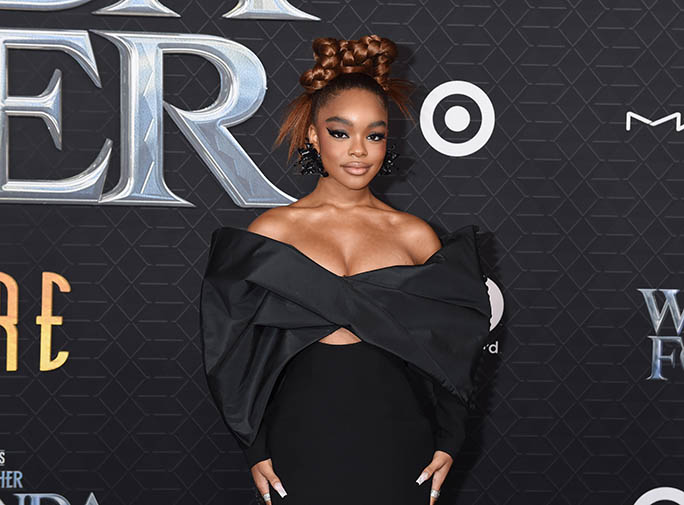 The “Black Panther: Wakanda Forever” premiere turned into a star-studded affair as several famous faces graced the purple carpet at the Dolby Theatre in Los Angeles on Wednesday night.

Marsai Martin was one of the many A-listers to pull out a show-stopping outfit for the occasion. The “Black-ish” star put a fashionable flair on a classic LBD for the event. Martin posed for photos in a black minidress by Azzi and Osta. The piece featured an oversized bow that fell off the shoulder, long-sleeves and a fitted skirt.

To further elevate her ensemble, the 18-year-old producer accessorized with dramatic statement flower earrings, a matching ring and long neutral square nails. For glam, Martin went with a glittery smokey eye and neutral matte pout. She styled her hair in a chic braided updo and left a few pieces out on the side.

Sticking to a monochromatic moment, the “Paw Patrol” actress completed her look with a set of black pumps. The silhouette featured a sharp, triangular pointed-toe and was set on a thin stiletto heel. Pointy pumps remain as one of the most versatile and timeless shoe styles. The slip-on silhouette matches a variety of looks easily, while the suede construction proves both luxe and durable.

PHOTOS: Discover all the star arrivals at the “Black Panther: Wakanda Forever” premiere.