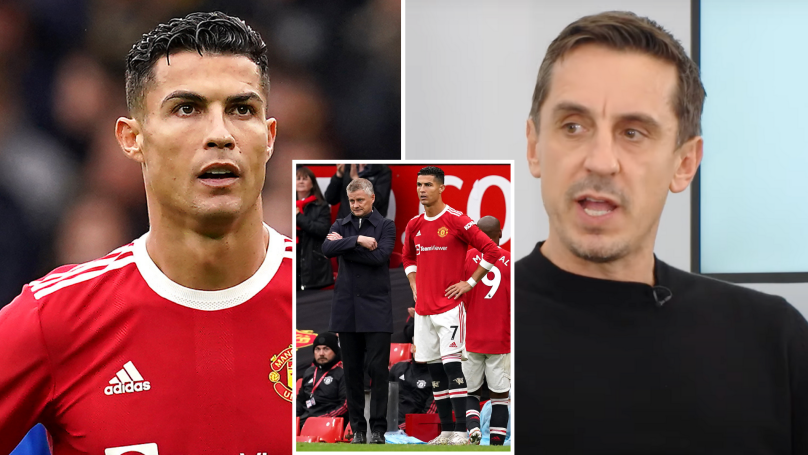 The Portuguese forward, who recently scored his 700th career goal, has been largely consigned to the bench under new manager Erik ten Hag this season.

He was left out of the squad for Saturday’s draw at Chelsea in the Premier League after his petulant reaction to being an unused substitute in midweek against Tottenham Hotspur.

See also  Israeli derby is delayed THREE times after crowd unrest, as 25 minutes are added on in first half

With United showing encouraging signs of progress under Ten Hag, Neville believes the Ronaldo situation must be resolved.

“Cristiano Ronaldo is going to have to go somewhere else and play every week because he can’t accept being on the bench,” Neville told Sky Sports. “That’s fine, but end it this week or create a truce to get to the World Cup and then end it.

Ronaldo walked down the tunnel minutes before the end of United’s 2-0 win over Tottenham and left the ground, conduct Neville claims was unacceptable.

“That’s the second time Cristiano Ronaldo has left Old Trafford and got in his car before his team have got back into the changing room,” Neville said.

“I have to say, as someone in the dressing room, it’s something that’s unacceptable. When you look at whether Cristiano should be selected, Manchester United are better without him — and Erik ten Hag knows that.

“The only thing that Cristiano and the club can do is get together in the next week and end the relationship.”

Another former United defender, Jaap Stam, said he understood Ronaldo’s frustration but said the 37-year-old is in danger of undermining his legacy.

“It’s not fair to him to be remembered for this situation. He’s been world class, I still think he is world class, and you don’t want to go into the history books walking off the pitch because you’re not happy not playing,” Stam said.